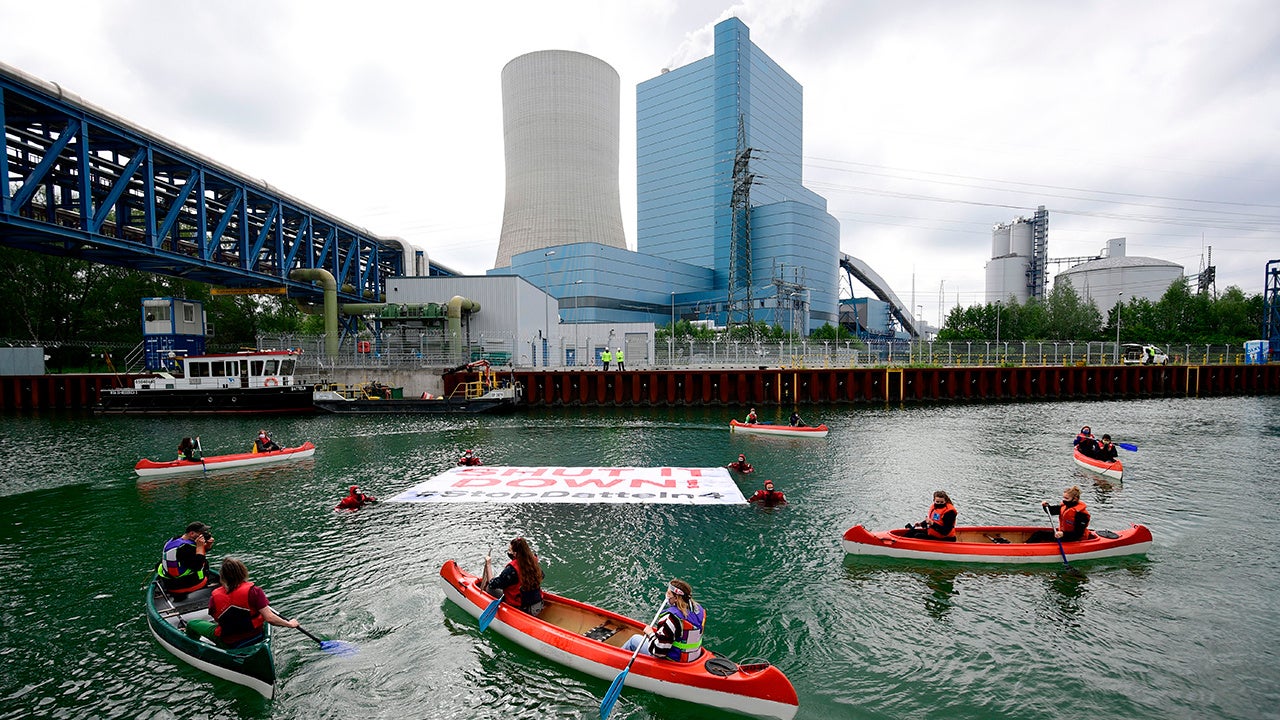 Activists of Greenpeace and Fridays For Future demonstrate on a canal in front of the cooling tower of the coal-fired power plant Datteln 4 of power supplier Uniper in Datteln, western Germany, on May 20. INA FASSBENDER / AFP / Getty Images

The Bundestag and Bundesrat — Germany’s lower and upper houses of parliament — passed legislation on Friday that would phase out coal use in the country in less than two decades as part of a road map to reduce carbon emissions.

“The fossil age in Germany comes to an irrevocable end with this decision,” said Economy Minister Peter Altmaier. Environment Minister Svenja Schulze called it a “great political success for all those who care about the climate-friendly future of our children and grandchildren.”

The legislative package has two main features. The first establishes a legal avenue for the gradual reduction in emissions by 2038 at the latest, while the second targets regional economies that would be impacted by the phaseout.

Preparing for the Future

Coal-producing regions in the German states of North Rhine-Westphalia, Saxony, Saxony-Anhalt and Brandenburg will have access to €40 billion ( billion) to help absorb the impact. Those funds are also expected to go towards restructuring regional economies, re-skilling workers and expanding local infrastructure.

Financial compensation is also be available to coal plant operators who face losses as a result of the early phaseout. However, compensation is contingent on operators announcing plans by 2026 to shutter plants and cease other emissions-intensive activity.

Michael Vassiliadis, who heads the IG BCE trade union, called the measures a “historic landmark.” He said the package has provided a safety net for workers affected by the phase out and would provide them with the necessary support to transition to future sectors.

However, not everyone agrees that the measures are enough to mitigate climate change.

Environmentalist activists say the legislation falls short of its ultimate aim, with Greenpeace managing director Martin Kaiser describing it as a “historic error.”

German Green party chief Annalena Baerbock said the legislation was “oblivious to the future” and instead called on the government to complete Germany’s coal phase out by 2030 the latest.

Earlier this year, a DeutschlandTrend survey found that 27 percent of Germans believe climate change is the most pressing issue facing the country, just slightly behind refugees and immigration policy.

Germany is seeking to establish a carbon-neutral economy by 2050. The European Commission has also pushed forward with similar plans for the EU.