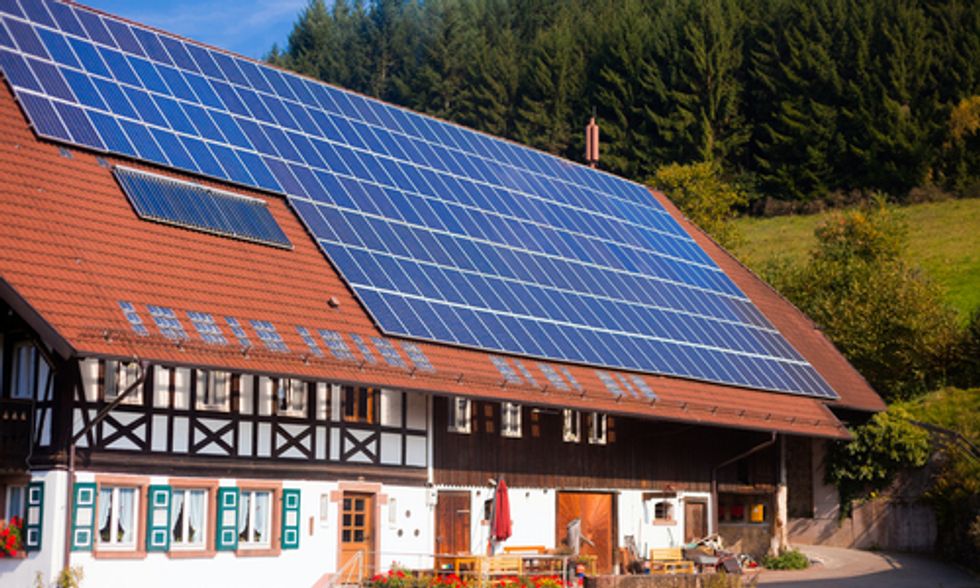 Benjamin Franklin once said, “half the truth is often a great lie.” Keep that in mind when you read a recent report prepared for our friends at the Edison Electric Institute (EEI) about Germany’s experience with renewable energy, including solar power.

Here’s the gist of the argument made by the energy consulting firm, Finadvice: Germany’s wholesale markets are suffering from “disequilibrium” because of increased consumer costs. The 86-page report is pretty much a hatchet job on renewables. “In conclusion, the lessons learned in Europe prove that the large-scale integration of renewable power does not provide net savings to consumers, but rather a net increase in costs to consumers and other stakeholders,” according to the report.

Really? That’s the problem with half-truths. Not surprisingly, there’s no mention of the enormous societal costs of the damaging pollution which is caused by burning fossil fuels and undeniably driving climate change.

So what’s the other side of the story—the one utilities fail to mention? In response to that question, the Solar Energy Industries Association (SEIA) today released a comprehensive study taking an in-depth look at Germany’s solar support programs and how the United States can benefit in the long term from the experiences of the world’s leading solar producer.

Prepared for SEIA by the widely-respected Brattle Group, which provides economic and financial consulting around the world, the new report examines, among other things, the rising cost of Germany’s feed-in tariffs (FITs) for solar PV and resulting reform efforts. Today, Germany has 35 gigawatts (GW) of installed solar capacity and is on track to hit 52 GW in the near future, representing about 7 percent of the nation’s wholesale generation.

Most importantly, the report found: “By and large, the German path has been remarkably successful, given the goal—shared by a great majority of the population—of ‘de-fossilizing’ Germany’s electricity sector.”

But the report also acknowledged that there have been growing pains, as well, with some critics calling Germany’s solar support programs too expensive.

“The primary lessons from the German experience are that a system of FITs such as the one used in Germany can be highly effective in promoting the growth of solar PV,” the report continued. “But FITs for new installations should be adjusted regularly and perhaps automatically … so as to avoid undue increases of electricity rates for retail customers.”

Yet the benefits of solar, according to the report, clearly outweigh some of the problems being experienced by Germany. One of these critically important benefits is reliability. “As the recent Ukraine crisis has shown,” the report stated, “the transition has also helped reduce the exposure of Germany to potentially volatile input prices to the traditional power system.” The report went on to say, “it is perhaps not surprising that the German system has been capable to remain highly reliable up to now, even with a significant and rising contribution of intermittent renewable energy sources.”

This is a thoughtful report—not a scare tactic—and SEIA plans to share its findings with policymakers and regulators nationwide.

Here’s my takeaway from the report: When you examine all of the facts, Germany is a lesson to be learned from, not an experience to be avoided. Admittedly, the costs of Germany’s renewable support programs, including solar PV, have been significant—and higher than expected. But that’s only part of the story.

As the report pointed out, there is also significant evidence that increased power production from the use of solar and other renewables is a major contributor to falling wholesale market prices in Germany, while also helping to significantly reduce pollution. For the U.S., the goal should be to improve solar support programs, not eliminate them. This new report reinforces that objective.

The Brattle Group report concluded by stating: “The reform efforts of the solar PV and renewable support programs in Germany should not be interpreted as an acknowledgement of a broad failure of the Germany systems of FITs. Rather, the reforms are indeed an effort to improve the design of the FIT system … Germany’s experience therefore likely provides an opportunity to ‘look ahead’ and see how electricity systems and the rules governing them will have to adapt when penetration rates of various renewable energy sources reach levels similar to those in German today and beyond.”

In the final analysis, let’s have a debate about renewable energy which includes all of the facts—from the costs of energy to the costs of pollution—and then decide what’s best for America in the long run.

Renewables Account For More Than Half of 2014′s New U.S. Energy Capacity