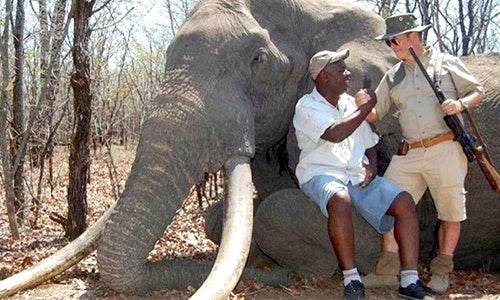 Just months after the killing of Cecil the Lion sparked intense Internet outrage, a German hunter has killed what is believed to be the largest elephant ever killed in Africa “for sport” in almost 30 years, according to The Telegraph. While Walter Palmer, the hunter who killed Cecil paid $50,000 for his trophy hunt, this man, who has not been identified by name, paid $60,000 (nearly £40,000) as part of a “21-day game hunt including the Big Five of elephants, leopards, lions, buffalo and rhinoceros,” reports The Telegraph.

“Let’s have some ethics,” he added. “Just because they have money, they don’t need to do it. It’s only so they can mount them on a bloody wall. What is that?”

Elephants are being killed—mostly by poachers—at an alarming rate. Exact numbers are hard to come by, but William deBuys at TomDispatch puts the number at 100 elephants killed a day. The critically acclaimed series Earth Focus estimates an elephant is killed every 20 minutes for its tusks.

Cyanide poisoning of elephants has become a major problem in the last two years. In 2013, up to 100 elephants were killed with cyanide (original estimates put the number at 300). Zimbabwe National Parks has called for “stiffer penalties for poachers” after a slew of elephant killings from cyanide poisoning in the last two weeks—26 elephants found dead this week and 14 found dead last week, according to The Telegraph.