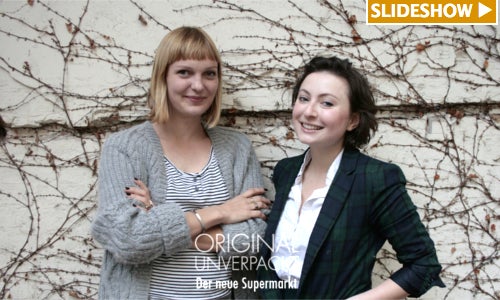 Germany has plenty to teach other countries about renewable energy, and now about waste-free supermarkets, too.

With funding secure and set, two entrepreneurs from Berlin will soon open a supermarket that will not use disposable packaging. Instead, shoppers will be encouraged to bring their own bags and containers to Original Unvertpackt, which translates to Original Unpacked.

“No disposable cups, no welded vegetables, no plastic bags in cardboard boxes and no tetra packs,” owners Sara Wolf and Milena Glimbovski wrote on their Social Impact Finance page. This video, created by the owners, but translated by the Epoch Times, further explains the concept.

Simply put, the women say they want to “change shopping forever.” They estimate that 15 million tons of packaging are thrown away every year in their country.

Wolf and Glimbovski honed their idea in the Social Impact Lab, which offers co-working spaces and platforms for socially responsible entrepreneurs in Germany.

As the Epoch Times points out, the package-free supermarket concept has been attempted before. A store called Unpackaged lasted just one year before closing in 2013. Wolf and Glimbovski are confident they can sustain success.

“Small ideas change the world, but only if you let them grow also,” the owners wrote. “We have made it our goal to change, together with you, shopping. Specifically, this means that in the future maybe even you can build in your city the nearest store with our support. But until then we will be a lot of work, passion and yes, even a bit of money to put into the implementation of a really, really great concept.”