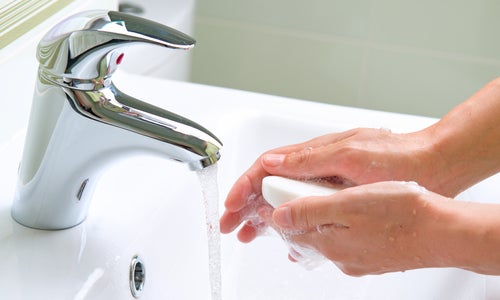 Half of newborns in a Brooklyn-based study were exposed in the womb to triclosan, a germ-killing chemical widely used in consumer products, researchers reported Sunday at an annual meeting of chemists.

“Our study suggests that expectant mothers may be highly exposed to these compounds, which have endocrine-disrupting capabilities,” said study coauthor Laura Geer, an environmental health scientist at SUNY-Downstate Medical Center in New York. 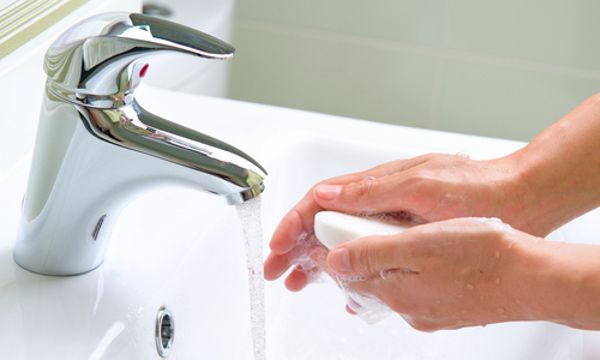 Triclocarban is found in some bar soaps. Photo courtesy of Shutterstock

In addition to triclosan, about one-quarter of the newborns were exposed to traces of triclocarban, another germ-killing chemical in some bar soaps.

The researchers also reported that pregnant women with higher levels of butylparaben, a cosmetics germ-killing preservative, gave birth to shorter babies than women with lower levels. It’s not clear what health effects, if any, the shorter lengths would have on a child, Geer said. Those findings are preliminary and have not yet been published, so Geer declined to reveal details on the length differences.

“Shifts in birth size may be an indication of endocrine disruption,” she said. “We hope to address the question of adverse health outcomes associated with these chemicals in future research.”

The findings are being presented at the American Chemical Society’s annual meeting in San Francisco. They add to growing debate about the safety of antimicrobial chemicals in consumer products. Triclosan and triclocarban are used in more than 2,000 items, including some toothpastes, liquid soaps, detergents, clothing and toys.

Last year, the U.S. Food and Drug Administration (FDA) announced that antibiotic hand soaps and body washes containing the two chemicals were no more effective than regular soap and water. The FDA is reviewing their safety and possible health effects, with a ruling expected in 2016. Earlier this year, Minnesota became the first state to ban triclosan in some household products.

Studies have reported that triclosan and triclocarban may add to the spread of antibiotic-resistant bacteria, disrupt development of the brain and reproductive system and accumulate in plants and animals. Parabens, identified as estrogen mimics, have been linked to reproductive problems in lab animals, as well as allergies and skin irritation.

In the Brooklyn study, all of the 184 pregnant women tested had traces of triclosan in their urine, while 86 percent had triclocarban, according to the study by Geer and Arizona State University researchers. Umbilical cord blood from 33 of the women was tested. It was the first time triclocarban had been studied in pregnant women and fetuses.

The women had higher levels of the chemicals, on average, than the general U.S. population. Most of the women tested were black.

“If you cut off the source of exposure, eventually triclosan and triclocarban would quickly be diluted out, but the truth is that we have universal use of these chemicals, and therefore also universal exposure,” Rolf Halden, the study’s lead investigator and director of Arizona State’s Center for Environmental Security, said in a statement.

Paul DeLeo, an associate vice president of the American Cleaning Institute, which represents the U.S. cleaning products industry, said the traces found are too small to have any effect.

“Everything around us gets into us. But the levels they are finding are extremely small. There’s a wide margin of safety between these levels and the levels deemed unsafe based on standard toxicology testing,” he said.

However, experts say that standard toxicological tests do not detect many effects, especially ones related to hormone disruption.

Geer said pregnant women who want to reduce their exposures should scan the active ingredients listed on the back of products. “Avoid products labeled ‘antimicrobial,’ since these products likely contain triclosan or triclocarban as active ingredients,” she said.

Big-name manufacturers Proctor & Gamble and Johnson & Johnson have announced they are phasing out triclosan from their products. Many cosmetics companies market paraben-free products.