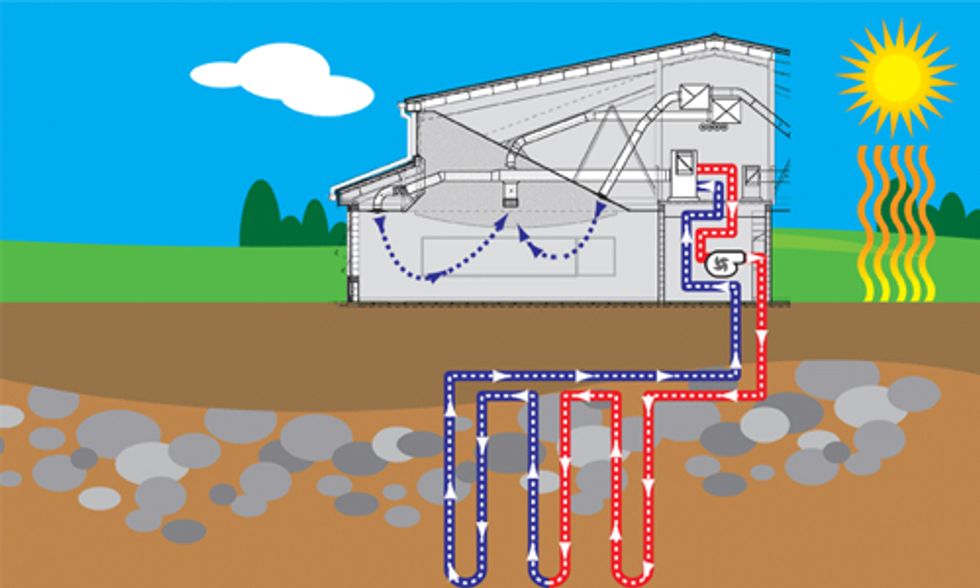 In 2013, world geothermal electricity-generating capacity grew 3 percent to top 11,700 megawatts across 24 countries. Although some other renewable energy technologies are seeing much faster growth—wind power has expanded 21 percent per year since 2008, for example, while solar power has grown at a blistering 53 percent annual rate—this was geothermal’s best year since the 2007-08 financial crisis.

Geothermal power’s relatively slower growth is not due to a paucity of energy to tap. On the contrary, the upper six miles of the Earth’s crust holds 50,000 times the energy embodied in the world’s oil and gas reserves. But unlike the relative ease of measuring wind speed and solar radiation, test-drilling to assess deep heat resources prior to building a geothermal power plant is uncertain and costly. The developer may spend 15 percent of the project's capital cost during test-drilling, with no guarantee of finding a viable site.

Once built, however, a geothermal power plant can generate electricity 24 hours a day with low operation and maintenance costs—importantly because there is zero fuel cost. Over the life of the generator, geothermal plants are often cost-competitive with all other power sources, including fossil fuel and nuclear plants. This is true even without considering the many indirect costs of fossil- and nuclear-generated electricity that are not reflected in customers’ monthly bills.

The top three countries in installed geothermal power capacity—the U.S., Philippines and Indonesia—account for more than half the world total. California hosts nearly 80 percent of the 3,440 megawatts of U.S. geothermal capacity; another 16 percent is found in Nevada.

Indonesia has the most ambitious geothermal capacity target. It is looking to develop 10,000 megawatts by 2025. Having only gained 150 megawatts in the last four years, this will be a steep climb. But a new law passed by the government in late August 2014 should help move industry activity in that direction: it increases the per-kilowatt-hour purchase price guaranteed to geothermal producers and ends geothermal power’s classification as mining activity. (Much of Indonesia’s untapped geothermal resource lies in forested areas where mining is illegal.) Even before the new law took effect, geothermal company Ormat began construction on the world’s largest single geothermal power plant, a 330-megawatt project in North Sumatra, in June 2014. The plant should generate its first electricity in 2018.

Indonesia is just one of about 40 countries that could get all their electricity from indigenous geothermal power—a list that includes Ecuador, Ethiopia, Iceland, Kenya, Papua New Guinea, Peru, the Philippines and Tanzania. Nearly all of them are developing countries, where the high up-front costs of geothermal development are often prohibitive.

To help address this mismatch of geothermal resources and funds, the World Bank launched its Global Geothermal Development Plan in March 2013. By December, donors had come up with $115 million of the initial $500 million target to identify and fund test-drilling for promising geothermal projects in the developing world. The World Bank hopes that the experience gained from these projects will lead to lower costs for the geothermal industry overall. This would be good news on many fronts—simultaneously reducing energy poverty, air pollution, carbon emissions and costly fossil fuel imports.