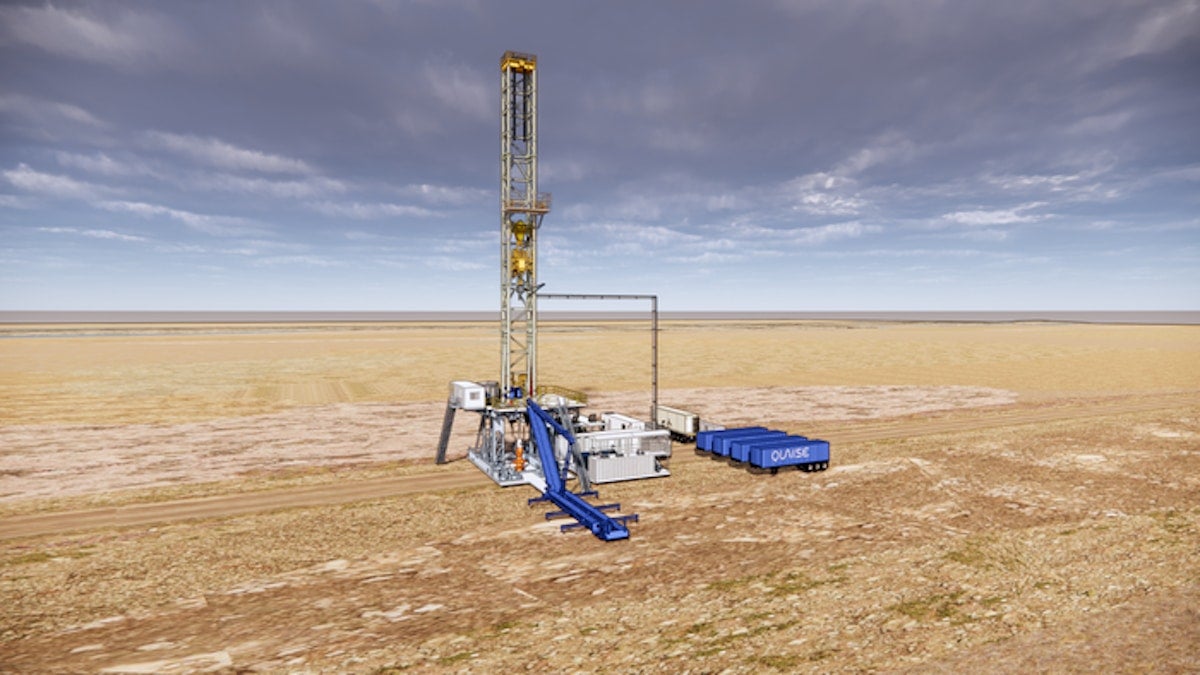 Artist's rendition of the Quaise drilling rig being developed to access the geothermal heat miles below the Earth. Hector Vargas / Quaise Energy

Usually when we think of drilling beneath the Earth’s surface for energy, we think of fossil fuels. But U.S.-based company Quaise Energy is working on a way to drill, baby, drill that would actually harness renewable energy.

The company is developing the technology to drill 10 miles beneath the Earth to access the geothermal energy stored there.

“The total energy content of the heat stored underground exceeds our annual energy demand as a planet by a factor of a billion,” Quaise Energy co-founder and project manager Matt Houde said at a talk at the TEDx Boston Planetary Stewardship Event November 13 and 14, as Science Communications reported. “So tapping into a fraction of that is more than enough to meet our energy needs for the foreseeable future.”

Geothermal energy refers to the energy stored as heat beneath the Earth’s crust, as National Geographic explained. The Earth gets hotter the closer it gets to its core, where it is heated both by the memory of the friction and gravitational pull of Earth’s creation and the ongoing decay of radioactive isotopes. Sometimes, this heat escapes naturally to the surface through features like geysers, hot springs or steam vents. Iceland has so much heated subterranean water that it is able to get 66 percent of its primary energy from geothermal sources, according to its National Energy Authority.

Most of the world, however, has to dig a little deeper, which is where Quaise Energy comes in. The sweet spot is getting to 20 kilometers (approximately 12 miles) where temperatures are around 500 degrees Celsius — hot enough to repower fossil fuel plants and hasten the energy transition.

“At these depths, we can reach geothermal anywhere on Earth, making it a truly global energy source. It provides a path to energy independence for every nation,” the company says on its website.

Up until now, the deepest hole on record was the Kola borehole in the Arctic Circle, which goes down 12.2 kilometers (approximately 7.6 miles), according to The Independent. This endeavor took the Soviet Union more than 20 years.

“[T]he truth is, we’ll need hundreds if not thousands of Kola boreholes if we want to scale geothermal to the capacity that’s needed,” Houde said at TEDx Boston, as Science Communications reported.

To make this happen, Quaise Energy is building on technology developed by MIT scientists over the last 15 years to use millimeter waves — similar to microwaves — to first melt then vaporize rock, according to Electrek. Scientists have used this method to drill through basalt. Quaise’s plan is to use conventional drilling technology developed by the fossil fuel industry to get through the surface rock and then switch to the millimeter waves for so-called basement rock.

One advantage of this particular renewable technology is that it offers a built-in just transition for skilled oil and gas workers. Houde called it “the perfect energy source to take advantage of the largest workforce in the world, the oil and gas industry,” which currently boasts 11 million U.S. jobs.

Quaise Energy is not yet ready to drill. The company needs to learn more about how deeper rocks behave and scale up production of the millimeter wave producing gyrotrons as well as figure out how to remove the ash that builds up during the drilling process. So far, it has raised more than $63 million to develop its idea, according to The Independent.

“Our current plan is to drill the first holes in the field in the next few years,” Houde said at TEDx Boston, as Science Communications reported. “And while we continue to advance the technology to drill deeper, we will also explore our first commercial geothermal projects in shallower settings.”