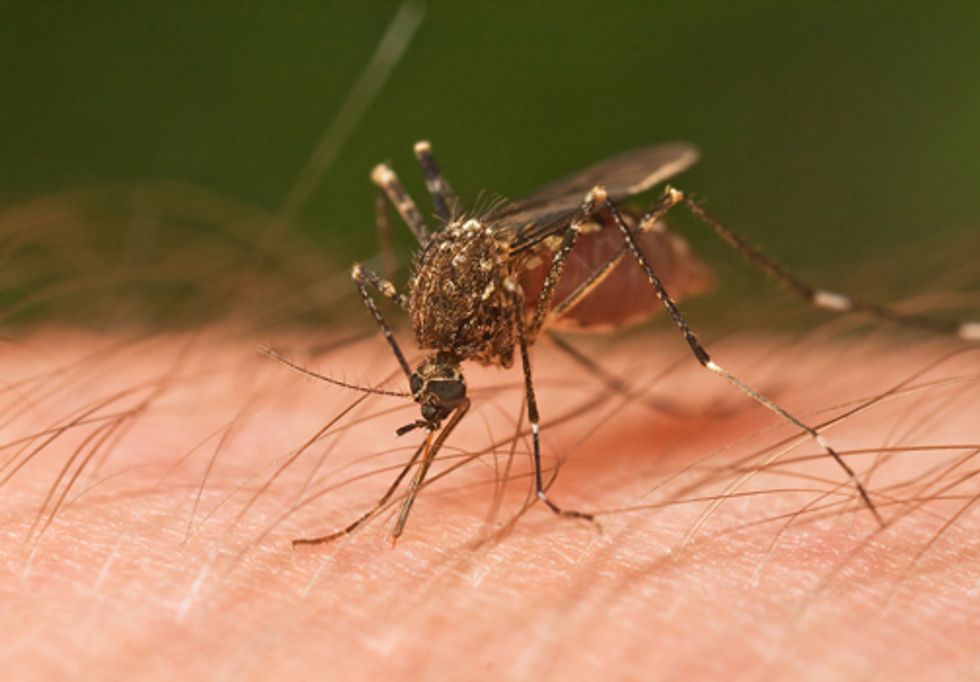 A confidential internal document obtained by civil society groups shows genetically modified (GM) mosquitoes described by their manufacturer, United Kingdom (UK) company Oxitec, as “sterile” are in fact not sterile and their offspring have a 15 percent survival rate in the presence of the common antibiotic tetracycline.

In the study described in this document, the genetically modified mosquitoes were fed cat food containing chicken contaminated with low levels of tetracycline, and many of the mosquitoes were able to reproduce, with their offspring surviving to adulthood1.

A redacted version of the document, released to GeneWatch UK under freedom of information laws, shows that the company tried to hide the evidence that its technology will fail to prevent reproduction in the presence of low levels of tetracycline contamination2.

Oxitec’s technology aims to prevent the progeny of GM mosquitoes from surviving in the wild. The fact that it fails in the presence of low levels of tetracycline is cause for concern, the groups said, raising the spectre of genetically modified mosquitoes surviving and breeding, producing adult populations of GM mosquitoes, including GM females which can bite and transmit disease.

The antibiotic tetracycline is widely used in agriculture and is present in sewage as well as in industrially farmed meat. Mosquitoes that carry dengue fever are known to breed in environments contaminated with sewage where they are likely to encounter widespread tetracycline contamination3.

Failure of the technology in the presence of tetracycline contamination could lead to a rebound in cases of disease and biting GM females might cause unknown impacts on human health, such as allergies. The ecological implications of GM mosquitoes surviving and breeding are also unknown.

Even in the absence of tetracycline contamination, the GM mosquitoes are known to survive in the laboratory at rates of around 3 percent. In the field, this would translate into large numbers of survivors, given that continual releases of millions of GM mosquitoes would be needed to sustain the goals of population suppression.

“The fact that Oxitec is hiding data from the public has undermined its credibility," said Eric Hoffman, of Friends of the Earth U.S. "Oxitec’s assertions cannot be trusted. Trials of its mosquitoes must not move forward in the absence of comprehensive and impartial reviews of the environmental, human health and ethical risks. Such trials must also await the establishment of a clear and well designed regulatory framework, which does not yet exist.”

“It is impossible to assess health or environmental risks if important information is concealed from public scrutiny," said Helen Wallace, director of GeneWatch UK. "This confidential document reveals a fundamental flaw in Oxitec’s technology which should have halted their experiments. Oxitec’s commercial interests are in conflict with the need for careful scientific scrutiny and honest and transparent public information.”

“The information in this document totally undermines the risk assessment for the field releases that have been carried out to date," said Lim Li Ching, of Third World Network. "People have been seriously misled about the risks to health and the environment. Were our regulators fully aware about this fundamental problem with Oxitec’s technology?”

Lucia Ortiz of Friends of the Earth Brazil said: “Oxitec is using poor regions in the Global South, such as cities in the Northeast region of Brazil, as its laboratory for genetically modified mosquitoes. This is despite the fact that Oxitec has not proven its mosquitoes are safe for people or the environment nor has it been open and honest with the local communities about the possible risks its technology poses. This news only highlights the need for all the company’s data on its mosquitoes to be made public so people and local governments can make informed decisions as to whether or not they want GM mosquitoes in their communities. Oxitec is just another example of corporations trying to make a profit out of a public health, climate and environmental crisis while capturing the same local governments that should instead be working with communities to develop a real solution. In light of this news, Oxitec’s current trial in Brazil should come to a halt until the impacted communities have had time to properly review the real risks posed by GM mosquitoes.”

Oxitec has released genetically modified mosquitoes in field experiments in the Cayman Islands, Malaysia and Brazil, and is planning a release this year in the Florida Keys.

The GM mosquitoes are intended to reduce the wild population by mating with naturally occurring mosquitoes and producing progeny which don’t survive, thus reducing the population and therefore the transmission of the tropical disease dengue fever. The company has been widely criticised for putting its commercial interests ahead of public and environmental safety4. Its first releases of GM mosquitoes took place controversially in the Cayman Islands, where there is no biosafety law or regulation. Oxitec staff have been closely involved in developing risk assessment guidelines for GM insects worldwide, leading to concerns about lack of independent scrutiny and conflict of interest.

Other countries where releases of Oxitec’s GM mosquitoes have been proposed include Panama, India, Singapore, Thailand, Vietnam, the Philippines, Costa Rica and Trinidad & Tobago. The company has also proposed releasing GM diamond-back moths using the same technology in Britain, with the aim of reducing the impact of these pests on cabbage crops.

The findings revealed in the document seriously call into question any use of Oxitec’s patented RIDL (Release of Insects carrying a Dominant Lethal) technology, which depends on the use of tetracycline as a chemical switch to allow breeding of GM insects in the lab.

1. The Oxitec document “Eliminating Tetracycline Contamination” is available by clicking here. At the end of page 2 it states: "Tetracycline is very efficient at binding to the tTAV and switching off the enhancement effect. Therefore, even small amounts of tetracycline can repress the RIDL system.

This was highlighted by a difference in results seen between our laboratory and a collaborator. They were getting 15 percent survival of a transgenic line and we were getting 3 percent. After a lot of testing and comparing experimental design it was found that they used a cat food to feed the larvae and this cat food contained chicken. It is known that tetracycline is routinely used to prevent infections in chickens, especially in the cheap, mass produced, chicken used for animal food. The chicken is heat treated before being used, but this does not remove all of the tetracycline. This meant that a small amount of tetracycline was being added from the food to the larvae and repressing the lethal system."

2. The redacted version of the document is available by clicking here. It is one of the documents included in a package sent to importing countries by Oxitec under international rules which apply to the transboundary movement of GMOs for open release into the environment. Parts of the document that were blacked out before release to GeneWatch UK and to the UK Parliament include the 15 percent survival rate.