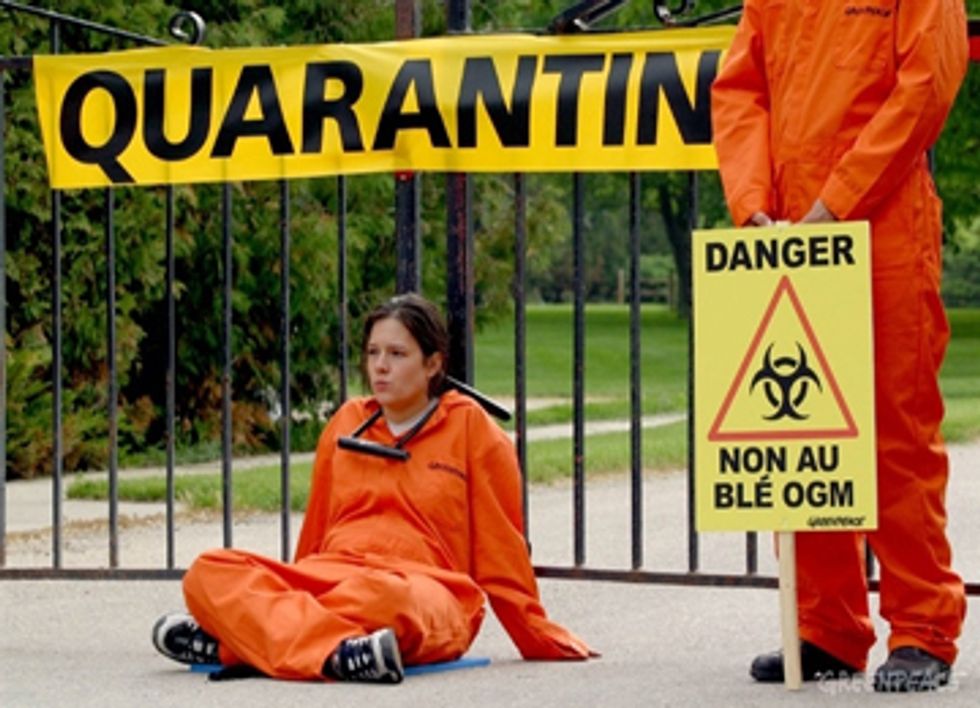 By Janet Cotter and Eric Darier

Shockwaves are being felt across the world's wheat markets following the first-ever discovery of unauthorized genetically engineered (GE) wheat growing on a U.S. farm—a development that gives further proof that GE crops cannot be controlled.

The discovery of Monsanto's GE wheat, confirmed by U.S. authorities, sparked alarm among Washington D.C.'s trading nations, pushed wheat prices lower and is threatening U.S. exports. It should not be seen, however, as totally unexpected.

The GE wheat is a herbicide tolerant wheat (probably MON 71800) that Monsanto tested in fields across 16 states between 1998 and 2005. The wheat was never authorized and never commercialized because Monsanto withdrew its application in May 2004 following massive global opposition from farmers, consumers and environmentalists.

So what happened between the last field tests in 2005 and the announcement of a contamination in Oregon eight years later? How did it get there? Who is responsible? Who will pay for the decontamination? Is the contamination limited to one farmer’s field in Oregon or is it only the tip of the iceberg of a wider problem? Will Canada, where the GE wheat was also tested, be affected by the contamination?

An activist helps quarantine a government-run farm in Canada to expose the risks of Monsanto's genetically engineered wheat.

About 90 percent of Oregon wheat production is exported mainly to Asian countries. This contamination will hit commodity trade as more Asian governments start testing for GE contamination and require guarantees from the U.S. (and possibly from Canada) that wheat imports are not contaminated with this GE wheat. According to figures from the U.S. Wheat Associates, out of the 11.4 million tons of wheat exported by Oregon, 50 percent is sold to East Asia (China, Japan and South Korea), 28 percent to South East Asia, nine percent to Latin America and nine percent to the Middle East.

U.S. authorities claim that this GE wheat is "safe" based on what Monsanto told them; that “this wheat variety is not materially different in composition, safety or any other relevant parameter from wheat now grown, marketed and consumed." But why should they trust Monsanto, which has great commercial interests at stake, to provide rigorous and impartial scientific data on its own product? It looks like a case of the fox guarding the hen house.

The developers of GE wheat and government authorities have repeatedly said that GE wheat will not contaminate conventional or organic wheat because it is predominantly self-pollinating—the pollen does not spread very far, unlike cross-pollinating crops such as maize and oilseed rape.

Despite this, contamination from GE wheat has happened. Like other GE contamination, the route of contamination isn’t clear. For example, Bayer said the massive contamination of U.S. rice in 2006 with an unapproved, experimental variety of rice called LL601 was an “act of God.”

Early this year the European Environmental Agency (EAA) published a report, Late lessons from Early Warnings: Science, Precaution, Innovation, that documented "how damaging and costly the misuse or neglect of the precautionary principle can be." The EEA reviewed extensively the problems with GE crops as obstacles to and a distraction from ecological farming solutions.

The Monsanto GE wheat contamination shows again that governments and industry measures to prevent contamination are failing. The only permanent solution is to immediately ban the field testing of GE crops.

More fundamentally, the world urgently needs to switch to ecological farming and get out of the chemical heavy, GE industrial agriculture treadmill and the environmental risks it represents.