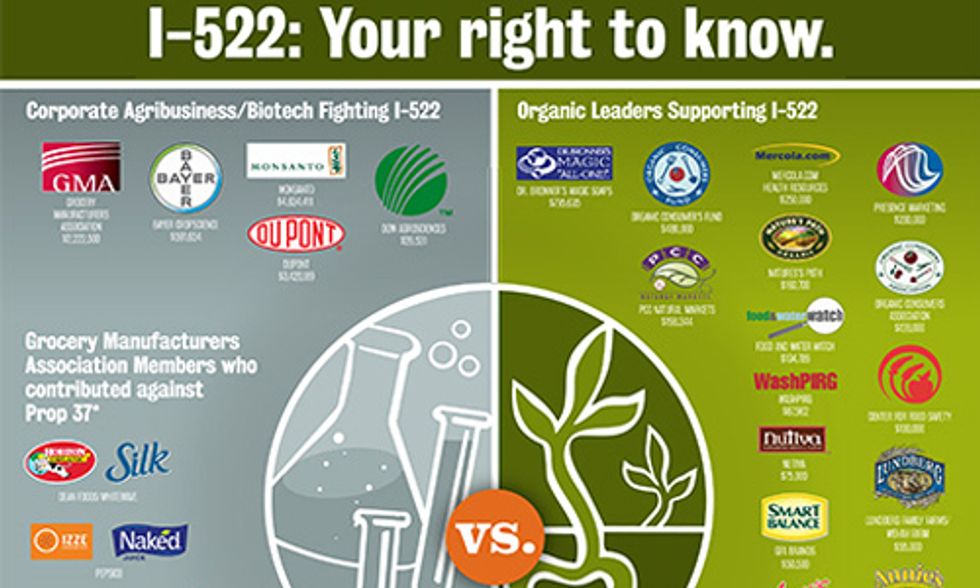 A group fighting the Nov. 5  ballot measure that would mandate labeling of genetically engineered (GE) foods in Washington has broken the record for the most money raised by an initiative campaign in that state.

With a $540,000 donation from Monsanto on Monday, the No on 522 Committee has raised nearly $22.9 million to defeat I-522, a citizens' initiative that would require foods containing GE ingredients to carry a label, according to campaign records.

The No on 522 committee is largely financed by five biotechnology giants and a food industry group. About half of the money came from the large food processing companies that were donating anonymously through the Grocery Manufacturers Association until a lawsuit by the state attorney general forced the lobby group to release their names.

Biotech and agrichemical firms including Monsanto, Bayer CropScience and Dupont are largely responsible for the rest of the war chest. Monsanto, the second-highest contributor, has donated $5.37 million. The No on 522 campaign has spent $13.5 million, according to state records.

Money appears to be making a big difference. In September, before both sides began spending on TV ads, GE labeling supporters held a 45-point lead, according to an Elway Poll. Just weeks after ads began to roll out across the state, an Oct. 21 poll showed that just 46 percent of voters supported the initiative and 42 percent were opposed.

Yes on 522, the campaign for GE labeling, has already been outspent by the opposition, with $6.8 million raised and $5.4 million spent. The campaign has received large chunks of its funding from natural products companies, organics firms and alternative health companies. The biggest supporter of I-522 is Dr. Bronner's Magic Soaps of Escondido, CA, which has contributed $950,000. Other supporters include, Nutiva, Nature’s Path, Clif Bar, Organic Valley, Brad's Raw Foods, and Mercola.com.

Supporters of the labeling initiative in Washington state fear a reprise of a similar measure in California in 2012, where Monsanto contributed $8.1 million to a successful effort to defeat California’s Proposition 37. Monsanto was the No on 37 campaign’s biggest contributor.

Immediate donations are needed to fight back against the Monsanto corporate cash, said Delana Jones, campaign manager for Yes on 522.

Listen to what Dr. Michael Hansen, senior scientist for Consumers Union, has to say about the GE food labeling initiative: