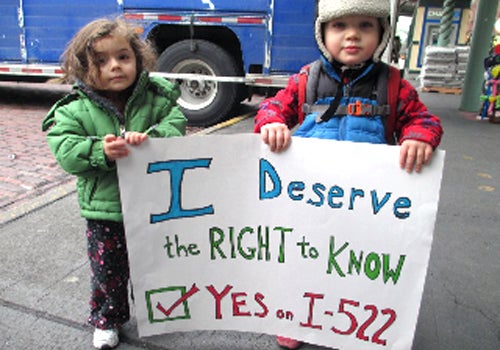 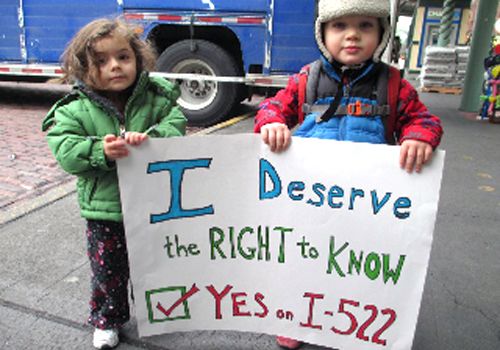 Kids in Seattle support I-522 to make GE food labels the law.

According to Alison Auciello, an Ohio organizer with Food & Water Watch, there’s been a flurry of activity in the Ohio “Let Me Decide” campaign. From Cleveland to Granville to Cincinnati, Ohioans are pushing for nationwide labeling of GE foods.

On Feb. 15, we met with Cleveland City Council members Joseph Cimperman and Matt Zone, asking them to sponsor a resolution to pressure the Food and Drug Administration, U.S. Environmental Protection Agency, U.S. Department of Agriculture and federal legislators to mandate labeling of GE foods. Cimperman and Zone are excited to be working with us and are committed to bringing the resolution before the Cleveland City Council. Should Cleveland pass the resolution, they will become the second city in Ohio to call for GE labeling, following the lead of Cincinnati, which unanimously passed the resolution last November. We will continue our efforts to pass similar resolutions in Ohio and call on Senator Sherrod Brown (D-OH) to work toward national legislation for GE labeling.

On Feb. 16 and Feb. 17, we attended the 34th annual Ohio Ecological Food & Farm Association (OEFFA) conference—Ohio’s largest on sustainable food and farming conference. We were invited to present a workshop on the campaign to label genetically engineered foods in collaboration with Ariel Miller, an activist working with OEFFA to organize support for a national mandate to label GE food. Our presentation included an overview of genetically engineered foods, the health and environmental impacts of GE foods, myths perpetuated by biotech companies like Monsanto and the campaign to label GE food.

Judging from the questions Ariel and I got, the farmers and good food advocates are not only supportive of GE labeling, they want to make sure their farms aren’t contaminated with genetic material from neighboring farms. Contamination is a big concern for farmers here in Ohio and across the country, who fear Monsanto could potentially bring lawsuits against them for the possession of their patented genetic material. OEFFA has joined in the lawsuit to protect farmers against this type of intimidation from Big Agribusiness.

Throughout the conference, workshop speakers tied in their own issues to the problems presented by GE foods to the work they are doing—from sustainable farming practices to bringing whole, healthy foods from farm to plate. Farmers, advocates and consumers alike vowed to keep GE foods off their farms, out of their businesses and off their plates. A Food & Water Watch partner on food issues and fracking, Mo Tressler from All Things Food in Bryan, OH, stressed in her workshop how important the connection is between the farmer and the consumer. From her perspective, not only should we know what’s in our food, we should know and support our local farmers.

Warren Taylor, of Snowville Creamery, calls for nothing short of a revolution to take on the corporate control of our food system and democracy. He says that if we want to change the policies that perpetuate corporate subversion of our democracy, we’ve all got to throw our hat in the ring.

According to Seth Gladstone, eastern region communications manager at Food & Water Watch, of the many busy days at the New Jersey Statehouse in Trenton, Feb. 21 stood out. Legislators and hurried staffers weaved through the crowded hallways from committee hearings to caucus meetings and back. Lobbyists and reporters moved from hushed conversations to new hushed conversations. And activists devoted to causes ranging from gun control to education reform to Lou Gehrig’s Disease gathered in meeting rooms and offices to press their cases with lawmakers.

But perhaps the broadest and most diverse group of activists at the statehouse that day were gathered for a single, united cause: the launch of a statewide campaign seeking legislation requiring the labeling of GE foods in New Jersey. Along with Food & Water Watch, a mix of activists and advocates from environmental, labor, health, student, farming, faith and business organizations were joined to tell legislators and the press, “Let me decide” when it comes to GE foods.

“Over the years, consumers have fought for labeling of calorie counts, fat content and ingredients lists so they can make smarter, healthier choices for their families,” said Jim Walsh, Food & Water Watch’s eastern region director. “But as food production technology evolves, so should our food labeling. Consumers have a right to know which products on market shelves contain genetically engineered ingredients. In short, let us decide.”

Amanda Nesheiwat, a student leader with NJ Sustainable Collegiate Partners, echoed Jim’s sentiment. “Just as we label food with allergy warnings, we should label GE foods. The health risks tied to GE foods are reason enough not to give corporations the power to dictate the decisions that consumers should be able to make on their own,” said Nesheiwat.

Joining the activists at the statehouse were two state legislators representing two different political parties, both pledging their commitment to do all they could among their peers to move GE labeling legislation in the coming weeks and months. Assembly Members David Wolfe (R) and Linda Stender (D) both spoke passionately about their own personal motivations—family health, constituency health and community health—for working hard to make a GE labeling law a reality in New Jersey.

On a busy day at the statehouse, optimism ran strong that New Jersey might become the first state in the union to label genetically engineered foods. The campaign marches on.

According to Nisha Swinton, an organizer for Food & Water Watch, supporters of the Right to Know GMO CT coalition united at the Legislative Office Building on Feb. 8 to ask the Connecticut General Assembly a candid question: Are you standing up for consumers’ rights to know whether or not the food they eat and feed their families with has been genetically engineered?

Food & Water Watch is excited to support the great work and grassroots power that GMO-free CT has initiated to pass groundbreaking legislation to label genetically engineered foods in Connecticut. The growing Connecticut coalition includes GMO-Free CT, Northeast Organic Farming Association CT, Sierra Club, Food & Water Watch and many others—more than 100 local, state and national organizations who are committed to ensuring Connecticut consumers know whether their foods are genetically engineered. Over the past few weeks alone, 109 businesses and organizations across the state have joined the coalition, 180 residents have attended campaign action meetings and grassroots leaders have scheduled more than 20 educational events around the state.

The vast majority of processed foods contain GE ingredients, which are largely untested, unlabeled and potentially unsafe. Unfortunately, far too many American consumers remain clueless about whether or not their food is genetically engineered, but Connecticut residents are sharp, informed, driven and refuse to sit back in silence when it comes to demanding that GE food be labeled. Perhaps the most critical action we can take right now towards creating and sustaining an honest food system is to label GE foods. Once these foods are labeled, all consumers—regardless of where their live or how much money they make—become empowered with the knowledge to choose safety over processed chemicals.

“As someone who has lived in the Hartford area all of my life and worked as a reporter for several of the state’s newspapers, I am keenly aware of the sophistication and intelligence among Connecticut residents. I have faith that business owners, residents and coalition allies will not stop fighting until they know for certain that GE food labeling will become a way of life,” says Joanna Smiley, Food & Water Watch public relations volunteer.

Rep. Phil Miller (D-Essex) and Diana Urban (D- North Stonington), in separate committees, introduced a bill to label GE foods, which is currently in the revisor’s office. Next steps and the exact time frame is still to be determined, but we will keep building public support and awareness for the bill.

Our field campaign is off to a great start. With our allies including Label It Washington and Seattle Tilth, we are laying the groundwork for victory. We hosted five days of action throughout the state collecting photo petitions from locations like the iconic Pike Place Market, University of Washington Vancouver and the Main Market Coop in Spokane. GE food labeling volunteers are having fun as they build this historic campaign in Washington.

On Jan. 31, Washington Secretary of State Kim Wyman certified the signatures that will ensure that I-522—The Peoples right to know Genetically Engineered Food Act—will either be voted into law by the legislature or go to the ballot for public vote this November. On Feb. 14, the state legislature held a public hearing on the initiative, which was well attended with supporters of the initiative. From the hearing, it seems most likely that the legislature will choose to let the initiative go to a popular vote.