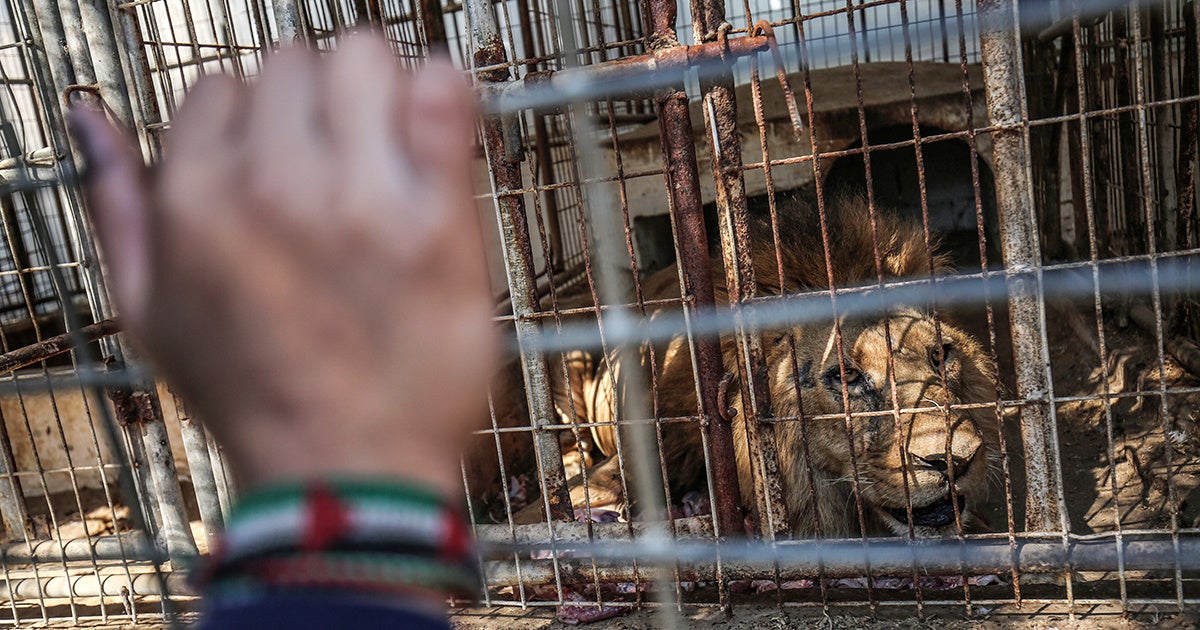 Children look at a lion kept at the Rafah Zoo in Gaza in February. SAID KHATIB / AFP / Getty Images

Nearly fifty animals were rescued from a zoo in Gaza Sunday where animals had died from exposure and starvation, Reuters reported.

The animals, including five lions, five monkeys, four ostriches, three peacocks, two wolves and a hyena, were moved from a zoo in Rafah, Gaza to Jordan Sunday by the animal welfare charity Four Paws. The group said it was its largest rescue mission to-date. Most of the 47 animals will stay in animal sanctuaries in Jordan, while two of the lions were flown to South Africa Monday.

“The intensive work of the last weeks has brought our team to its limits. To examine and load almost 50 animals in just a few days was a huge challenge,” Four Paws veterinarian and Head of Mission Amir Khalil said. “Thanks to the cooperation of all authorities, it was possible for us to bring the animals safely out of Gaza. From Israel to Palestine and Jordan, it was impressive to see how these three nations worked together for the animals from Rafah.”

#SaveGazaAnimals: The rescue of 40 animals from Rafah zoo was successful. The next step is to enable a brighter future for these animals. pic.twitter.com/nR3A5x93FU

The Rafah Zoo came under international scrutiny at the beginning of 2019 when four lions cubs froze to death because of harsh weather and inadequate housing, Four Paws said. Also in 2019, the zoo’s owner declawed a female lioness so that visitors could play with her. A petition circulated by Four Paws to close the zoo gained more than 150,000 signatures. Khalil told Reuters that the cages were too small for the animals and their children.

Zoo owner Fathy Jomaa blamed Israel and Egypt’s ongoing blockade of Gaza and the territories’ deteriorating economy for his inability to properly care for the animals. Jomaa ultimately contacted Four Paws about moving them to a new location, BBC News reported.

“It is a tough decision, I feel like I am losing my family. I lived with some of those animals for 20 years,” Jomaa told Reuters. “I hope they find a better place to live.”

The zoo, which opened in 1999, had been the oldest zoo in Gaza, but many animals had been collateral damage in rocket attacks and armed conflict.

#SaveGazaAnimals: YES! The cages are empty!
We have achieved the impossible and managed to get the 47 animals out of Rafah zoo. Now we are ready for the trip to their new home. Thanks to everyone who supported this mission. pic.twitter.com/u8jW5GTL0o

Israel and Egypt have maintained a land, sea and air blockade of Gaza since 2007, after Hamas won parliamentary elections and assumed control of the territory following clashes with rival group Fatah, which controls the West Bank. There are 1.3 million Palestinians living in Gaza, and around 80 percent rely on aid, Time reported.

The more-than-10-year blockade has caused the economy in Gaza to deteriorate so severely that the UN warned it would be uninhabitable by 2020, Voice of America reported in September 2018. At the time of the report, unemployment in the territory is at 27 percent, the highest in the world. Most households only get two hours of electricity a day and only 10 percent of people have access to safe drinking water.

“My children get sick because of the water. They suffer from vomiting, diarrhea. Often, I can tell the water is not clean, but we have no other option,” Gaza resident Madlain Al Najjar told PBS NewsHour in an interview.

In this context, residents were sad to lose the Rafah Zoo.