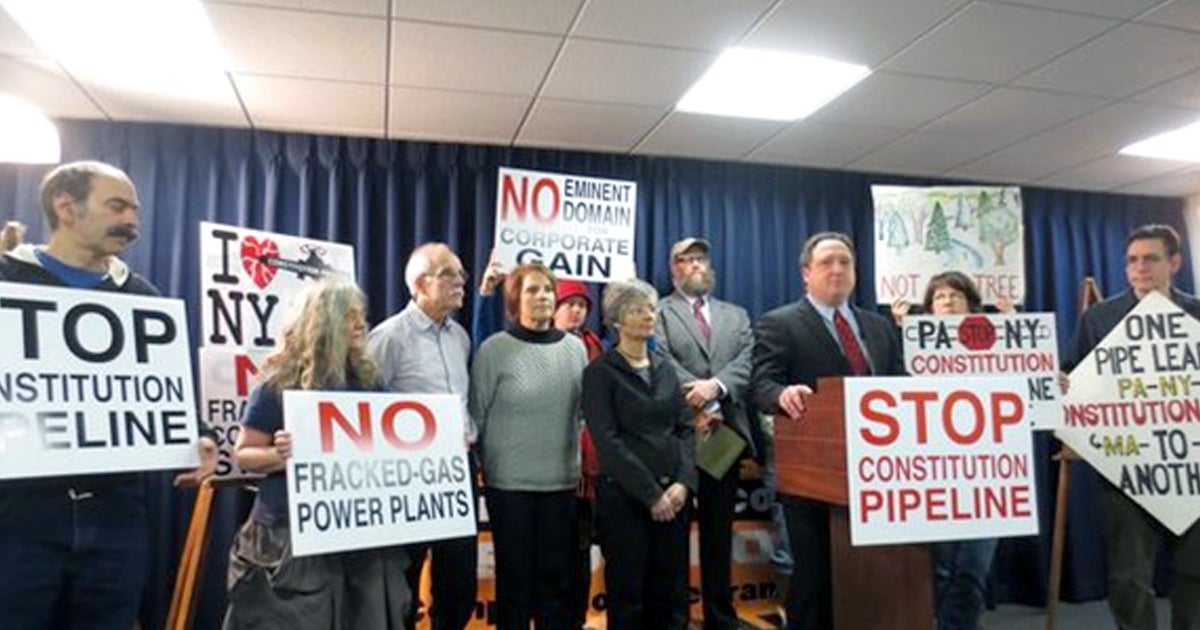 In the past few weeks, the Beyond Dirty Fuels campaign and our partners have helped secure game-changing victories in our work to stop fracked gas pipelines. There are more than 10,000 miles and nearly 100 large, multi-state fracked gas pipelines proposed in the U.S. right now. If these pipelines are constructed, fracking will increase, and our communities and waterways will be irreparably harmed, and climate-disrupting methane pollution will increase at a time when we urgently need to act to stop the worst impacts of climate change. And if the utilities and pipeline companies have their way, consumers will end up footing the bill despite more fracked gas pipelines being unnecessary and unjustified. The good news is that these pipelines are being fought by communities, lawyers, climate activists and many others—and we’re winning. State agencies are responding to overwhelming public pressure and starting to get involved to protect waterways from the impacts of pipelines. The attempt to lock us into another generation of relying on fossil fuels is being met with resistance at every turn.

In the past few weeks, we’ve had great news on multiple fights against fracked gas pipelines, including:

On Aug. 22, the D.C. Circuit Court of Appeals rejected the Federal Energy Regulatory Commission’s (FERC) attempts to downplay the massive climate impacts of the Southeast Market Pipelines Project, including the 515-mile Sabal Trail pipeline that runs through Alabama and Georgia to feed gas plants in Florida. FERC is charged with evaluating whether or not a gas pipeline is needed and is required to ensure a thorough environmental review is done before they decide whether the pipeline should be built at all. In this case, argued by Sierra Club attorney Elly Benson, the court ruled that FERC could not ignore “downstream impacts” of the fracked gas pipeline, meaning greenhouse gas emissions from burning the fracked gas in plants at the end of the pipeline must be accounted for in FERC’s environmental review. Because FERC’s environmental review ignored these climate impacts, the court struck down FERC’s approval of the pipeline. We are already seeing the ripple effects of this victory and expect this decision to have long-ranging impacts as other proposed pipelines must be reviewed for their climate impacts.

You can read more about the Sabal Trail court decision in this blog.

Even though FERC is the lead federal regulator of pipelines, states also have robust regulatory powers. For example, they can protect their waterways during the construction of a pipeline. Under section 401 of the Clean Water Act, pipeline companies need each state to certify that state water quality standards will not be violated before construction can start. In the case of the Constitution pipeline in New York, the company failed to provide the information requested by the NY Department of Environmental Conservation (NY DEC) as it evaluated the water impacts. Consequently, NY DEC denied the certification—which effectively stopped the pipeline from being constructed. Constitution then took New York to court.

In mid-August, the Second Circuit Court of Appeals rejected the Constitution Pipeline Company‘s case against NY DEC, upholding the state’s authority to exercise oversight over water quality permits for major projects. The decision describes in detail DEC’s repeated requests for site-specific information about stream crossings, and the pipeline company’s failure to provide it.

The ruling on Constitution reinforced that regardless of how much money corporate polluters may spend on influence and attorneys, they can never speak louder than the people who want to protect their homes, their communities, and their clean water from dirty and dangerous projects. Affirming the State’s right to reject pipeline projects will have long-lasting impacts and could bolster efforts by other states to defend their water quality standards against pipeline companies.

In another big decision out of New York, NY DEC recently denied a necessary permit to the Valley Lateral project, a fracked gas pipeline slated to go to a new power plant owned by Competitive Power Ventures in Orange County, NY. DEC cited our recent win in the Sabal Trail case, where the court decided thatFERC did not sufficiently consider the climate impacts of these pipelines before approving them. DEC concluded FERC’s environmental review of the Valley Lateral project had similar flaws and was therefore incomplete, prohibiting construction of the project. It’s exciting to see our victory on Sabal Trail already being used to block another fracked gas pipeline!

This denial is particularly important because the Lateral would feed into the Competitive Power Ventures (CPV) power plant that would be fueled by fracked gas from Pennsylvania and emit 7 million tons of carbon-dioxide-equivalent pollution annually. The utility was banking on the approval of the Lateral, and started to construct the plant at its own risk before securing the necessary permits. New York’s denial of one of those permits signals to utilities and pipeline companies the problems and risks with following CPV’s rushed approach.

Late last week, the West Virginia Department of Environmental Protection (WV DEP) announced its intention to reconsider its previously issued water quality certificate for the Mountain Valley Pipeline. DEP’s decision was the result of a legal challenge by the Appalachian Mountain Advocates, representing the Sierra Club and our partners in asserting that WV DEP did not adequately review the potential for the pipeline to harm streams, and came before the state had to defend its issuance of the 401 water quality certification in federal court. The Mountain Valley Pipeline would run about 300 miles from Northwestern West Virginia to Southern Virginia and has faced legal battles that include a coalition of landowners challenging the use of eminent domain. This could mean a significant delay for the MVP while the state goes back to the drawing board to evaluate the water quality impacts, and is another exciting development for advocates defending our water and climate from the impacts of fracked gas pipelines.

All of these significant, precedent-setting steps toward victory in the past few weeks spell trouble for the pipelines. No longer will these projects be seen as foregone conclusions as soon as they’re proposed. Now, the people are being given back the platform they deserve to stand on as we work to protect our communities from the pipeline companies rush to make profits at the expense of our air, water, health and climate.

FERC will have its first meeting in months on Sept. 20. Thus far, the agency has served as nothing more than a rubber stamp for gas projects, and we expect that it will try to rush forward approvals for fracked gas pipelines. But we aren’t going away. Burning more fracked gas spells game over for our planet, which is why the Sierra Club and communities across the country continue to band together to push back and build a powerful movement to challenge dirty fuel infrastructure. Will you join us?

Kelly Martin is the deputy director of the Sierra Club’s Our Wild America campaign.