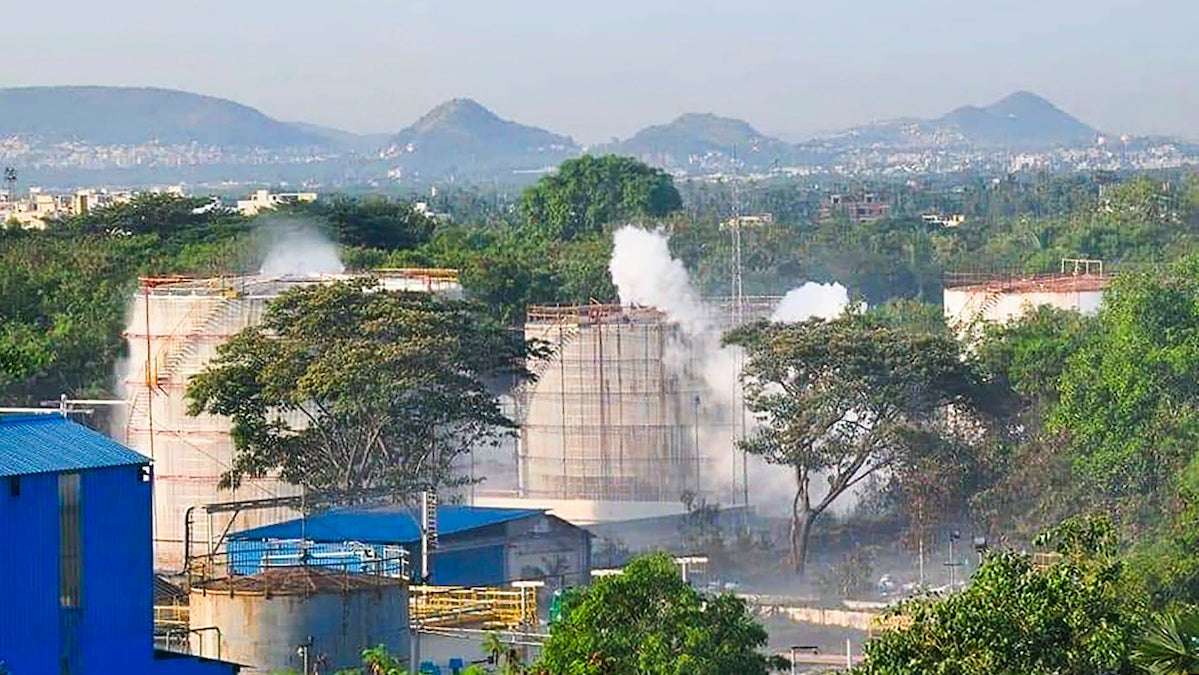 Smoke rises from an LG Polymers plant following a gas leak incident in Visakhapatnam, India on May 7, 2020. AFP via Getty Images

A major gas leak at a petrochemical plant in the eastern, industrial port city of Visakhapatnam, India has killed at least 11 people and sent hundreds to the hospital, according to the most recent figures from India Today.

The leak occurred around 2:30 a.m. Thursday at the LG Polymers chemical plant, when styrene leaked out from two 5,000 tonne (approximately 5,512 U.S. tons) tanks that had been left unattended due to India’s coronavirus lockdown, police said, as The Guardian reported.

“Because of the leakage of the said compound gas hundreds of people have inhaled it and either fell unconscious or having breathing issues,” greater Visakhapatnam municipal corporation commissioner Srijana Gummalla said on Twitter.

Primary report is PVC gas (or Styrene) leaked from LG Polymers, Vepagunta near Gopalapatnam in Visakhapatnam at around 2:30 AM today
Because of the leakage of the said compound gas hundreds of people have inhaled it and either fell unconscious or having breathing issues. pic.twitter.com/WeCdrbddV1

Television footage showed people lying in the streets unconscious and dead cows with white matter leaking from their noses, The Guardian reported.

Swarupa Rani, an assistant commissioner of police in Visakhapatnam, said she was called to the scene around 3:30 a.m.

“One could feel the gas in the air and it was not possible for any of us to stay there for more than a few minutes,” she said.

Visakhapatnam city is on India’s east coast between Kolkata and Chennai, in the state of Andhra Pradesh. Areas within nearly two miles of the plant were at risk, the municipal corporation said, according to Reuters.

The leak was especially dangerous because it occurred while people were still in bed.

“There are people who were sleeping,” district hospitals coordinator B K Naik told AFP. “We are working to get people to the hospital. They need oxygenation and fresh air.”

Naik said at least 1,000 people were hospitalized, while Rani put the number at a lower 300 to 400, according to Reuters. A further 1,500 people were evacuated.

“The gas leak situation is now under control and we are exploring all ways to provide speedy treatment for those who suffer from inhaling the leaked gas. We are investigating the extent of damage and exact cause of the leak and deaths,” LG Chem said in a statement reported by India Today.

The plant makes products from polystyrene, a type of plastic. Those products are used for electric fan blades, cups and cutlery and makeup containers, according to the company website, as Reuters reported. Styrene, the raw material that makes polystyrene, burns easily and releases a toxic gas when it does.

“(The gas) was left there because of the lockdown. It led to a chemical reaction and heat was produced inside the tanks, and the gas leaked because of that,” Rani told AFP.

However, LG Chem said that, while the plant had not been in operation, there was still maintenance staff on hand.

“While it’s true that the factory wasn’t operating as it was under lockdown, there were maintenance workers inside,” a company spokesman told AFP in Seoul. “A worker on night shift discovered the leak and reported it.”

However, environmentalists have long raised concerns about the safety of chemical plants in the area, according to The Guardian.

“The industrial safety culture in this state is very poor and the regulatory bodies are very lax,”EAS Sarma, a former Indian finance secretary who lives nearby, said.

The incident brought back memories of the Bhopal gas leak of 1984, one of the worst industrial disasters of the twentieth century, the Hindustan Times pointed out.

In that tragedy, thousands of people died when 30 tonnes (approximately 33 U.S. tons) of methyl isocyanate gas were released from the Union Carbide pesticide plant. Groundwater was found to still be contaminated by the leak in 2015.