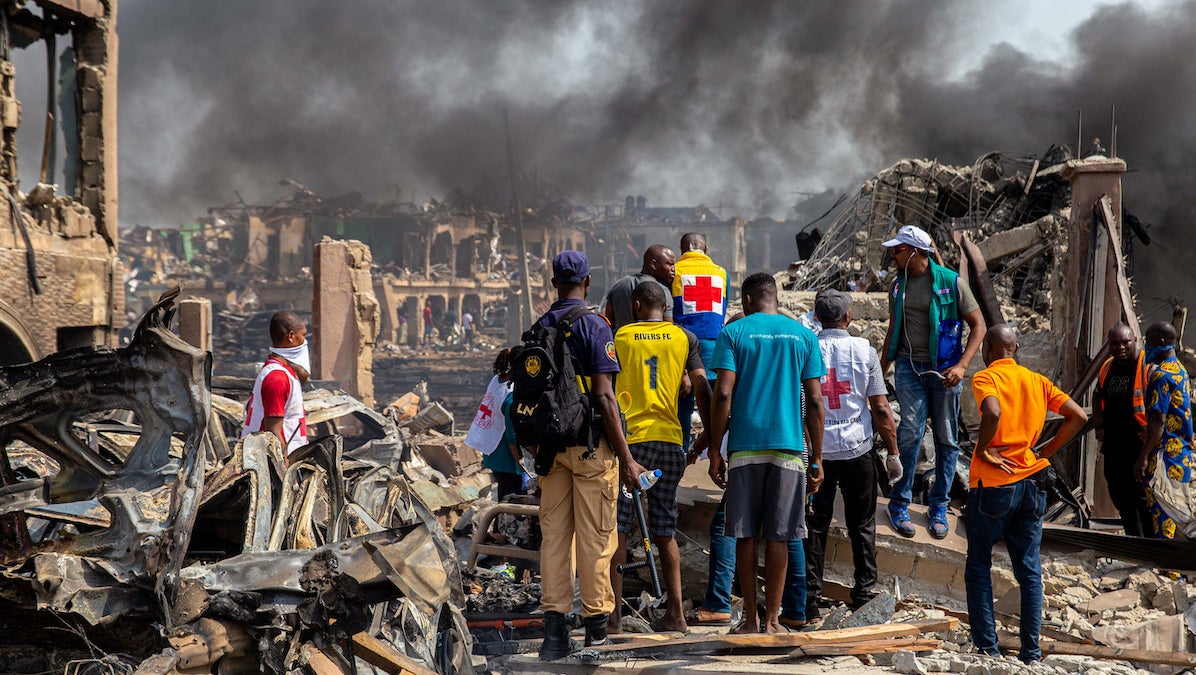 At least 15 people died in a gas explosion in Lagos, Nigeria Sunday morning.

More than 50 buildings were damaged in the blast, National Emergency Management Agency (NEMA) acting coordinator in Lagos Ibrahim Farinloye told reporters, as The Vanguard reported. One of the buildings was the Bethlehem Girls College, and at least 60 injured students were taken to a hospital for treatment.

“The fire started with smoke,” one eyewitness told Reuters. “The smoke was coming up and later we heard a sound … and some houses collapsed even the roofs.”

What you people heard in festac and other parts of Lagos is obviously just the ripple effect.
I fear for the people that love here and the students in that boarding school! It was a pipeline explosion at abule Ado!! God help your children this Sunday morning 💔😭😭 pic.twitter.com/p16st834PJ

The explosion occurred in Abule Ado area of Lagos, but the blast was so loud it could be heard almost all across Lagos state, Pulse TV reported.

It occurred around 9 a.m., and one family of four was killed in the blast returning from church, according to The Vanguard.

The explosion was sparked when a truck hit some gas cylinders at a gas processing plant near a pipeline owned by the Nigerian National Petroleum Corporation (NNPC), the state-owned company told Reuters.

Farinloye then explained to The Vanguard what happened next:

“The resulting fire later spread to the Nigerian National Petroleum Corporation (NNPC) oil pipeline passing through the area even though the pipeline has been shut down as a precautionary measure.

“The fire was eventually extinguished at 3:30 p.m. through the combined efforts of officials of the Lagos State Fire Service, Federal Fire Service, and Nigerian Navy Fire Tender.”

The fire also damaged the pipeline, but NNPC said that the pipeline shutdown would not impact oil delivery to the rest of the state, according to Reuters.

Pipeline explosions are a recurring danger in Nigeria, where they are usually caused by attempts to steal from the pipelines. One such fire killed 60 people in 2018.

Nigeria is Africa’s leading producer and exporter of oil, but it has paid a price for its fossil fuel extraction. In the Niger Delta, that extraction has led to oil spills of 40 million liters (approximately 10.6 million liquid gallons) every year, The Guardian reported. This has polluted air and water and harmed residents’ health.

“You just need to take a tour to understand the magnitude of the environmental abuse,” Bayelsa state commissioner for the environment Udengs Eradiri told The Guardian. “[Bayelsa] used to be green, you could go to farm or fish. We used to have very impressive harvests. You would spend just an hour in the water and you have a lot of fish.”