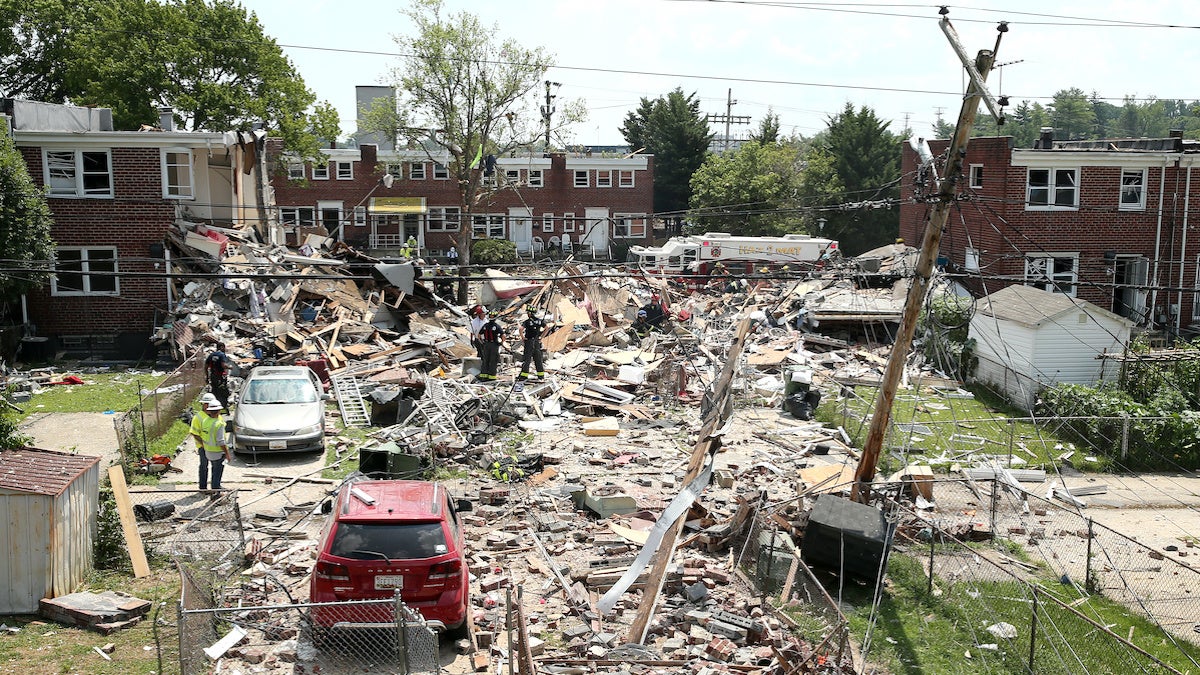 The blast destroyed three row homes in the northwestern Baltimore neighborhood of Reisterstown Station and ripped open a fourth, The Associated Press reported. One woman and one man were killed, city fire officials said, according to WJZ. Rescue crews and dogs worked to pull others from the rubble.

“I’ve never seen anything like that and I’ve lived in Baltimore City all my life,” neighbor Dean Jones told WBAL. “It’s almost like somebody just took a bomb out the side and dropped it on the three houses. It’s completely leveled.”

Here some images of today's fatal explosion in northwest Baltimore, 4200 block of Labyrinth Rd. We are assisting @BaltimoreFire with this emergency. EA pic.twitter.com/3hBc94Sa7M

The blast occurred just before 10 a.m. Monday. Fire Department spokeswoman Blair Adams told The New York Times it was a “major gas explosion.” She said Monday afternoon that rescue crews would continue to work overnight digging through the rubble if needed.

As FFs combed through the night, the body of an adult male was located just before 1am. #BCFD @BaltimoreOEM remain on the scene to assist with clean up efforts. The W. Balt. Explosion is now totaling 7 people injured & 2 deceased. The cause remains under investigation. pic.twitter.com/vxY29MeQca

The cause of the explosion is currently unknown. Baltimore Gas and Electric (BGE), the country’s oldest gas company, said it was investigating the incident, according to The New York Times.

The company said in a statement Monday that there were no gas readings or gas leaks found in the buildings or on the road where the explosion took place. There were also no reports of gas smells from the area before the incident. However, people on the ground told WJZ they smelled gas after the blast.

“BGE is committed to fully understanding the cause of this incident and will inspect all BGE equipment once rescue efforts are complete,” the company wrote in the statement.

BGE is currently working to replace thousands of miles of aging gas pipelines, according to a Baltimore Sun story reported by The New York Times. The number of leaks in the city has increased by 75 percent from 2009 to 2016, but the replacement process could take two decades.

“Founded in 1816, BGE is the oldest gas distribution company in the nation. Like many older gas systems, a larger portion of its gas main and services infrastructure consists of cast iron and bare steel – materials that are obsolete and susceptible to failure with age,” the Maryland Public Service Commission wrote when it approved the renovations in 2018, as The Associated Press reported.

The gas infrastructure in the area where the explosion hit was installed in the early 1960s, BGE said. But when the area was last inspected in June and July of 2019, no leaks were detected.

Climate campaigner and 350.org founder Bill McKibben wrote that the explosion was another argument for retiring gas heating altogether.

“Now that we have cheap, effective air source heat pumps, it’s time for public policy to help everyone finance them, beginning with the poorest Americans. It is utterly unnecessary to have a tube of flammable gas running into your house,” he tweeted.

Now that we have cheap, effective air source heat pumps, it's time for public policy to help everyone finance them, beginning with the poorest Americans. It is utterly unnecessary to have a tube of flammable gas running into your househttps://t.co/1AyEdFxyZm

Monday’s tragedy comes a little less than a year after another gas explosion destroyed part of an office complex in Columbia, Maryland. Luckily, no one was injured in that blast, according to The Associated Press.