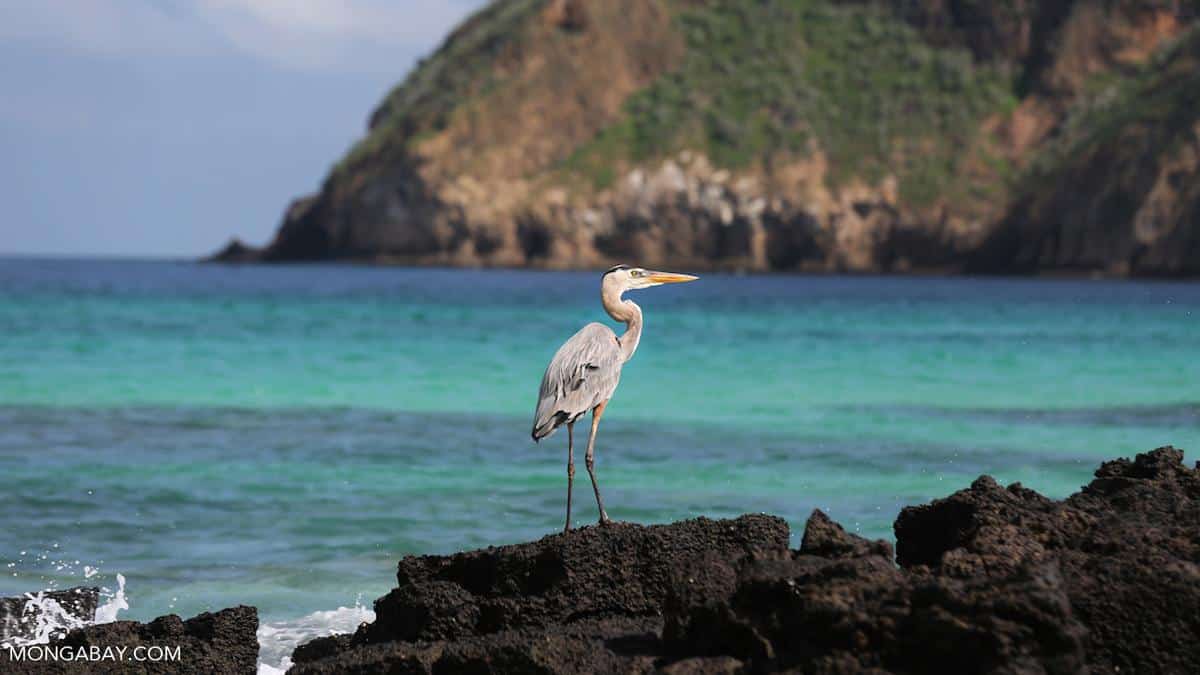 A heron in the Galapagos. Rhett A. Butler

A coalition of groups, including a newly formed organization backed by actor Leonardo DiCaprio, have mobilized $43 million for efforts to restore degraded habitats in the Galápagos Islands, an archipelago renowned for its endemic species and central role in scientists’ understanding of ecology and evolution.

The Galápagos initiative has three immediate priorities: Helping restore Floreana Island, one of the islands most degraded by human activities in the Galápagos; increasing the population size of the critically endangered pink iguana on Isabela Island; and strengthening protection of the archipelago’s marine reserves, which are critical to the local economy yet have been besieged by foreign fishing fleets in recent years. The initiative involves more than 40 partners, ranging from local NGOs to governments to international organizations, leveraging decades of collective experience working across the archipelago.

One of the groups leading the effort is Re:wild, an organization that was just formed between Global Wildlife Conservation and Leonardo DiCaprio, who is a founding board member of the new entity. The Galápagos initiative is Re:wild’s first project under its new brand, but the group plans to scale up its existing global work, putting renewed emphasis on the concept of rewilding, or restoring species and ecosystems to previous levels of abundance and health.

“Rewilding, a positive reframing for nature conservation, involves holistic solutions to remove barriers and reestablish vibrant wildlife populations and intact, functional, and resilient ecosystems that effectively integrate people,” said Re:wild in a press release. “Re:wild is a movement to build a world in balance with the wild.”

“We work to protect and restore nature in its wildest form as the primary solution to the triple threat of climate change, mass extinction and pandemics.” 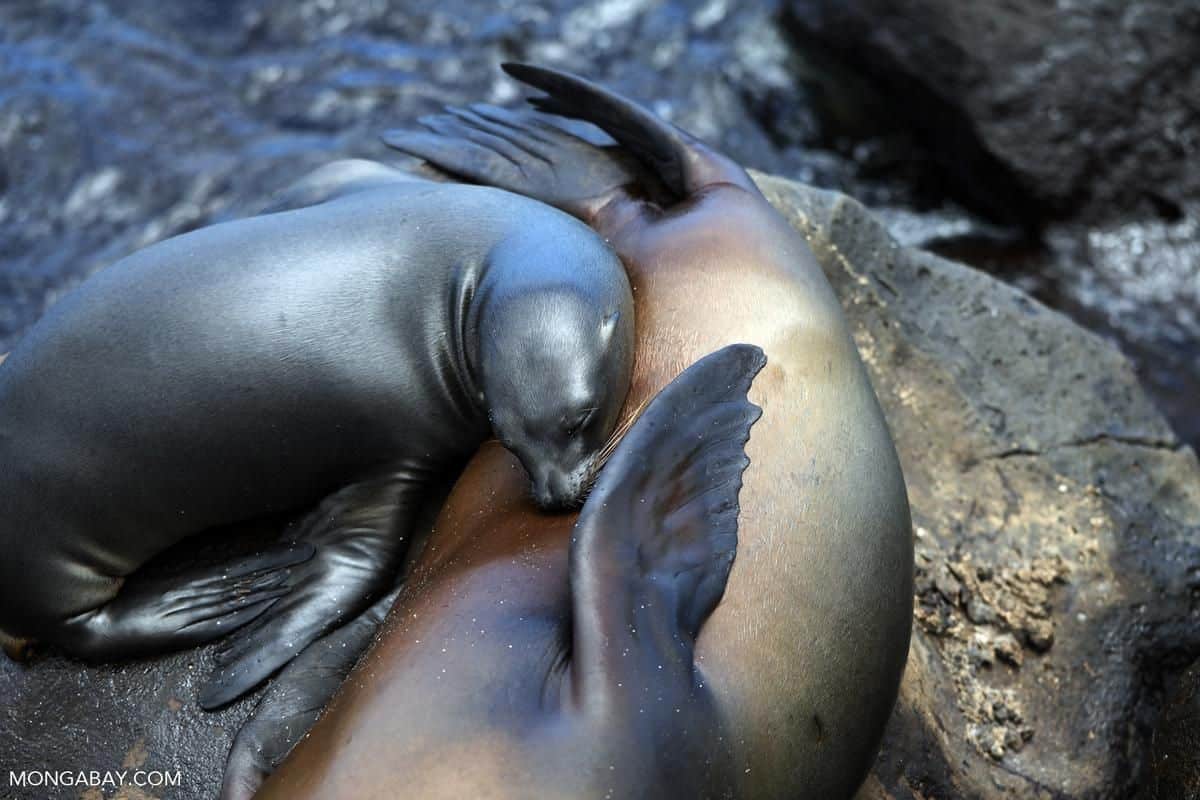 Sea lions in the Galapagos. Rhett A. Butler

In the case of the Galápagos, the new initiative has focused initially on targeted opportunities. For example, Floreana Island has great potential for restoration after loss of native vegetation and species from land clearing, intentional fire-setting, and the introduction of invasive species in the 18th and 19th centuries. The Galápagos initiative aims to reintroduce 13 species that have gone extinct and help increase the population of the island’s 54 threatened species.

The efforts in Floreana Island would be expanded to other parts of the Galápagos under the initiative, which over the next decade, hopes to restore another two dozen islands, “halt and reverse” the decline of 250 threatened species, and vastly increase the extent of areas under effective protection and management. At the same time, the initiative plans to help bolster the capacity of local and regional conservation and restoration experts as well as support the development of more sustainable and resilient economies for communities in the Galápagos.

To mark the start of the new initiative, DiCaprio is turning control of his social media accounts over to Paula A. Castaño, a veterinarian and biologist with Island Conservation who lives in the Galápagos Islands, for the day. DiCaprio has more than 86 million followers across his official Instagram, Twitter, and Facebook accounts.

“When I travelled to the Galápagos Islands, I met with Paula Castaño and other environmental heroes in Ecuador working day in and day out to save one of the most irreplaceable places on the planet. I’m excited to share her team’s work and to support the longstanding effort to protect and restore these iconic islands, alongside the team at Re:wild,” said Leonardo DiCaprio. “Around the world, the wild is declining. We have degraded three quarters of the wild places and pushed more than one million species to the brink of extinction. More than half of Earth’s remaining wild areas could disappear in the next few decades if we don’t decisively act. Fortunately, conservation leaders like Paula are showing us that it is not too late to reverse this alarming trend.

“Re:wild offers a bold vision to amplify and scale the local solutions being led by Indigenous peoples and local communities, nongovernmental organizations, companies, and government agencies, to help increase their impact around the world. The environmental heroes that the planet needs are already here. Now we all must rise to the challenge and join them.”

Castaño said that lessons from the efforts in the Galápagos could eventually be applied in other geographies to scale impact and reverse biodiversity decline.

“Time is running out for so many species, especially on islands where their small populations are vulnerable and threatened,” Castaño said in a statement. “We know how to prevent these extinctions and restore functional and thriving ecosystems — we have done it — but we need to replicate these successes, innovate and go to scale,”

“We need catalytic investments like the one announced today to replicate our successes in the Galápagos and elsewhere.”

“In order to reverse the climate crisis and ecosystem collapse, we need to focus on a ‘technology’ that took billions of years to refine, that is free, and that sustains us every single day: nature, in its most wild form,” said Sechrest in a statement. “Where better to begin than the Galápagos, which, as the first-declared World Heritage Site, is among the most extraordinary wild places on the planet. Re:wild’s work with partners is hope in action – from Darwin’s laboratory to Australia’s wildlands to the Congo forests of Central Africa.”