Scientists Use Drones to Eradicate Invasive Rats From Galapagos

In the Galapagos Islands, many of Darwin’s beloved animal species are getting a helping hand in the fight against invasive rats. Drones deployed over two years ago have finally eradicated all rodents on the Seymour Norte and Mosquera Islands.

According to the Galapagos Travel Center, the Islands are known for their unique wildlife — native, endemic and introduced. Endemic species are not found anywhere else on the planet. These include the famous Galapagos giant tortoise and the swimming marine iguanas. Charles Darwin’s study of the island chain’s endemic species led to his theory on evolution. The isolation of the habitat allowed for the evolution of very unique species and adaptations found nowhere else on the planet.

Ships visiting the islands during the 19th and 20th centuries brought with them black and brown rats that thrived with no natural predators, Drone DJ reported. They became an invasive species.

According to Nature, “Rats and other non-native species have caused extensive damage to the Galapagos, whose unique flora and fauna evolved in isolation for millions of years.”

That relative isolation may have caused many native species to lose their defense mechanisms against predators, the journal article said. Because rats reproduce quickly and eat a variety of plants and animals, they pose a particular threat to places like the Galapagos whose rich biodiversity is irreplaceable. The rodents especially threatened unhatched and young birds because they eat eggs and nestlings. They also threaten native trees by gnawing on their branches and eating their seeds, Nature reported. In fact, invasive rodent infestations are estimated to account for 86 percent of the known extinction of native wildlife on islands.

Therefore, rats have been the target of multiple eradication campaigns across the Galapagos, Nature reported. The eradication efforts were deemed “necessary” on the two Galapagos islands to protect indigenous wildlife, including frigate birds and swallow-tailed seagulls on the two islands in the Galapagos.

After a few failed manual attempts at eradication, the Galapagos National Park began deploying drones in Jan. 2019. Drones have the advantages of increased speed, efficiency and safety over manual baiting over rugged terrain, Nature and Drone DJ reported. And, they are cheaper than using helicopters, until now a favored tool in culling non-native animals. 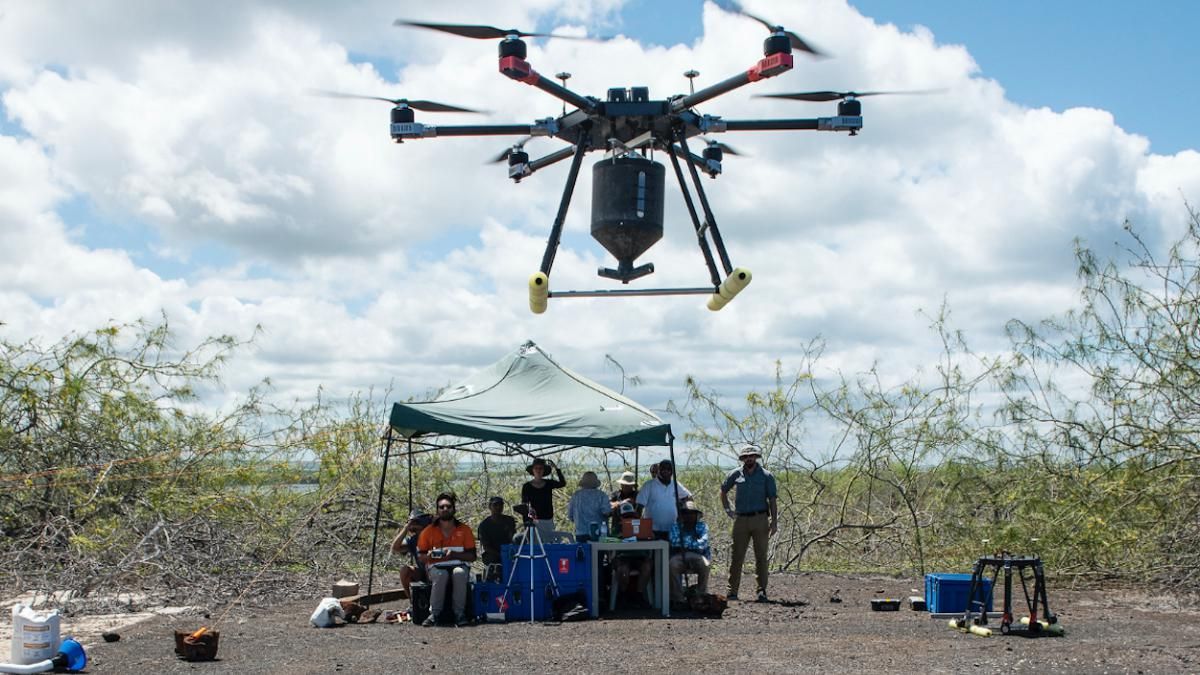 Scientists and drone pilots calibrate a drone before deploying it. Island Conservation

The drones dropped poisoned bait to areas with high rat concentrations. The rodenticide was specifically developed to only attract rats. According to Nature, it was the first time such an approach has been used on vertebrates in the wild.

After the main population had been eliminated, the drones were redeployed to replenish bait stations around the islands’ coasts to prevent new rats from migrating from surrounding islets. Good News Network reported that a “biosecurity barrier” of 289 bait stations will remain permanently installed as a long-term preventative measure against reinvasion from rats on Santa Crus or Baltra Islands.

Now, after a thorough inspection, the islands have finally been declared rat-free.

“After two years of waiting, this project has given the expected results, according to the planning and according to the highest protocols for these cases,” Danny Rueda, director of the Galapagos National Park, said in a press release. “Galapagos, once again, is a benchmark in terms of the protection of this globally important ecosystem.”

The success of the Galapagos campaign has been encouraging. Plans are in place to replicate the program on other small Pacific islands battling rats where hand-based baiting is not feasible, Good News Network reported.

While use in animal control is a new development, drones have been used to monitor animals and ecosystems, Nature reported. Conservationists have discussed using drones to stop poaching and to save endangered rhinos and elephants. The technology is also being used to stealthily measure dolphin health. And, in the Amazon Rainforest, Indigenous tribes are using drones to detect and fight illegal deforestation in their territories.

Worldwide, in over 1,200 recent eradication campaigns against destructive, invasive mammals, nearly 85 percent have proven successful, Drone DJ reported. Those advocating for the use of drones hope to increase that percentage even further.

Serge Wich, a biologist at Liverpool John Moores University, UK and a co-director of the website Conservation Drones, told Nature, “Almost every conservation organization I work with is using drones now, in one way or another.”