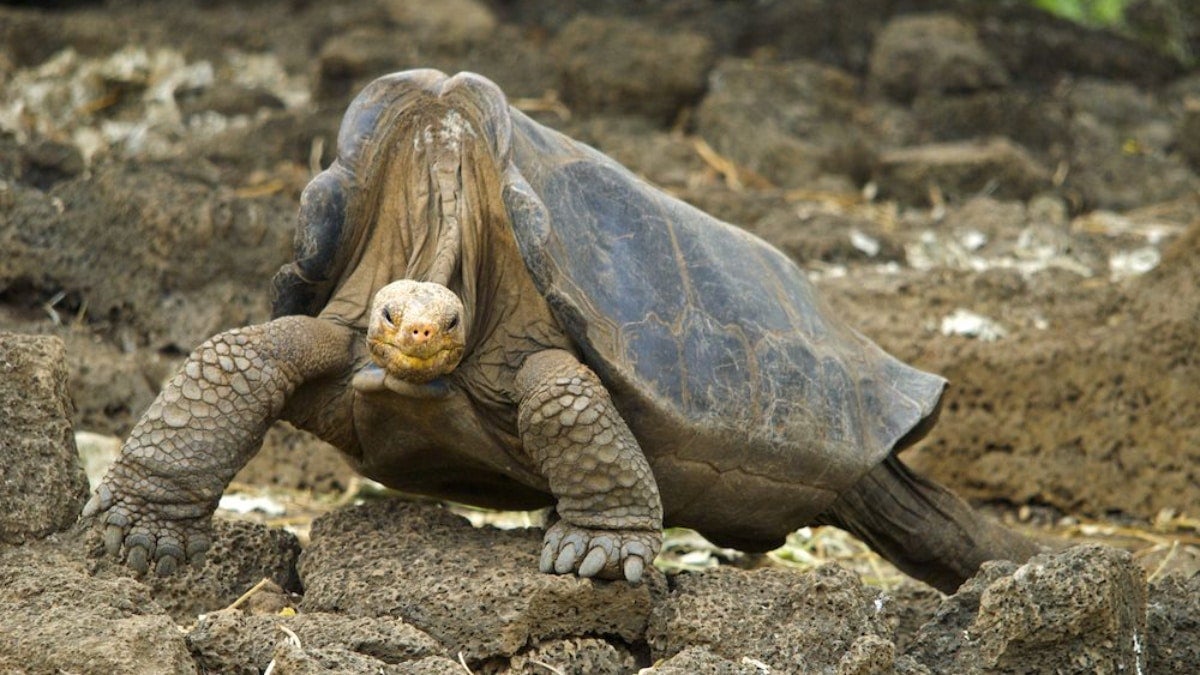 Linda J. Cayot’s scientific focus for the day was a male giant tortoise, part of her dissertation research on the ecology of these iconic Galápagos reptiles. When her study animal lumbered into a swirling torrent of muddy El Niño waters, the intrepid scientist jumped in, too. Together they banged against rocks, his carapace and her daypack catching on tree branches as they thumped in tandem down the river to the lowlands of Santa Cruz Island.

Cayot’s epic 1983 journey launched a 40-year career devoted to conserving the Galápagos Islands. She supervised giant tortoise and land iguana breeding programs; organized campaigns to eradicate invasive species; and coordinated repatriation of tortoises to their native islands. When she began working in the Galápagos, the islands’ giant tortoise populations were down to less than 10% of their historic abundance. They’ve grown since then, bolstered by programs she helped put in place.

Cayot studied Galápagos giant tortoises on many islands during her 40-year career. This 1982 photo is from Pinzon Island. (© Theresa Kineke Brooks, used with permission)

The goal remains to restore tortoise populations to their historic numbers and distribution. At the current rate, that might be achieved within two centuries.

For Cayot, who thinks of conservation in terms of deep time, it’s the trajectory that’s critical.

She retired early this year and has just completed co-writing and editing Galápagos Giant Tortoises, a synthesis of knowledge of these island endemics, including the 60-year history of their conservation. Cayot was honored in October with the Prichard Turtle Conservation Award for Lifetime Achievement.

Cayot is a visionary with a practical, one-step-at-a-time approach. If she hadn’t fallen in love with Galápagos, she says, she would have been conserving species somewhere else.

When I asked her about the lessons she’s learned from a lifetime of conservation, it came as no surprise that her succinct responses made little mention of tortoises or the Galápagos. Instead she focused on universal elements that speak to the human element of conservation.

“You accomplish much more conservation by having good relationships with everyone,” says Linda Cayot.

As a scientist Cayot worked with Galápagos National Park Directorate rangers who were fresh out of high school, as well as some of the world’s leading herpetologists and geneticists. She sought out people with the tools and ability to solve problems, regardless of their credentials.

Wacho Tapia is among of them. When he was a 17-year-old Galapagoan volunteer Cayot recognized his passion for giant tortoises and determination to save them. Now director of Galápagos Conservancy’s Giant Tortoise Restoration Initiative, Tapia’s years of working with Cayot ensure continuity in the tortoise restoration projects she initiated.

The respect Cayot demonstrated throughout her career is reflected in a small incident on Pinta Island. She asked Joe Flanagan, an American collaborator and chief veterinarian at the Houston Zoo, to document the repatriation of tortoises by photographing the park rangers carrying them to their release sites. One after another refused to be photographed. But when he said the photos were for Cayot, each ranger agreed. Some even primped.

“Linda recognizes that most conservation problems are caused by people, but she strongly believes that people are also the solution,” Flanagan says.

“Projects can take 50 years,” says Cayot. “That’s a hell of a long time! But those are the projects that push conservation forward.”

Cayot has always maintained a long-term vision. But working in the Galápagos honed it from years to decades and centuries.

The successful projects she worked on included repatriating tortoises to Española, the southernmost island. In the 1960s park rangers found just 14 tortoises there.

They took them to the Santa Cruz breeding center, added a male from the San Diego Zoo, and launched a breeding program Cayot later supervised. When young tortoises born at the center were old enough to survive out of captivity, they were released on the island of their ancestors.

In June Galápagos Park marked the successful conclusion of the project by returning the original tortoises to Española — 55 years after removing them — to join their progeny and the offspring they in turn had produced.

Cayot also had a central role in eradicating invasive species from the islands. When she first arrived in Galápagos, the southern rim of Alcedo Volcano was covered with Zanthoxylum trees. By the early 1990s, invasive goats were destroying the forest, a critical area for giant tortoises. Cayot coordinated Project Isabela, the largest invasive species eradication ever attempted anywhere.

It took nearly a decade. Today the vegetation is slowly regenerating. Full restoration will take decades more, but that’s not a problem in her mind: Cayot views Galápagos conservation in 100-year increments.

“I worked on the everyday details of Project Isabela, but I was thinking ahead to a century and beyond,” she says.

“Don’t worry if it takes a long time,” says Cayot. “Emerging knowledge may result in significant changes and greater success in the end.”

In 1972 Lonesome George, the last Pinta Island tortoise, was taken to a Santa Cruz Island pen for his protection. Scientists later decided to return tortoises to Pinta, where the habitat was declining without them. Although they would not be the endemic Pinta species, they would still disperse native plant seeds and modify habitat to help other animals and plants thrive, scientists reasoned.

But the herpetologists working on Galápagos tortoise conservation disagreed, and breeding tortoises were never moved to Pinta.

It ended up being a fortuitous delay. Soon expeditions to Wolf Volcano, a remote island where a variety of tortoise species roamed, discovered living tortoises with mixed ancestry, including the Pinta tortoise. That sparked hope that scientists might eventually find others more closely related to Lonesome George — a better option for release on Pinta.

For now, though, this northernmost island remains without the tortoises that evolved there. And that may be for the best.

“We don’t know everything,” says Cayot. “The more knowledge we get the more carefully we can find the right tortoises for that island.”

Collaboration: One Solution From Many Agendas

“You can see the excitement growing when you come up with solutions no one had thought of before,” says Cayot.

When Cayot began coordinating Project Isabela, she knew it would only succeed if Galápagos Park Directorate and Charles Darwin Research Station worked together.

Because they’d never officially co-run a project, Cayot spent an evening sewing. She took a park hat and a station hat — each of which bore an image of a tortoise — cut them both in half and stitched them back together, making the bisected embroidered tortoise whole again. Cayot wore that hat when she gave talks, pulling it on if discussions became contentious.

Linda Cayot made this hat out of a Galápagos Park cap and a Charles Darwin Research Station cap to symbolize and promote the cooperation required for the projects they shared. (© Jane Braxton Little, used with permission)

The grand plan to restore giant tortoises to their historic numbers and distribution included an international workshop in 2012 that she facilitated. Scientists and rangers were beginning to design expeditions to Wolf Volcano. The geneticists focused on finding animals with genetic material from two extinct species and breeding them, a process that would involve multiple generations and take at least 100 years. Conservationists also wanted to find the highest genetic matches possible, but their priority was getting tortoises onto the islands, where they’re key to habitat restoration; they couldn’t wait a century.

These differences challenged geneticists and conservationists alike to be creative. The solution they adopted is the basis for an ambitious plan to revive extinct species and restore island ecosystems. They’re using the knowledge of the geneticists to select the best animals to breed in captivity. Those with lesser genetic material will be released to the islands of their ancestors, satisfying the conservationists’ goal.

“With everyone willing to think outside the box, we ended up with novel solutions, ones that we all liked better than our own individual plans,” Cayot says. “That can only happen when everyone values each other’s input and respects each other’s knowledge.”

Jane Braxton Little is an award-winning independent journalist who writes about science and the environment for publications that include The Atlantic, Audubon, Bay Nature, Discover, and Scientific American. Little is based in rural Plumas County, where she arrived years ago fresh out of Harvard graduate school for a summer that has yet to end.