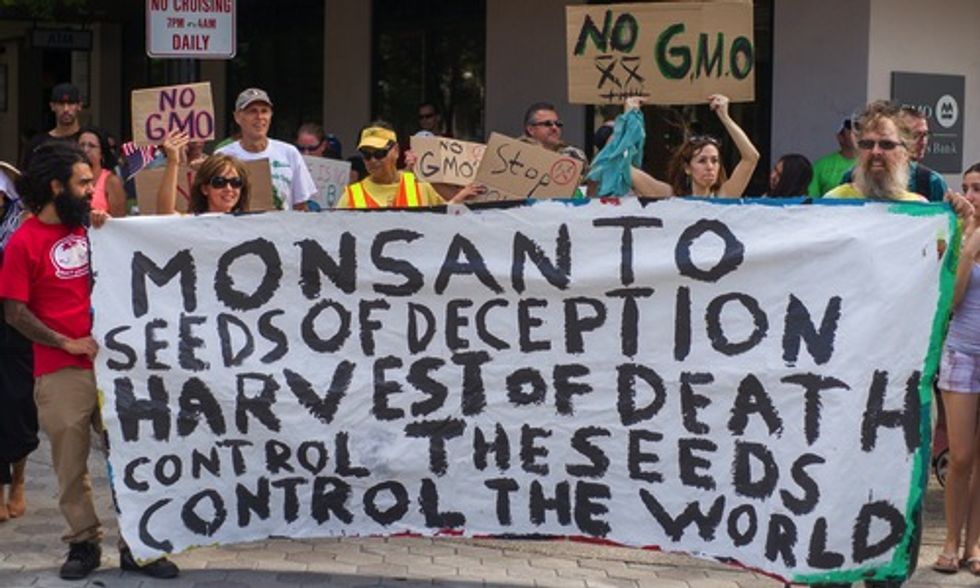 “The ground we gained in Washington, in the form of votes, is nothing compared with the ground—in the form of soil and farms and fields—we plan to take back from Monsanto in the months and years ahead. Watch out, Monsanto. We have plans. And those plans include taking back our seeds, our food, our farms, our rights. Our health. We will keep gaining ground. Until we reclaim it for the people.”—Katherine Paul, Organic Consumers Association, Nov. 7, 2013

Twelve months after narrowly defeating our organic and natural health movement in an expensive and bitterly fought California ballot initiative to label genetically engineered organisms (GMOs) in foods, Monsanto and the Grocery Manufacturers Association (GMA) are publicly bragging that they’ve beaten us again, 52 percent to 48 percent, in a similar ballot initiative in Washington state.

Protesters rally against Monsanto in Orlando, FL in May. Photo credit:
Shutterstock

But at what cost? Thanks to increased consumer awareness and resistance against GMOs, the biotech and junk food lobbies were forced to spend twice as much money per capita in Washington as they spent in California.

They stooped to laundering $12 million in funds from Big Food companies to hide their identities in the hope of avoiding another round of bad publicity. They had to launch the same scurrilous barrage of TV, radio and direct mail ads, falsely claiming that GMO food labels as prescribed by the initiative were “confusing” and “limited,” and would significantly increase food costs, hurt family farmers and benefit special interest groups.

Yes, at the end of the day, Monsanto and Big Food confused enough Washington voters to scrape out a narrow victory over the measure, called I-522, in a low-turnout, off-year election.

But just as in California, Big Food and Big Biotech privately acknowledged that I-522 was a hollow victory, another expensive, brand-damaging battle in a fruitless war against consumer choice, a war they will inevitably lose.

After spending $70 million in California and Washington, reaping tons of bad publicity in the process, large food corporations and biotech companies understand the enormous risk of fighting high-visibility battles defending a technology that 40 percent of the population believes is unsafe, while another 40 percent remains unsure.

The biotech and junk food lobbies also understand that public concern and anger are very likely to increase in 2014, given that a new generation of ever-more hazardous and outrageous Frankenfoods and crops, including genetically engineered salmon, apples and Agent Orange (2,4 D or dicamba-resistant) corn are about to be approved by the Obama administration. This is why the GMA blatantly broke the law in Washington, trying to conceal $12 million in campaign donations from some of the world’s largest and most profitable junk food companies, including Coke, Pepsi, Nestlé, General Mills and Kellogg’s.

And this is why the food giants and biotech bullies—Monsanto, Syngenta, Dow, BASF, Syngenta, and Bayer—now are secretly lobbying the federal government to take away states’ rights to pass mandatory labels on GMO food.

As Monsanto and the GMA understand, their dirty-money-dirty-tricks campaign in Washington has backfired, stimulating another consumer backlash, galvanizing an even larger and more radical anti-GMO grassroots movement than before. For the next 12 months the proponents of “no labels” on GMO foods will be facing legislative battles on labeling in no less than 30 states, with Vermont likely to pass mandatory labeling in early 2014.

Some major food companies, including Unilever and Mars, bruised by bad publicity and consumer boycotts, have broken ranks with the GMA and the biotech industry, arguing that GMO food labels are inevitable and must be accepted—just as they’ve had to accept them in Europe and dozens of other countries.

At least 30 leading mass-market food corporations, constituting a full 10 percent of the GMA's total membership, who contributed money to the “no labeling” effort in California, refused to make a donation against I-522 in Washington, fearing a backlash from consumers.

But what is perhaps most threatening to the national $800 billion food and factory farm industry is the fact that the organic and natural health movement appears to be growing not only more popular, but also more radical. A majority of today’s organic and local food activists, supported by the powerful natural health movement, are no longer just mobilizing to label or ban GMOs. They are also speaking out against industrial food and farming practices in general—pesticides, animal drugs, junk foods, antibiotics, growth promoters, climate disrupting nitrate fertilizer, and inhumane, polluting and disease-ridden factory farms. They are speaking out against the destructive practices of Big Pharma, which increasingly works hand-in-hand with Big Biotech and Big Food to supply the dangerous drugs, vaccines and growth promoters that make factory farming and genetic engineering profitable.

Millions of Americans are aware that chemical- and energy-intensive industrial food and farming as a whole—not just GMOs—pose a fundamental threat to public health, the environment and climate stability.

More and more critics and journalists are exposing the hazards and cruelty of factory-farmed meat, dairy and eggs, and the highly processed, chemical-laden junk food that constitute the bulk of America’s diet. Millions of health-conscious consumers now understand that for decades, non-organic processed foods have been diabolically engineered and laced with synthetic chemicals and additives designed to turn consumers and children into obese, cancer-and heart disease-prone junk food addicts.

Monsanto and Big Food’s greatest fear is materializing. A critical mass of educated consumers, food and natural health activists are organizing a powerful movement capable of overthrowing North America’s GMO and junk food empire. And they’re doing it by zeroing in on the Achilles heel of Food Inc.: misleading and outright fraudulent labeling and advertising.

Beyond California and Washington: How to Defeat the Biotech Bullies

Consumer polls indicate that the overwhelming majority of Americans want to know whether their food has been genetically engineered, and that they want these foods labeled. Not because of some abstract “right-to-know” motivation, which can be undermined, as we’ve seen in California and Washington by massive TV and radio advertising. But because consumers believe either that GMOs are dangerous, or that we don’t know enough about them to be sure that they aren’t dangerous.

We need to constantly remind Americans that their fear and uneasiness about giant chemical and seed companies tampering with their food is justified. We need labels on GMOs so that we consumers can defend ourselves, as well as animals and the environment, from these pesticide-drenched (Roundup-resistant) or pesticide impregnated (Bt-spliced) foods.

Unlike the ballot initiatives in California and Washington, where broad-based coalitions were only able to reach consensus on watered-down messages of “consumer right-to-know,” while sidestepping the more volatile issues of food safety and environmental destruction, we need to broadcast and repeat over and over again the justifiably alarming message of leading organic and natural health groups: We need to know if our foods are tainted with GMOs because there is mounting scientific evidence that genetically engineered foods are dangerous to human health, animals and the environment.

If anyone has any doubts about this mounting scientific evidence, you can point them to the respected website www.EarthOpenSource.org, where scores of independent, peer-reviewed scientists sound the alarm. Or to this statement signed by 230 scientists and physicians.

An example of how this more radical message is a winning strategy is the GMO labeling campaign in Vermont, where labeling advocates have not been afraid to point out that genetically engineered foods and crops are dangerous. The only reason the Vermont legislature has not dared to pass a law yet (this will likely change in a few months) is the repeated threat of Monsanto’s henchmen/women to sue the state in federal court if they dare to pass a law.

Polls indicate that another reason we narrowly lost in California and Washington was the “exemption issue.” The biotech industry incessantly broadcast its message, designed to confuse voters, that these GMO labeling laws would apply only to a limited number of foods, mainly processed foods, while ignoring others, including meat, eggs, dairy, restaurant and takeout foods. We need to take on this issue, head-on, not evade it. Millions of Americans want to know whether their food is genetically engineered or whether it comes from an inhumane, chemical-intensive, drug-intensive factory farm—whether they’re shopping in a grocery store or sitting down in a restaurant.

Our job, now and in the future will be to carry out public education, marketplace pressure and legislative campaigns designed to provide all of this information to consumers. In the future we will press for GMO or factory farm labels on all foods, whether they are purchased in grocery stores, restaurants, or school cafeterias. Current federal law prevents citizens from passing individual laws or ballot initiatives on food labeling that are all-inclusive. So we will need to draft and push multiple pieces of legislation and/or ballot initiatives so that nothing of significance is exempted. We believe that once consumers know whether grocery store, restaurant and school food is genetically engineered or factory-farmed, they will, in increasing numbers, choose organic and non-GMO food for themselves and their families.

We may have narrowly lost the first preliminary battles to label GMO foods in California and Washington in 2012 and 2013. But as we step up our resistance and deliver a more radical and comprehensive message in 2014, we will win the war. But we must be prepared to fight, not only for the right to know whether the food we are eating is genetically engineered or factory-farmed, but for democracy and sustainability on all fronts.

Without campaign finance reform or without breaking the stranglehold of large corporations and the wealthy over the media, the federal government and the judiciary, there can be no democracy. Without a balance of powers between the federal government, states and local home rule, there is no republic, but rather a Corporatocracy, an unholy alliance between indentured politicians and profit-at-any-cost corporations. Without changing our food system we will be unable to address the climate crisis, the most serious threat that human divination has ever faced. The battle for non-GMO, non-factory-farmed food and farming is a battle we cannot afford to lose.