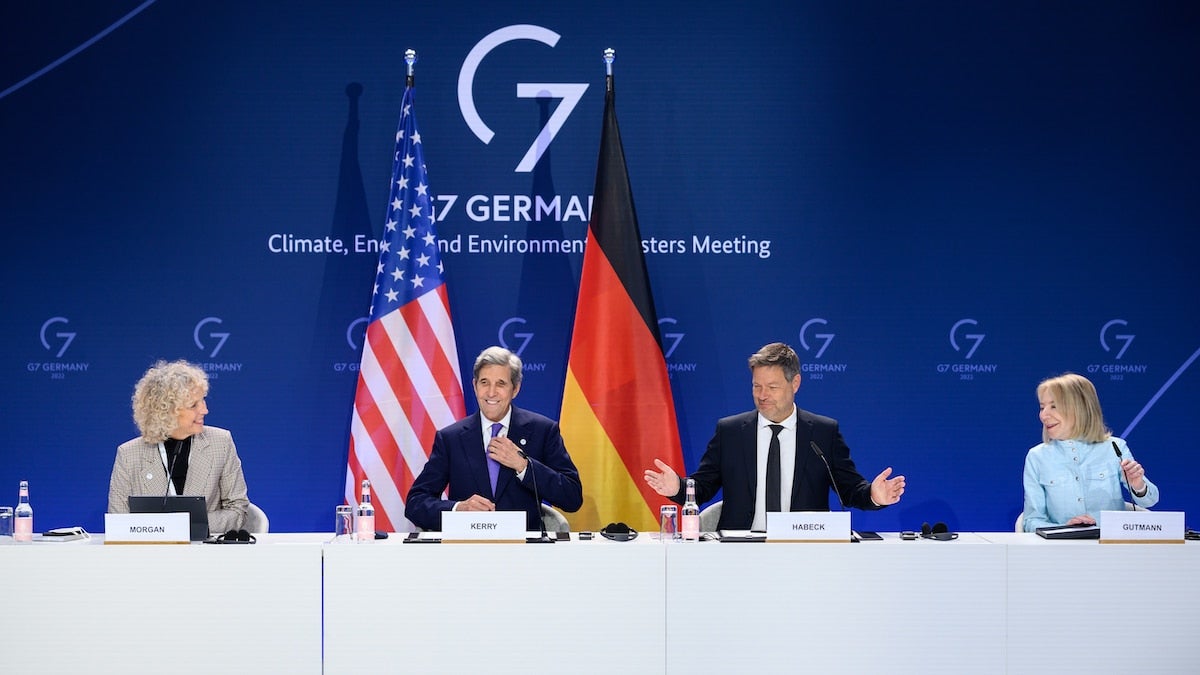 The meeting of the G7 ministers for climate, energy and environment in Berlin on May 27, 2022. Bernd von Jutrczenka / picture alliance via Getty Images

The G7 countries representing the world’s biggest economies made important climate commitments at the conclusion of three days of talks in Berlin on Friday, May 27.

The nations’ climate, energy, and environment ministers agreed to largely decarbonize their electricity sectors by 2035, phase out the use of coal, end inefficient fossil fuel subsidies by 2025 and stop most international funding for fossil fuel projects by the end of the year. The meeting occurred in the context of Russia’s invasion of Ukraine, which has sent energy prices soaring and left especially European countries with the question of what to do about their dependence on Russian fossil fuels in the context of the climate crisis.

“This is enormous progress, which is more important than ever in times like these and in view of Russia’s terrible war of aggression against Ukraine,” German Vice-Chancellor and Federal Minister for Economic Affairs and Climate Action Robert Habeck said, as Offshore Energy reported. “Climate action, the coal phase-out and the expansion of renewable energies are matters of national, European and international energy security. We have to take resolute action on them together.”

The G7 nations are Japan, the UK, the U.S., Canada, Italy, France and Germany. The decision to stop funding overseas fossil-fuel development is a milestone because Japan rejected a similar pledge last year before the COP26 UN climate conference, The Guardian pointed out. It builds on a commitment last year to stop international financing for coal, and could move $33 billion away from fossil fuels and towards renewable energy sources. It could also pull funding from some oil-and-gas projects currently in development that The Guardian found would make it impossible to limit the world to 1.5 degrees Celsius of warming if completed. However, some projects that have already begun may not be included in the finance freeze. Further, the ministers’ communiqué said that some projects might continue “in limited circumstances clearly defined by each country that are consistent with a 1.5 °C warming limit and the goals of the Paris Agreement.”

Still, climate advocates spoke in favor of the new agreement. Oil Change International campaign co-manager Laurie van der Burg called it a “massive win” as The Guardian reported. COP26 president Alok Sharma of the UK also said it was a positive development in the context of the Ukraine invasion.

“We are united in the view that climate and environment security are absolutely synonymous with energy and national security and I cannot overstate that,” he said, as The Guardian reported. “Solving the global energy crisis and the chronic climate crisis requires the same solution – it’s about reducing our dependence on fossil fuels as part of a managed transition.”

“The 2035 target for power sector decarbonisation is a real breakthrough,” ECCO director Luca Bergamaschi said, as Euronews reported. “In practice, this means countries need to phase out coal by 2030 at the latest.”

The ministers also said they wanted electric vehicles to dominate the market by 2030. The agreement will be considered by the leaders of the G7 nations at a summit at Elmau, Germany next month. U.S. climate envoy John Kerry said the agreement was “very comprehensive and forward-leaning” and hoped the G20 countries, which are responsible for 80 percent of global greenhouse gas emissions collectively, would follow suit.