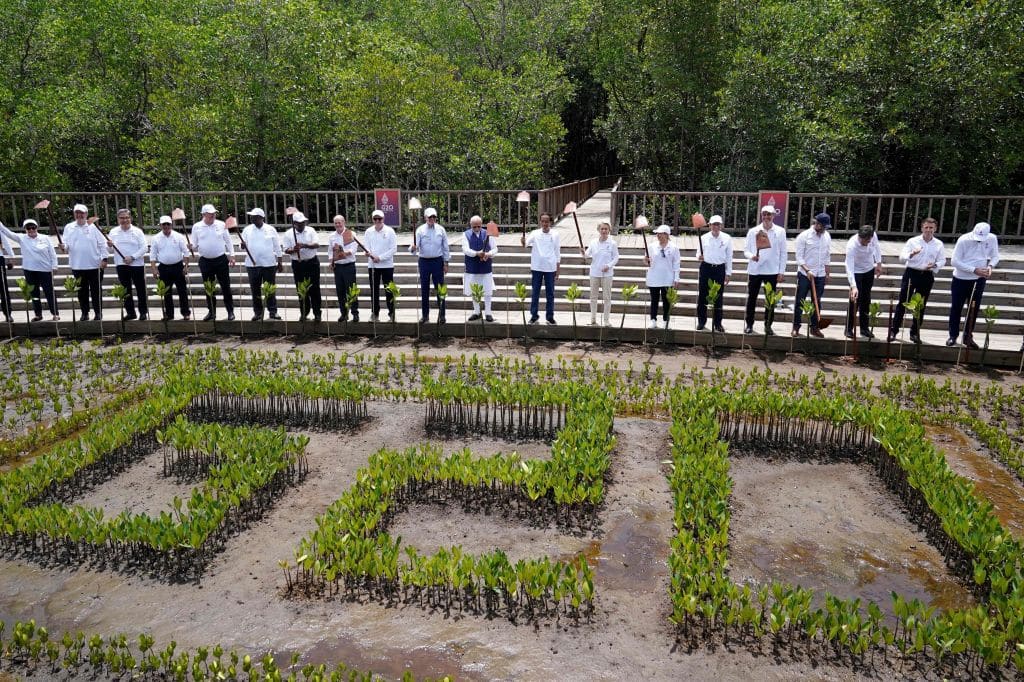 G20 leaders at a tree planting during the most recent summit in Bali, Indonesia. ALEX BRANDON / POOL /AFP / Getty Images

The G20 is a coalition of 19 countries and the European Union that together account for 80 percent of global Gross Domestic Product and 60 percent of the world’s population. The leaders of these developed or emerging economies met for the yearly G20 Heads of State and Government Summit in Bali, Indonesia, Tuesday and Wednesday and came away agreeing to continue progress towards limiting global temperatures to 1.5 degrees Celsius above pre-industrial levels, which scientists say is necessary to avoid the worst impacts of the climate crisis.

“Noting the IPCC assessments that the impact of climate change will be much lower at a temperature increase of 1.5°C compared with 2°C, we resolve to pursue efforts to limit the temperature increase to 1.5°C,” the leaders wrote in a statement published by the White House.

The agreement sent an important message to negotiators at the ongoing COP27 UN climate conference in Sharm el-Sheikh, Egypt, where a few countries balked at including the target in the COP’s final text, U.S. Special Climate Envoy John Kerry said on Saturday, as Reuters reported. The fact that some of the world’s highest emitters–including the U.S., China, the EU and India–have all now recommitted to the 1.5 target may help to solidify the goal among other nations.

The communique “sent an important signal — to the ministers and negotiators here at COP27 and to the whole world,” German climate envoy Jennifer Morgan told the Financial Times. “The G20 stand by the Glasgow climate pact and there cannot be any rollback on this here in Sharm el-Sheikh.”

Indeed, the statement included an affirmation of the most recent notable agreements in the UN Framework Convention on Climate Change (UNFCCC) COP process, including 2015’s Paris agreement committing to limiting warming to “well below” two degrees Celsius above pre-industrial levels and ideally 1.5 degrees, and the Glasgow Climate Pact for countries to strengthen their nationally determined contributions (NDCs) under the Paris agreement.

“We will play our part fully in implementing the Glasgow Climate Pact and the relevant outcomes of previous COPs and CMAs, in particular COP 26, including the call to revisit and strengthen the 2030 targets in our NDCs, as necessary to align with the Paris Agreement,” the leaders said. “In this regard, we welcome enhanced climate actions resulting from the new or updated NDCs and invite parties to urgently scale up mitigation and adaptation ambition and means of implementation as well as make progress on loss and damage at COP 27 which is being held in Africa.”

“Loss and damage” refers to funding to address the climate impacts already being felt by the most vulnerable countries, a point of contention at previous COPs that has been added to the agenda at COP27.

Ultimately, it’s unclear how effective the G20 statement will be at actually reducing emissions. Updated pledges to date under the Glasgow Climate Pact still put the world on track for 2.4 to 2.6 degrees of warming. However, it did outline what would need to happen to keep 1.5 alive.

“This will require meaningful and effective actions and commitment by all countries, taking into account different approaches, through the development of clear national pathways that align long-term ambition with short and medium-term goals, and with international cooperation and support, including finance and technology, and sustainable and responsible consumption and production as critical enablers, in the context of sustainable development,” the leaders said.