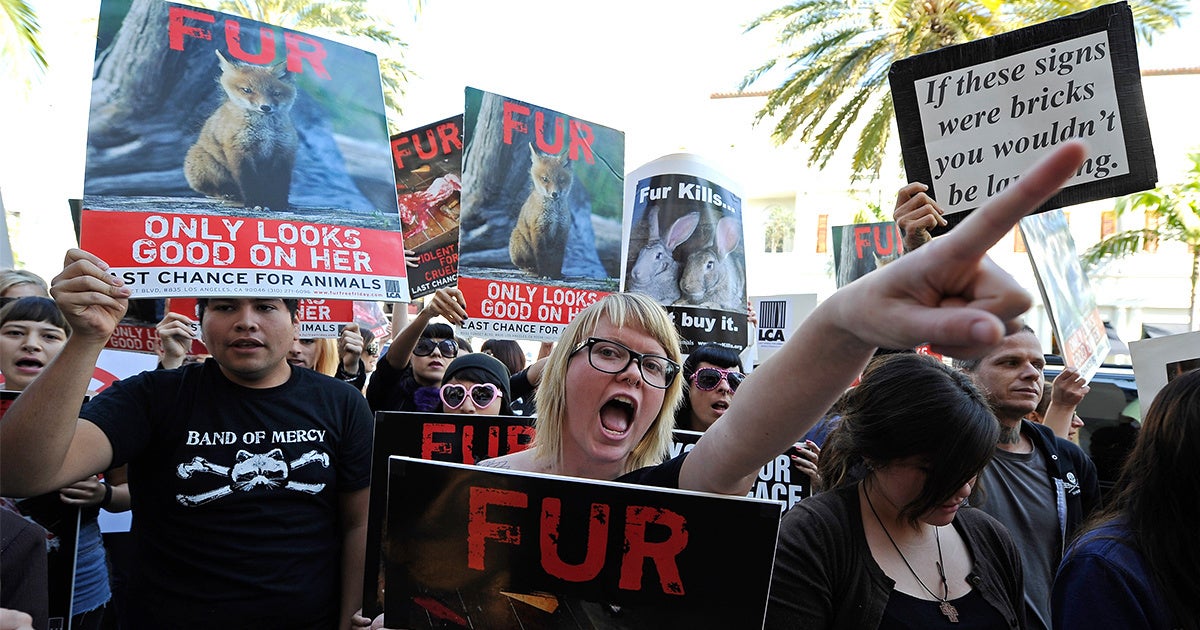 By Michael Sainato and Chelsea Skojec

In the 1980’s and 90’s, fur activists were mocked and viewed in the mainstream as a radical nuisance, embodied by a stereotype of dousing wearers of fur coats in red paint. Since then, undercover investigations and campaigns targeting leading fashion corporations have swayed public opinion against the use of fur in the fashion industry, and lawmakers have started to respond with proposals to ban its sale and manufacturing.

West Hollywood, California was the first city in the U.S. to pass a fur ban in 2011. Berkeley followed in 2017, with San Francisco passing their own fur ban in March 2018 and Los Angeles, the largest city to ban fur, passing the sale and manufacturing of fur within city limits in September 2018. As cities in California have led the way to banning fur in the U.S., a bill in the state assembly was recently proposed that would ban the sale and manufacturing of animal fur throughout the state of California.

“The City of Los Angeles has just gone through their process to ban the sale of fur, San Francisco had already done it and several other cities, so I felt it was time to have the conversation at the state level,” said California Assemblymember Laura Friedman, the author of the legislation, AB44, which passed a vote in the appropriations committee and will likely reach a floor vote within a few weeks. “We have a lot of evidence and heard from clothing manufacturers that it’s nearly impossible to find out whether the fur was sourced for clothing is raised in a humane way.”

In the U.S., the animal fur industry is widely unregulated and receives little to no oversight from the government. The results of this lack of transparency have been uncovered in recent investigations of animal fur farms in the U.S.

“The secrecy of the fur industry, and the secrecy they’re allowed by law enables them to have so much cruelty within their industry,” said Lewis Bernier, an activist with the animal rights organization Direct Action Everywhere (DxE). In 2018, Bernier led an investigation of a chinchilla fur farm in Ohio. Dxe declined to disclose the exact name, location of the farm or dates of the investigation due to legal concerns. “The cages were very tightly packed, row to row, wall to wall, with open cage designs so the ones on the bottom were being defecated and urinated on by the chinchillas on top of them. There was cannibalization and no way they were being provided necessary medical care.”

This cruelty and secrecy within the animal fur industry has driven consumer demand for cruelty-free products within the fashion industry, as leading fashion brands have stopped using animal fur. Gucci banned animal fur in 2017, as its CEO called it “outdated.” Michael Kors phased out using fur in December 2018. Versace announced its ban in March 2018. Chanel banned animal furs and exotic skins in December 2018. Gucci and Coach also went fur-free in 2018, joining other fashion brands such as Ralph Lauren, Giorgio Armani, Hugo Boss, Calvin Klein, Tommy Hilfiger and others that stopped using fur in previous years. For the first time, London’s fashion week in 2018 was completely fur-free as a requirement for brands to participate. On May 22, 2019, Prada announced it will begin phasing out the use of animal fur for its products.

“This is a clear global movement away from the use of animal furs, especially among the world’s most respected brands and retailers,” said Joshua Katcher, a New York City fashion designer and author of Fashion Animals. “The demand for brands to stand proudly of how things are made, not just what they look like. The demand for the beauty of an object and how it was made, more and more consumers want that and want to support these new systems they want to see flourish.”

Katcher noted these demands are felt by young designers who are seeking cutting edge, sustainable and ethical materials over materials like animal furs. “Animal fur is obsolete at this point,” he added.

In New York City, city council members are currently in the process of deciding on a bill to ban the sale of new animal fur products within the city after public hearings were held on May 15. A recent poll conducted by Mason-Dixon found 75 percent of New York City voters support the ban. No date has yet been set on when the city council will decide on the legislation.

Dan Matthews, senior vice president of campaigns at PETA, was one of the bill supporters present at the hearing to demonstrate to council members the type of animal traps used by fur traders to catch animals.

“Trap lines are completely self regulated, nobody can check on them because only the trapper knows where they’ve placed the traps and the coyote trap I’ve been showing to council members is a coyote trap meant for coyotes, but they don’t discriminate. They often trap family dogs, cats, owls, other wildlife,” Matthews said. He noted the traps are used as close to New York City as Westchester County and Connecticut.

PETA has been one of the leading organizations against the animal fur industry, conducting several undercover investigations and targeted campaigns against clothing brands.

“We found minks in Maryland being injected with weed killer. We found a fur farmer in Indiana who electrocuted chinchillas with cords attached to a car battery, and he often didn’t use enough voltage so animals would come alive on the skinning table, which he thought was funny,” added Matthews. “So these fur farmers and trappers, they have no veterinary training and no interest in training, yet they are involved in killing animals for their business.”

In Hawaii, a bill to ban the sale of animal fur was introduced for the first time this year.

“I thought of all places our state doesn’t really need fur clothing given our warm, tropical climate,” said State Senator Mike Gabbard (D), who proposed the bill in January 2019. The bill, which received five co-sponsors in the Hawaii State Senate, was referred to the consumer protection and health committee, but did not receive a hearing this legislative session. “Sometimes it takes a couple years to get good legislation like this moving, so I plan to reintroduce the bill next session, in January 2020, and I hope Hawaii can be one of the first states to pass a fur ban.”

Kimberly Moore, spokesperson for the Fur Free Society, a non-profit that helped write the bill with Senator Gabbard, added, “The fact it was taken up as a legislative matter is extremely heartening because more and more countries are banning fur around the world.”

She cited examples of countries that have either banned fur farming or the sale of animal fur outright, including Serbia, Luxembourg, Norway, Croatia, Czech Republic, Macedonia, UK, Belgium, Japan, Austria, Slovenia, Bosnia and Herzegovina, and partial bans and regulations in several other countries around the world.

“The private market itself is moving away from fur and exotic skins. In the last couple of years, the movement against using fur has really accelerated,” Moore noted. “There was a little activity in the 1990s with PETA, but in the last couple of years there has been major movements by governments to ban the sale of fur. That trend is being picked up by more municipalities in the United States.”