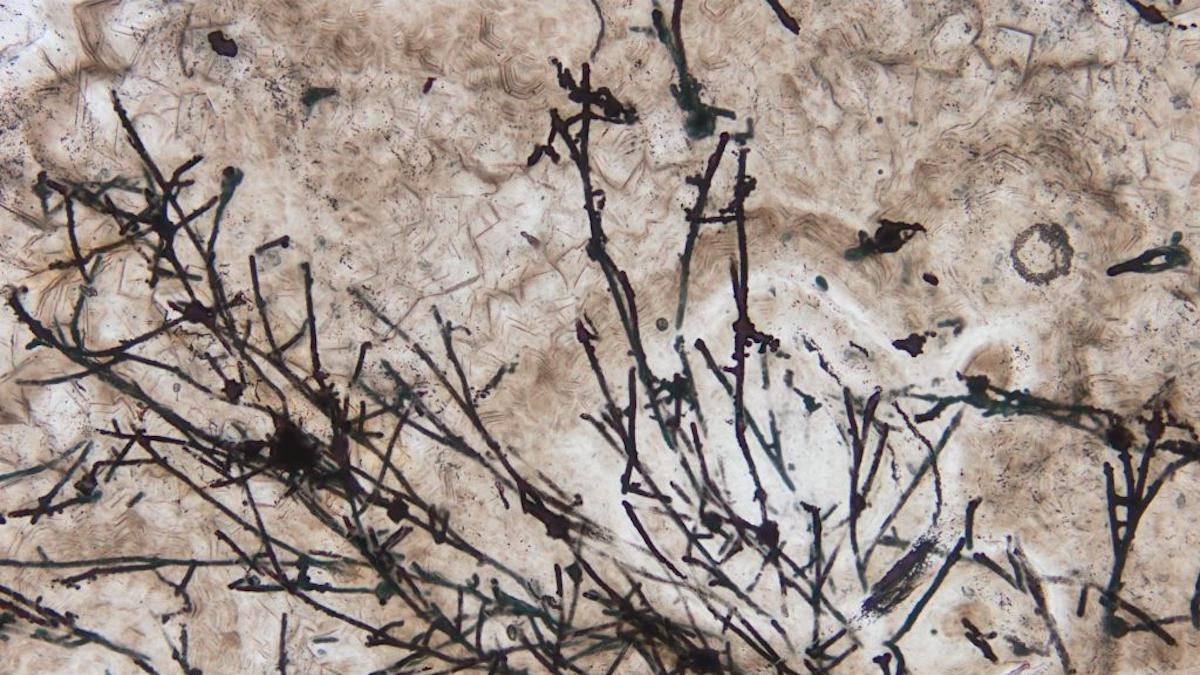 A microfossil scientists believe is the earliest evidence of land-based fungi. Andrew Czaja, University of Cincinnati

Scientists have uncovered what they believe to be the earliest evidence of fungus on land.

The evidence for this early fungus consists of a microfossil, found in a cave in southern China, that dates from about 635 million years ago, Live Science reported. The discovery isn’t just record breaking; it could also reveal important information about the evolution of life on Earth.

“The question used to be: ‘Were there fungi in the terrestrial realm before the rise of terrestrial plants’,” study coauthor and Virginia Tech geosciences professor Shuhai Xiao told Virginia Tech Daily. “And I think our study suggests yes. Our fungus-like fossil is 240 million years older than the previous record. This is, thus far, the oldest record of terrestrial fungi.”

The finding was published Jan. 28 in Nature Communications by researchers from Virginia Tech, the Chinese Academy of Sciences, Guizhou Education University, and the University of Cincinnati.

The fossil’s age may help scientists answer an important question: how did the Earth emerge from a brutal ice age known as “snowball Earth.”

Want to read about a 635 MILLION year old fungi-like fossil that may have brought us out of the Ice Age? Of course you do. https://t.co/6vFLlpw2a2 #FossilFriday @FralinLifeSci @vtgeosciences

The fossil dates from the Ediacaran period, which took place between 635 to 541 million years ago, Live Science explained. During that period, Earth was recovering from an ice age that froze ocean surfaces more than a kilometer (approximately 0.6 miles) deep, Virginia Tech Daily explained. It was a very hard time for all but microscopic life, and scientists have long wondered how more complex life was able to recover and thrive.

Now, they think fungi may have played a role. That’s because fungus breaks down minerals and organic matter and returns them to the ocean and atmosphere, Live Science explained. If the fossils found in China indicate a widespread phenomenon, it could mean that terrestrial fungi helped create a new geochemistry that pumped more oxygen into the air and triggered the evolution of life, the report authors wrote.

“Fungi have a mutualistic relationship with the roots of plants, which helps them mobilize minerals, such as phosphorus. Because of their connection to terrestrial plants and important nutritional cycles, terrestrial fungi have a driving influence on biochemical weathering, the global biogeochemical cycle, and ecological interactions,” study coauthor and visiting Ph.D. student in Xiao’s lab Tian Gan explained to Virginia Tech Daily.

The fossils were not easy to find. Microfossils are not visible to the naked eye, and researchers had to locate threadlike filaments about one-tenth of the width of a human hair, Live Science explained. To do this, they collected sedimentary rocks from China’s Doushantuo Formation in Guizhou Province. They then ground the rock into slices no more than 0.002 inches thick and searched for fossils under a powerful microscope.

“But it’s not error-proof; most times, we slice a rock, and we don’t find anything,” Xiao said. “There’s maybe a 10% success rate.”

Their discovery was extra lucky, because they had not been looking specifically for the earliest-ever evidence of land-based fungi.

“It was an accidental discovery,” Gan told Virginia Tech Daily. “At that moment, we realized that this could be the fossil that scientists have been looking for a long time.”

The researchers are also not 100 percent sure that the markings in the fossils belong to fungi.

“We would like to leave things open for other possibilities, as a part of our scientific inquiry,” Xiao told Virginia Tech Daily. “The best way to put it is that perhaps we have not disapproved that they are fungi, but they are the best interpretation that we have at the moment.”