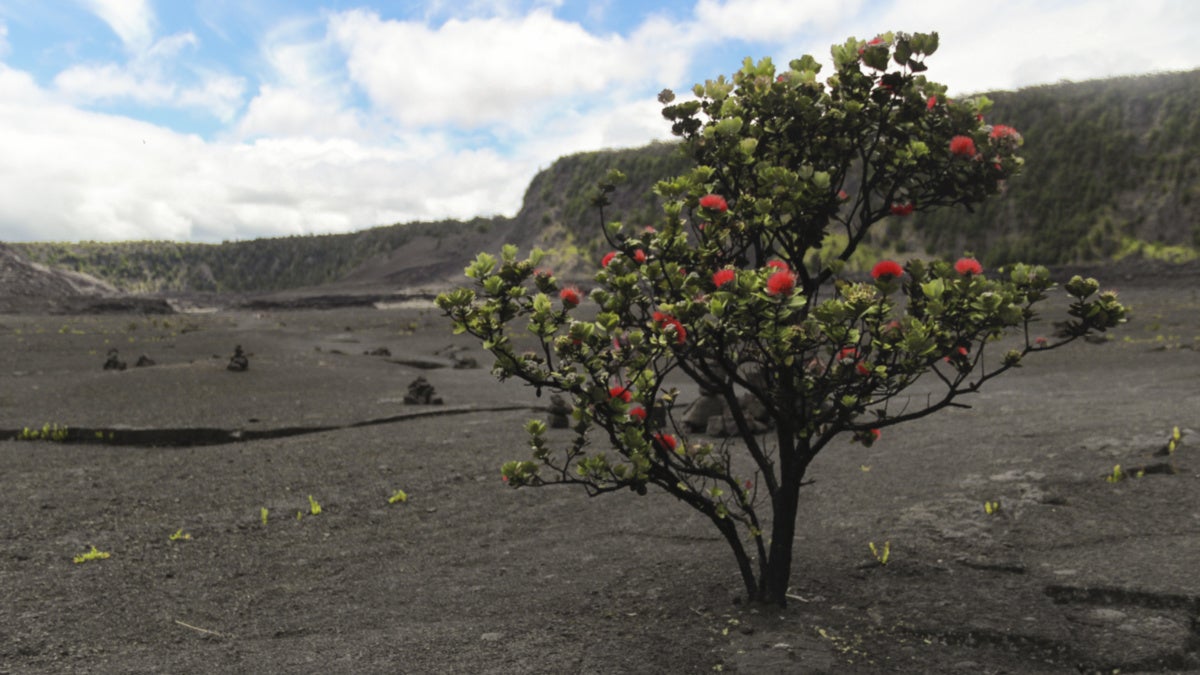 Hawaiian myth says that ‘ōhi’a lehua trees were created by Pele, the goddess of fire and creator of the Hawaiian islands. Spurned by a handsome young warrior, ʻŌhiʻa, she turned him into a twisted tree; the other gods, out of pity, turned his heartbroken lover, Lehua, into a flower, so that they would be joined together forever.

When the pathogen was first identified in 2014, the potential damage seemed catastrophic.

“The future looked bleak,” said Lisa Keith, a research plant pathologist at the U.S. Department of Agriculture’s Agricultural Research Service. “We really thought in a matter of years, there wasn’t going to be a healthy ‘ōhi’a forest.”

There’s still a lot scientists don’t know. But now, there are some bright spots in eradication efforts. Scientists have successfully implemented decontamination stations in sensitive areas on the Big Island, where ROD is more widespread, and there’s a better understanding about why trees are vulnerable to it.

ROD works by blocking the transport of water through trees; the leaves die first, followed by the rest of the tree. The fungus is comprised of two strains of Ceratocystis pathogen: C. lukuohia and C. huliohia. C. lukohia is more widespread and aggressive than C. huliohia, but both result in the death of the trees.

ROD mortality was first observed aerially on Hawai’i Island around 2008-2010, and Keith estimates it was introduced at least a decade before that. It’s possible C. huliohia was present even earlier.

“The current thinking is that C. huliohia has been in the islands much longer than C. lukuohia, and while capable of killing ‘ōhi’a trees, went unnoticed until the more aggressive lukuohia was discovered,” she said.

The pathogens first came to public attention in 2014, when large swaths of trees were infected on the Big Island. ROD can only infect trees if the bark is damaged and the inner wood exposed, said J.B. Friday, extension forester at the University of Hawai’i (UH), in an interview. He said he believes that damage to trees from Hurricane Iselle that year might have left them open to infection by the pathogen.

Because it is more prevalent on the Big Island, efforts there focus on containment rather than eradication. But scientists respond to every report of the pathogen on other islands, and in Kona and Kohala on the Big Island, where it hasn’t yet proliferated. Most of the time, infected trees are felled so that they’re less likely to spread pathogen spores, unless the forest is dense and other trees would be damaged.

Researchers are also working to understand more about the disease and how it spreads.

“One of the key principles that we study is called the disease triangle,” Keith said. “You have your fungus, you have a susceptible host, and you have the environment.” She is assessing each of these to determine whether there’s a way to combat the pathogen.

In her lab, she is inoculating seedlings with the fungus and studying their response. Some show resilience against it, which means they might be able to be used for future replanting efforts.

The fungus seems to prefer humid, low-elevation environments. Keith has tested trees at various elevations and found that those higher up seem to be protected somehow. “They’re susceptible, you have the pathogen, but because of the environment they don’t actually get the disease,” she said. “On the other hand, a tree at sea level could be dead in 45 days.”

Keith is also involved in the testing of samples, and recently developed a molecular test that can determine within hours whether the fungus is present, and if so, which strain. Previous testing methods could take up to a month.

Scientists are studying ways to reduce damage to the trees’ bark. Everyday human activity such as mowing grass or trimming trees can leave gashes, Friday said. “We’ve seen many cases where, for example, someone puts in a driveway and they prune all the trees along the driveway, and they’ll all die,” he said. And in areas without humans, natural events such as winds or storms can still cause branches to come down.

Beetles and wild ungulates are also thought to play a role in the pathogen’s spread. Boring beetles are attracted to dead and dying ‘ōhi’a wood, and they create dust that can spread and contaminate other trees. Cattle and goats can cause damage to bark, and researchers are studying whether feral pigs may also make the trees more susceptible by damaging their roots.

A 2016 study found that feral pigs were introduced to Hawai’i by Polynesians up to 800 years ago, not by Captain Cook, as was widely believed. But the pigs pose a danger to Hawaiian forests, because when they root among the dirt, they dislodge native plants, which can then leave forests more vulnerable to invasive species.

The damage done depends on how healthy the forest is, Friday said. For example, losing a single tree in a native forest wouldn’t have a large impact. But in a location where invasive species are growing in the understory, loss of a native ‘ōhi’a tree would leave an opening for those species to grow.

Hunting pigs is a popular pastime among many residents, and officials have also allowed it as a means to control populations.

ROD can additionally be transported through vehicles, people, and wood from infected trees. But it doesn’t spread in a clear pattern, and not all trees are affected, even at low elevations.

“You will see brown leaves on one tree, but its neighbor right next door looks healthy,” Keith said.

New developments in eradication efforts include a remote-sensing system and a branch-sampling device that can take wood samples in remote locations. Both were created in 2019 by Ryan Perroy, an associate professor of geography and principle investigator at the UH Hilo Spatial Data Analysis and Visualization lab. For the sampling device, he modified an existing drone from Swiss researchers at ETH Zürich.

The branch sampler still has some technical problems to work out before it is fully operational.

Sometimes ROD doesn’t spread all the way out to the tips of branches, or if it does, the branches become so brittle that they can’t be transported. However, sawing off larger branches would create dust, which researchers want to avoid.

Still, the device would allow researchers to verify the presence of the disease. “We could then send people in if it was determined to be worthwhile to do so,” Perroy said.

The scientists encourage residents to avoid transporting wood or injuring ‘ōhi’a, and to clean tools, clothing, shoes and even vehicles before and after entering forests. They successfully implemented a program to decontaminate hikers and tour operators in sensitive areas, which tourists enthusiastically comply with, Friday said.

There are still more questions to answer. For example, how far can the dust spread? Can it infect only nearby trees, or can it travel between islands? Why does ROD infect some trees and not others?