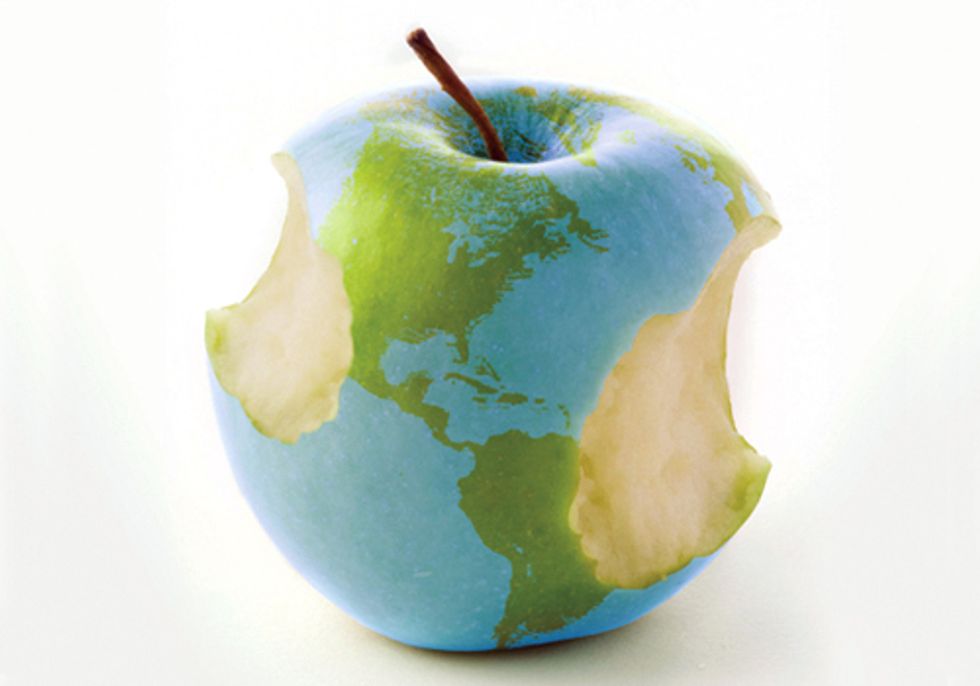 “The U.S. Great Drought of 2012 has raised corn prices to the highest level in history. The world price of food, which has already doubled over the last decade, is slated to climb higher, ushering in a new wave of food unrest,” says Lester R. Brown, author of Full Planet, Empty Plates: The New Geopolitics of Food Scarcity (W.W. Norton & Company).

“This year’s corn crop shortfall will accelerate the transition from the era of abundance and surpluses to an era of chronic scarcity,” notes Brown, president of the Earth Policy Institute, a Washington, D.C.-based environmental research organization. “As food prices climb, the worldwide competition for control of land and water resources is intensifying.

“In this new world, access to food is replacing access to oil as an overriding concern of governments. Food is the new oil, land is the new gold. Welcome to the new geopolitics of food.”

With prices rising, many of the world’s poorer families had already reduced their consumption to one meal a day. But unfortunately for many families, even this is no longer possible. Millions of households now routinely schedule foodless days each week—days when they will not eat at all.

A recent survey by Save the Children shows that 24 percent of families in India now have foodless days. For Nigeria, the comparable figure is 27 percent. For Peru, it is 14 percent.

In a hungry world, hunger often has a child’s face. Millions of children are dangerously hungry, some too weak to walk to school. Many are physically and mentally stunted.

Brown writes, “Even as hunger spreads, farmers are facing new challenges on both sides of the food equation. On the demand side, there have been two sources of demand growth. The oldest of these is population growth. Each year the world adds nearly 80 million people. Tonight there will be 219,000 people at the dinner table who were not there last night, many with empty plates.

“The second source of growing demand for grain is consumers moving up the food chain. As incomes rise, people eat more grain-intensive livestock and poultry products. Today, with incomes rising fast in emerging economies, there are at least 3 billion people moving up the food chain. The largest single concentration of these new meat eaters is in China, which now consumes twice as much meat as the United States.”

Now grain is also used to fuel cars. In 2011, the U.S. harvested nearly 400 million tons of grain. Of this, 127 million tons (32 percent) went to ethanol distilleries.

On the supply side, farmers continue to wrestle with the age-old threat of soil erosion. Some 30 percent of the world’s cropland is losing productive topsoil far faster than nature can replace it. Two huge new dust bowls are forming, one in Northwestern China and the other in Central Africa.

Beyond the loss of topsoil, three new challenges are emerging on the production front, says Brown. One, aquifers are being depleted and irrigation wells are starting to go dry in 18 countries that together contain half the world’s people. Two, in some of the more agriculturally advanced countries, rice and wheat yields per acre, which have been rising steadily for several decades, are beginning to plateau. And three, the earth’s temperature is rising, threatening to disrupt world agriculture in ways that can only be described as scary.

Among the countries where water tables are falling and aquifers are being depleted are the big three grain producers—China, India and the U.S. In India 175 million people are being fed with grain produced by overpumping. The comparable number for China is 130 million. In the U.S., the irrigated area is shrinking in leading farm states such as California and Texas as aquifers are depleted and irrigation water is diverted to cities.

Two, after several decades of rising grain yields, some of the more agriculturally advanced countries are hitting a glass ceiling, a limit that was not widely anticipated. Rice yields in Japan, a pioneer in raising yields, have not increased for 17 years. In both Japan and South Korea, yields have plateaued at just under 5 tons per hectare. (1 hectare = 2.47 acres.) China’s rice yields are now closely approaching those of Japan and may also soon plateau.

A similar situation exists with wheat yields. In France, Germany and the United Kingdom—the three leading wheat producers in Western Europe—there has been no rise for more than a decade. Other countries will soon be hitting their glass ceilings for grain yields.

“The third new challenge confronting farmers is global warming,” writes Brown. “The massive burning of fossil fuels is increasing the level of carbon dioxide in the atmosphere, raising the earth’s temperature and disrupting climate. Historically when there was an extreme weather event—an intense heat wave or a drought—things would likely be back to normal by the next harvest. Now with climate in flux, there is no “norm” to return to.”

For each 1-degree-Celsius rise in temperature above the optimum during the growing season farmers can expect at least a 10-percent decline in grain yields. A study of the effect of temperature on corn and soybean yields in the United States found that a 1-degree-Celsius rise in temperature reduced yields 17 percent. If the world continues with business as usual, failing to address the climate issue, the earth’s temperature during this century could easily rise by 6 degrees Celsius (11 degrees Fahrenheit).

“The effect of high temperature on food production is on full display in the United States where the drought and heat that is covering much of the country, including most of the Corn Belt, will reduce the U.S. corn harvest by 30 percent or more,” says Brown.

Historically when food supplies tightened it was up to the agriculture department to adopt policies to boost agricultural output. But today it requires a far more complex policy response, one that rests heavily on other departments, importantly energy and family planning.

“If we cannot stabilize climate and population,” predicts Brown, “there may not be a humane solution to the food crisis that is unfolding.” Full Planet, Empty Plates is an effort to raise both public understanding of the challenge that we are facing and to generate support for the needed responses.