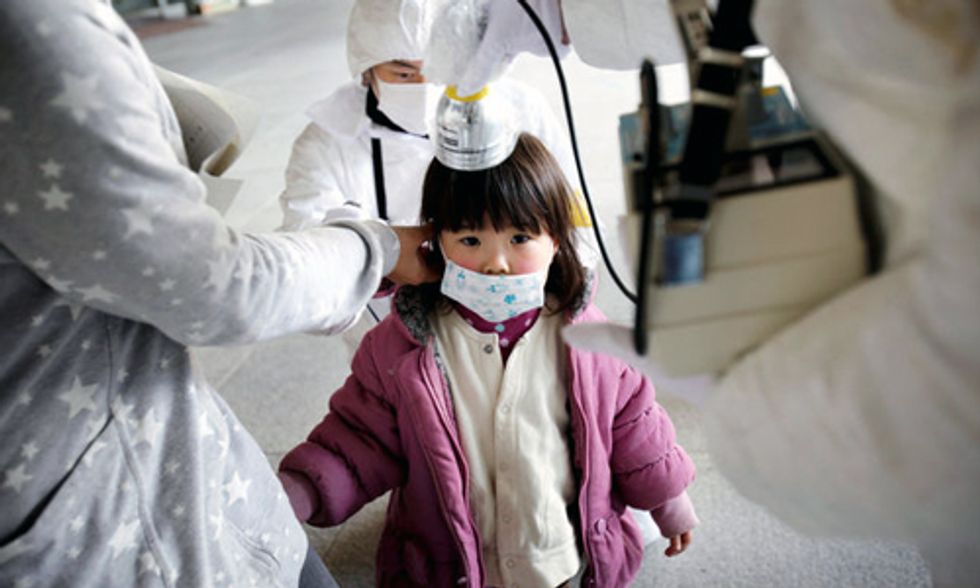 Some 39 months after the multiple explosions at Fukushima, thyroid cancer rates among nearby children have skyrocketed to more than forty times (40x) normal.

More than 48 percent of some 375,000 young people—nearly 200,000 kids—tested by the Fukushima Medical University near the smoldering reactors now suffer from pre-cancerous thyroid abnormalities, primarily nodules and cysts. The rate is accelerating.

More than 120 childhood cancers have been indicated where just three would be expected, says Joseph Mangano, executive director of the Radiation and Public Health Project.

The nuclear industry and its apologists continue to deny this public health tragedy. Some have actually asserted that "not one person" has been affected by Fukushima's massive radiation releases, which for some isotopes exceed Hiroshima by a factor of nearly 30.

More than 48 percent of some 375,000 young people—nearly 200,000 kids—tested by the Fukushima Medical University near the smoldering reactors now suffer from pre-cancerous thyroid abnormalities, primarily nodules and cysts.

But the deadly epidemic at Fukushima is consistent with impacts suffered among children near the 1979 accident at Three Mile Island and the 1986 explosion at Chernobyl, as well as findings at other commercial reactors.

The likelihood that atomic power could cause such epidemics has been confirmed by the Canadian Nuclear Safety Commission, which says that "an increase in the risk of childhood thyroid cancer" would accompany a reactor disaster.

In evaluating the prospects of new reactor construction in Canada, the Commission says the rate "would rise by 0.3 percent at a distance of 12 kilometers" from the accident. But that assumes the distribution of protective potassium iodide pills and a successful emergency evacuation, neither of which happened at Three Mile Island, Chernobyl or Fukushima.

The numbers have been analyzed by Mangano. He has studied the impacts of reactor-created radiation on human health since the 1980s, beginning his work with the legendary radiologist Dr. Ernest Sternglass and statistician Jay Gould.

Speaking on www.prn.fm's Green Power & Wellness Show, Mangano also confirms that the general health among downwind human populations improves when atomic reactors are shut down, and goes into decline when they open or re-open.

Nearby children are not the only casualties at Fukushima. Plant operator Masao Yoshida has died at age 58 of esophogeal cancer. Masao heroically refused to abandon Fukushima at the worst of the crisis, probably saving millions of lives. Workers at the site who are employed by independent contractors—many dominated by organized crime—are often not being monitored for radiation exposure at all. Public anger is rising over government plans to force families—many with small children—back into the heavily contaminated region around the plant.

The state of Pennsylvania mysteriously killed its tumor registry, then said there was “no evidence” that anyone had been killed.

But a wide range of independent studies confirm heightened infant death rates and excessive cancers among the general population. Excessive death, mutation and disease rates among local animals were confirmed by the Pennsylvania Department of Agriculture and local journalists.

In the 1980s federal Judge Sylvia Rambo blocked a class action suit by some 2,400 central Pennsylvania downwinders, claiming not enough radiation had escaped to harm anyone. But after 35 years, no one knows how much radiation escaped or where it went. Three Mile Island’s owners have quietly paid millions to downwind victims in exchange for gag orders.

At Chernobyl, a compendium of more than 5,000 studies has yielded an estimated death toll of more than 1,000,000 people.

The radiation effects on youngsters in downwind Belarus and Ukraine have been horrific. According to Mangano, some 80 percent of the “Children of Chernobyl” born downwind since the accident have been harmed by a wide range of impacts ranging from birth defects and thyroid cancer to long-term heart, respiratory and mental illnesses. The findings mean that just one in five young downwinders can be termed healthy.

Physicians for Social Responsibility and the German chapter of the International Physicians for the Prevention of Nuclear War have warned of parallel problems near Fukushima.

The United Nations Scientific Committee on the Effects of Atomic Radiation (UNSCEAR) has recently issued reports downplaying the disaster’s human impacts. UNSCEAR is interlocked with the United Nations’ International Atomic Energy Agency, whose mandate is to promote atomic power. The IAEA has a long-term controlling gag order on UN findings about reactor health impacts. For decades UNSCEAR and the World Health Organization have run protective cover for the nuclear industry’s widespread health impacts. Fukushima has proven no exception.

In response, Physicians for Social Responsibility and the German International Physicians for the Prevention of Nuclear War have issued a ten-point rebuttal, warning the public of the UN’s compromised credibility. The disaster is “ongoing” say the groups, and must be monitored for decades. “Things could have turned for the worse” if winds had been blowing toward Tokyo rather than out to sea (and towards America).

There is on-going risk from irradiated produce, and among site workers whose doses and health impacts are not being monitored. Current dose estimates among workers as well as downwinders are unreliable, and special notice must be taken of radiation’s severe impacts on the human embryo.

UNSCEAR’s studies on background radiation are also “misleading,” say the groups, and there must be further study of genetic radiation effects as well as “non-cancer diseases.” The UN assertion that “no discernible radiation-related health effects are expected among exposed members” is “cynical,” say the groups. They add that things were made worse by the official refusal to distribute potassium iodide, which might have protected the public from thyroid impacts from massive releases of radioactive I-131.

Overall, the horrific news from Fukushima can only get worse. Radiation from three lost cores is still being carried into the Pacific. Management of spent fuel rods in pools suspended in the air and scattered around the site remains fraught with danger.

The pro-nuclear Shinzo Abe regime wants to reopen Japan’s remaining 48 reactors. It has pushed hard for families who fled the disaster to re-occupy irradiated homes and villages.

But Three Mile Island, Chernobyl and the plague of death and disease now surfacing near Fukushima make it all too clear that the human cost of such decisions continues to escalate—with our children suffering first and worst.