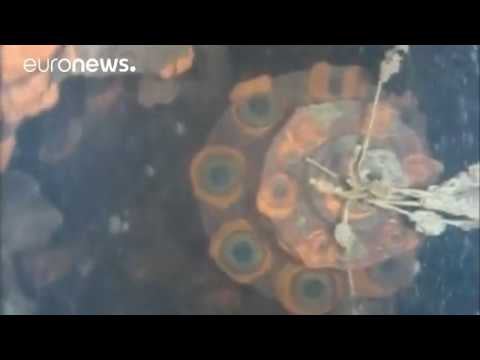 Captured by an underwater robot on Saturday, footage released by plant operator Tokyo Electric Power Company Holdings Inc. (Tepco) shows for the first time what appears to be melted nuclear fuel inside one of the destroyed Fukushima reactors in Japan.

According to the Japan Times:

“This is the first time Tepco has found something likely to be melted fuel. When the utility sent a different robot into reactor 2 in January, it found black lumps sticking to the grating in the primary containment vessel but said they were difficult to identify.

The objects spotted this time look like icicles hanging around a control rod drive attached to the bottom of the pressure vessel, which holds the core, Tokyo Electric Power Company Holdings Inc. said at an evening news conference Friday.

Enclosed by the huge primary containment vessel, the pressure vessel originally contained the fuel rod assemblies. But the rods melted into a puddle and burned through its bottom once the plant lost power after being swamped by the monstrous tsunami of March 11, 2011.”

The footage indicates just how much damage exists inside the three destroyed reactors at the plant. “The search for melted fuel in the two other reactors,” reported the Guardian, “has so far been unsuccessful because of damage and extremely high radiation levels.”