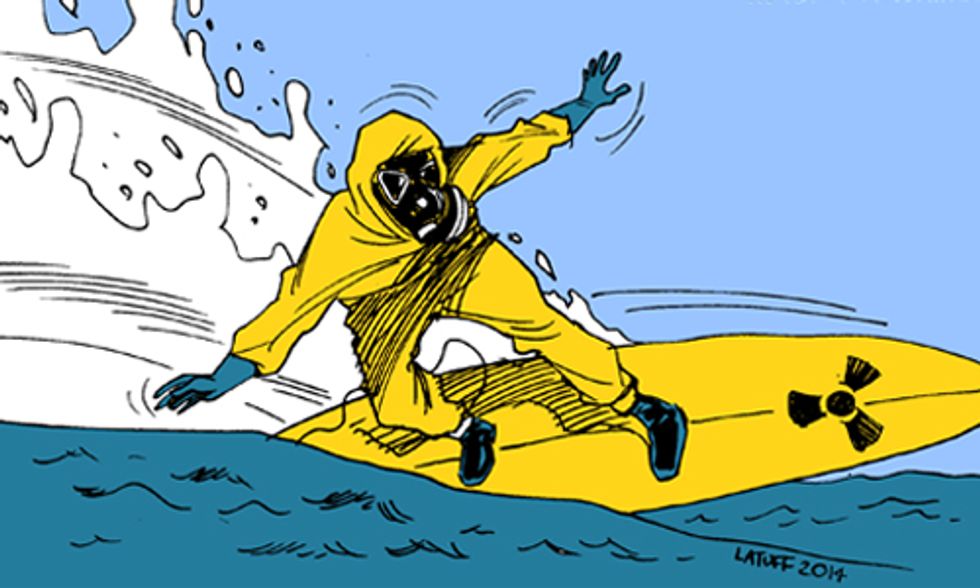 The corporate media silence on Fukushima has been deafening even though the melted-down nuclear power plant’s seaborne radiation is now washing up on American beaches.

Ever more radioactive water continues to pour into the Pacific.

At least three extremely volatile fuel assemblies are stuck high in the air at Unit 4. Three years after the March 11, 2011, disaster, nobody knows exactly where the melted cores from Units 1, 2 and 3 might be.

Amid a dicey cleanup infiltrated by organized crime, still more massive radiation releases are a real possibility at any time.

Radioactive groundwater washing through the complex is enough of a problem that Fukushima Daiichi owner Tepco has just won approval for a highly controversial ice wall to be constructed around the crippled reactor site. No wall of this scale and type has ever been built, and this one might not be ready for two years. Widespread skepticism has erupted surrounding its potential impact on the stability of the site and on the huge amounts of energy necessary to sustain it. Critics also doubt it would effectively guard the site from flooding and worry it could cause even more damage should power fail.

Meanwhile, children nearby are dying. The rate of thyroid cancers among some 250,000 area young people is more than 40 times normal. According to health expert Joseph Mangano, more than 46 percent have precancerous nodules and cysts on their thyroids. This is “just the beginning” of a tragic epidemic, he warns.

There is, however, some good news—exactly the kind the nuclear power industry does not want broadcast.

When the earthquake and consequent tsunami struck Fukushima, there were 54 commercial reactors licensed to operate in Japan, more than 12 percent of the global total.

As of today, not one has reopened. The six at Fukushima Daiichi will never operate again. Some 30 older reactors around Japan can’t meet current safety standards (a reality that could apply to 60 or more reactors that continue to operate here in the U.S.).

As part of his desperate push to reopen these reactors, Prime Minister Shinzo Abe has shuffled the country’s regulatory agencies, and removed at least one major industry critic, replacing him with a key industry supporter.

But last month a Japanese court denied a corporate demand to restart two newer reactors at the Ooi power plant in Fukui prefecture. The judges decided that uncertainty about when, where and how hard the inevitable next earthquake will hit makes it impossible to guarantee the safety of any reactor in Japan.

In other words, no reactor can reopen in Japan without endangering the nation, which the court could not condone.

Such legal defeats are extremely rare for Japan’s nuclear industry, and this one is likely to be overturned. But it dealt a stunning blow to Abe’s pro-nuke agenda.

In Fukushima’s wake, the Japanese public has become far more anti-nuclear. Deep-seated anger has spread over shoddy treatment and small compensation packages given downwind victims. In particular, concern has spread about small children being forced to move back into heavily contaminated areas around the plant.

Under Japanese law, local governments must approve any restart. Anti-nuclear candidates have been dividing the vote in recent elections, but the movement may be unifying and could eventually overwhelm the Abe administration.

A new comic book satirizing the Fukushima cleanup has become a nationwide best-seller. The country has also been rocked by revelations that some 700 workers fled the Fukushima Daiichi site at the peak of the accident. Just a handful of personnel were left to deal with the crisis, including the plant manager, who soon thereafter died of cancer.

In the meantime, Abe’s infamous, intensely repressive state secrets act has seriously constrained the flow of technical information. At least one nuclear opponent is being prosecuted for sending a critical tweet to an industry supporter. A professor jailed for criticizing the government’s handling of nuclear waste has come to the U.S. to speak.

The American corporate media have been dead silent or, alternatively, dismissive about the radiation now washing up on our shores, and about the extremely dangerous job of bringing intensely radioactive fuel rods down from their damaged pools.

Fukushima’s General Electric reactors feature spent fuel pools perched roughly 100 feet in the air. When the tsunami hit, thousands of rods were suspended over Units 1, 2, 3 and 4.

According to nuclear engineer Arnie Gundersen, the bring-down of the assemblies in Unit 4 may have hit a serious snag. Gundersen says that beginning in November 2013, Tokyo Electric Power removed about half of the suspended rods there. But at least three assemblies may be stuck. The more difficult half of the pile remains. And the pools at three other units remain problematic. An accident at any one of them could result in significant radiation releases, which have already far exceeded those from Chernobyl and from the bombings of Hiroshima and Nagasaki.

At least 300 tons of heavily contaminated Fukushima water still pour daily into the Pacific. Hundreds more tons are backed up on site, with Tepco apologists advocating they be dumped directly into the ocean without decontamination.

Despite billions of dollars in public aid, Tepco is still the principal owner of Fukushima. The “cleanup” has become a major profit center. Tepco boasted a strong return in 2013. Its fellow utilities are desperate to reopen other reactors that netted them huge annual cash flow.

Little of this has made its way into the American corporate media.

New studies from the Nuclear Regulatory Commission have underscored significant seismic threats to American commercial nuclear sites. Among those of particular concern are two reactors at Indian Point just north of New York City, which sit near the highly volatile Ramapo Fault, and two at Diablo Canyon, between Los Angeles and San Francisco, directly upwind of California’s Central Valley.

The U.S. industry has also suffered a huge blow at New Mexico’s Waste Isolation Pilot Project. Primarily a military dump, this showcase radioactive waste facility was meant to prove that the industry could handle its trash. No expense was spared in setting it up in the salt caverns of the desert southwest, officially deemed the perfect spot to dump the 70,000 tons of high-level fuel rods now backed up at American reactor sites.

But an explosion and highly significant radiation release at the pilot project last month has contaminated local residents and cast a deep cloud over any future plans to dispose of American reactor waste. The constant industry complaint that the barriers are “political” is absurd.

While the American reactor industry continues to suck billions of dollars from the public treasury, its allies in the corporate media seem increasingly hesitant to cover the news of post-Fukushima Japan.

In reality, those gutted reactors are still extremely dangerous. An angry public, whose children are suffering, has thus far managed to keep all other nukes shut in Japan. If they keep them down permanently, it will be a huge blow to the global nuke industry—one you almost certainly won’t see reported in the American corporate media.

Fukushima-Style Nuclear Power Plant in Washington Is a Seismic Timebomb