From Cities to Suburbs, Raising Backyard Chickens is All the Rage 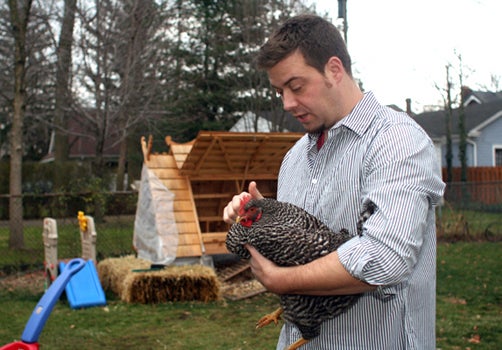 Boots crusted over with a layer of dried dirt, Matthew Wilson holds one of his Barred Rock hens as he walks through his garden. “Bitey developed more slowly than the others,” he says as he strokes her comb as if tending to his most fragile child. Bitey, so named because it often mistook his children’s toes for worms, has the characteristic black and white stripes of the breed, known for its high egg production, meaty body, and docile personality. 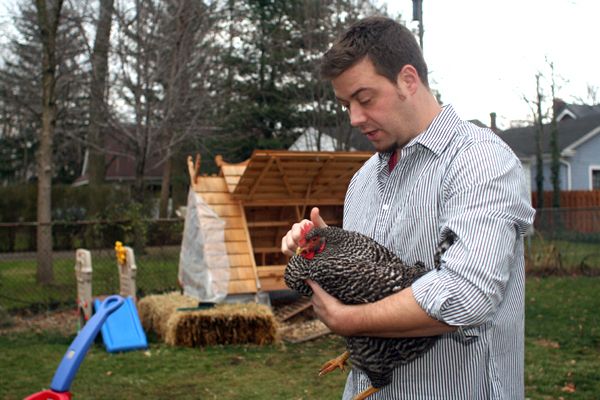 Matthew Wilson is standing in the middle of his large backyard in the suburban city of Cleveland Heights, Ohio, where he raises egg-laying hens. Photo courtesy of Matthew Wilson

His other Barred Rock hens are actively scavenging the remains of his garden, a growth of foot-high spindly Swiss chard and kale stems, the leaflessness a result of the voracious appetites of his hens. He feeds them food scraps such as old bread, tomatoes, grapes, and spent grains that he himself collects from a local brewery but they still overwhelm his garden vegetables. Yet, he shrugs off the loss of his garden: “We get it all back. It all shows up in the egg yolks. The yolks are a dark, rich, orange color.” Wilson points to a photograph that his friend snapped comparing a store-bought, yellow-yolked egg next to one of his dark orange-yolked eggs and the differences are obvious. He raves, “My egg shells are visibly different than store-bought eggs. Store-bought eggs are all very uniform, because the odd-shaped or odd-colored ones are thrown out. Mine are gloriously random.” 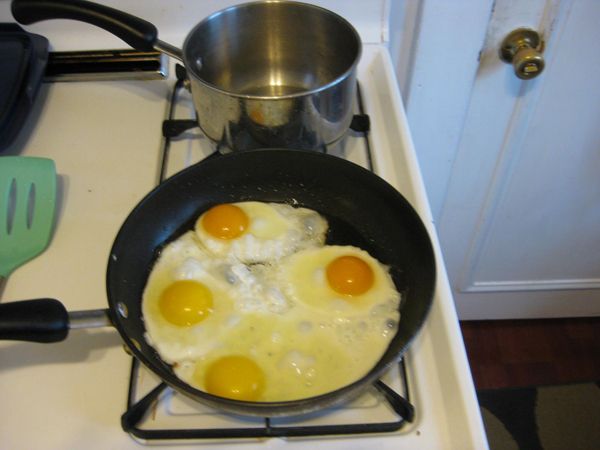 There’s nothing like fresh eggs. Photo courtesy of Matthew Wilson

Wilson is passionate about raising egg-laying hens and he can talk at length about different breeds of chickens, how they work together to trap sparrows, and how he monitors their egg-laying throughout the season. But Wilson is no farmer. He is standing in the middle of his large backyard in the suburban city of Cleveland Heights, Ohio, a suburb in the greater Cleveland metropolitan area of three million, and works full-time, but not in anything remotely related to farming. Remarkably, Wilson is a software engineer. Concern for their food supply is increasingly the reason that people in urban or suburban neighborhoods are now raising backyard or urban chickens.

In 2010, more than 500 million eggs were recalled when two large egg producers were linked to salmonella-related illnesses in 1,500 people. Wilson and his wife, Lindsey Wilson, were concerned about factory farming practices and routinely shop at their local farmer’s market even before they owned chickens. Wilson explains that his job as a software engineer parallels his passion for gardening and chicken-keeping. “A lot of us [engineers] are interested in understanding food stuff. I think it comes from the fact that being a computer programmer, in order to build anything, you really have to understand what we call the “whole stack.” A lot of us are interested in the fact that our food supply is so awful that if we really want to be healthy, we really have to start thinking downward.” Another chicken raiser, Melissa Bencivengo of North Olmsted, also cites her family’s health as the primary reason to raise chickens. A mom to two young daughters and also an engineer, Bencivengo watched her friend’s daughter start puberty at age 9 and decided that she wanted more control of her food supply. “My grandparents had a farm and they had cows, horses, chickens, and turkeys. So, I said you know what, chicken farming is something that I know that I can do.”

From suburban towns to urban centers, chicken coops are appearing everywhere in residential backyards. Cleveland has allowed chickens in residential backyards with some restrictions since 2009. Toledo requires a health inspection for backyard chickens but allowed them for several years. Wilson repeatedly wrote to the Cleveland Heights City Council asking them to approve backyard chickens and was elated when the City Council finally passed a series of green zoning ordinances in May 2012.  Despite this lag in approving urban chickens, the Cleveland Heights green zoning ordinances in 2012 was so comprehensive that it allowed conditional use permits for everything from renewable energy generators, rain water barrels, front-yard gardens, and backyard chicken coops in residential districts. To get a conditional use permit for chickens, a Cleveland Heights resident must submit an application that includes detailed descriptions and scale drawings of the project and appear before the planning commission. Once approved, a conditional permit allows up to four egg-laying hens for the resident’s own use. 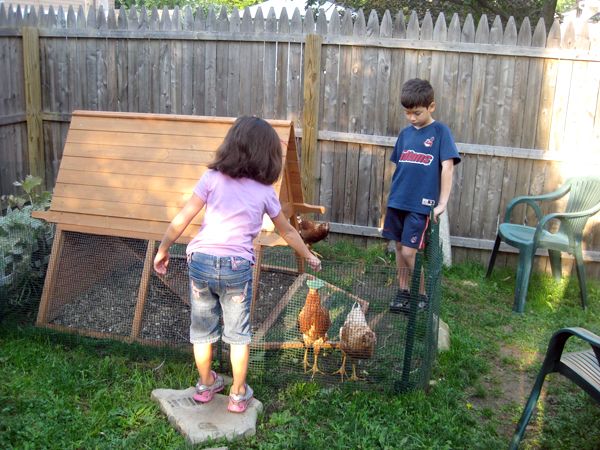 Cleveland Heights City Planner Kara O’Donnell says the trend in her city is that “younger families, with younger children, or younger singles” apply for the chicken permits and the Wilsons are a prime example. Wilson thinks it is worth the effort to teach his kids the relationship between raising chickens and their food supply. Only a couple hours of work per week are required to feed and water the hens, which lay an average of 12-18 eggs per week, and clean the coop. Wilson tasked his oldest son, Charlie, age 7, to guard the chickens from hawks and collect eggs daily, which Charlie describes as “actually very fun.” Lindsey Wilson shares why she raises chickens: “I wanted [my kids] to know how to take care of the animals. That they require us to take care of them.” Bencivengo is also teaching her kids something similar: “I want my kids to understand that food comes from somewhere other than the grocery store, in a package.”

O’Donnell says that Cleveland Heights has been successful at keeping neighbors of the chicken owners happy through the conditions set in the permitting process. Only one complaint has been lodged against any chicken keeper and this offense involved owners that had accidentally bought roosters, which are not allowed because they are noisy and potentially aggressive. The roosters were safely re-homed and the neighbors were satisfied. Lindsey Wilson initially worried about her neighbors’ reactions to their new chickens. She says, “We thought that we had to hide them from our neighbors but everybody just loves to watch them and [the neighbors] said really nice things for Matt at the Planning Commission meeting. They’re actually pretty quiet.”

The experience of Cleveland Heights mirrors the rising trend in chicken keeping across the country. Since 2009, Meyer Hatchery, an Ohio-based, nation-wide supplier of live poultry, has seen the doubling of the number of small chicken orders, which are usually between 3-14 live chicks and placed by urban or suburban residents. Jess Brushaber, Marketing and Advertising Director of Meyer Hatchery, says, “We have seen a significant increase in backyard chicken keeping which we attribute to folks wanting to live more sustainably. With cities making it legal to own a few backyard hens, jumping into the hobby is relatively inexpensive and easy.”

In fact, the Cleveland Heights chicken ordinance is clear and straightforward. A resident is required to keep the chickens in the backyard; the chicken coop and run has to be 10 feet from the house and property lines; and the chickens and the yard have to be kept clean and sanitary. Even with these regulations, Wilson would like to see Cleveland Heights focus more on animal welfare and training for new chicken keepers. He says that the number of allowable birds is important but so is the space per bird and an educated owner who knows how to maintain them. 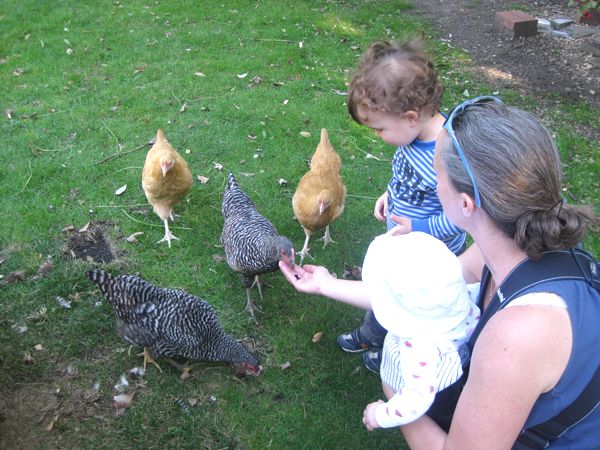 Matthew Wilson thinks it is worth the effort to teach his kids the relationship between raising chickens and their food supply. Photo courtesy of Kara O’Donnell, City of Cleveland Heights

Wilson taught himself the skills to raise urban chickens through sources like Backyard Poultry Magazine, community websites such as backyardchickens.com and reddit.com/r/BackYardChickens, and by learning from friends with chicken experience. Wilson’s free-range chickens and chicken coop are largely odor-free and he invites people to take a whiff of his chicken coop to judge for themselves. He uses aerobic decomposition of his chicken manure by mixing it with straw and pine shavings to create rich compost for his garden. The compost smells vaguely vinegary but only from a distance of a couple feet. Lindsey Wilson says that she was initially against the idea when Matt mentioned raising chickens. “I initially thought they are dirty and they probably smell. I had had no past history with chickens. [But] I’ve really fallen in love with them. It’s kinda cute to watch them follow [Matt] around.”

Wilson shares a story about Lindsey Wilson’s grandparents when they lived on the West Side of Cleveland. Lindsey’s grandfather was attending an important meeting when her grandmother called. She asked that he come to the phone immediately because it was a family emergency. In truth, her grandmother had called her grandfather because she wanted to share some exciting news with him. She told him that one of their chickens had laid their first egg for them! Wilson smiles as he can relate to the wonder and excitement over each new egg. He says of his chickens, “So far it’s been nothing but good things. They’re wonderful. They’re an asset.”

Jayne C. Severson is a sustainability and technical writer in Cleveland, Ohio. She volunteers for 350.org and the Sierra Club and works toward fighting global warming.