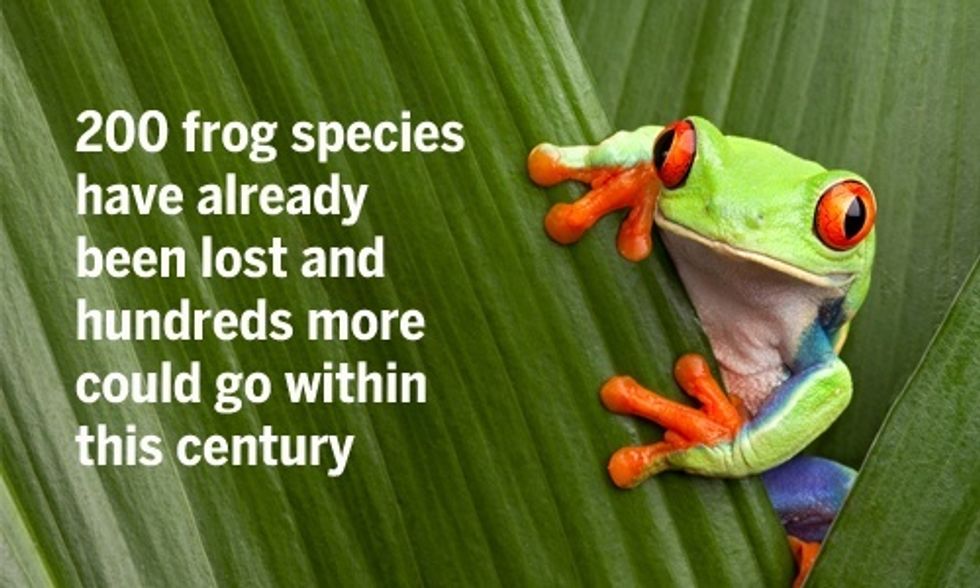 Things aren't looking good for reptiles and amphibians lately, especially frogs. John Alroy at Macquarie University in Australia published a study last month examining recent extinctions for the two groups of animals, and the results are alarming. "About 200 frog extinctions have occurred and hundreds more [frog species] will be lost over the next century, so we are on pace to create a mass extinction," according to the study.

"It is hard to know how many species have gone extinct so far because it is difficult to prove that something not seen recently is really gone forever," says the paper's summary. Alroy was inspired to conduct the study because he couldn't find any research on the total number of species that have gone extinct. But by using what he calls a "new, highly conservative statistical method," he was able to infer the number of extinct amphibian and reptile species across the world.

Alroy chose to study reptiles and amphibians partly because "there was a large amount of global data available for these groups, and partly because of a growing concern in the scientific community over the health of frog populations, which are thought to be in a state of decline in many places," says the Washington Post.

Alroy also looked at salamanders, snakes and lizards, but "he found that frogs seemed to be the most vulnerable to extinction—the results suggested that more than 3 percent of all frog species have disappeared, largely since the 1970s," according to the Washington Post.

The findings are especially alarming because the research method known as a Bayesian approach is "highly conservative," meaning that the estimated number of past and future frog extinctions could, in fact, be even higher.

"Consistent with previous results, frog losses are heavy in Latin America, which has been greatly affected by the pathogenic chytrid fungus Batrachochytrium dendrobatidis," says the paper. "Extinction rates are now four orders-of-magnitude higher than background, and at least another 6.9 percent of all frog species may be lost within the next century, even if there is no acceleration in the growth of environmental threats." That means that reptiles and amphibians are going extinct at 10,000 times the rate of other organisms.

“Thus, the data suggest that a runaway train of extinction is now likely to produce what would be seen as a global mass extinction on the ultimately more important landscape of geological time,” Alroy writes in the paper. It's not surprising that frogs are especially vulnerable, though. “They’re seen as a ‘canary in the coal mine’ group because they seem to suffer large population losses more easily than other groups,” Alroy said. “What was surprising was the geographic pattern of frog extinctions.”

Many have documented the frog losses in Central America, but Alroy found large losses in places such as Brazil, Madagascar and New Guinea—“places where there are not well-documented population losses due to anything,” Alroy said. “I think there are mass extinctions happening in the tropics that are largely undocumented.”

As for what's causing the mass extinctions, Alroy cautions against pointing the finger solely at climate change. “There’s a tendency in the literature to focus very strongly on the potential future impacts of climate change, specifically,” Alroy said. And while climate change is likely to be an important factor in the coming years, “this paper suggests that in the absence of really severe climate change we’ve already seen the beginning of a major mass extinction.”

“I’m not saying we should stop looking at climate change,” he added. “I’m saying there should be additional focus on other causal factors like habitat destruction and invasive species in particular. So I’m hoping this paper will encourage more research of that kind.”

Can We Make Our Masks Fully Eco-Friendly?