60,000-Strong Fridays for Future Protest in Hamburg, Germany Prompts Question: ‘Where Are You, USA?’ 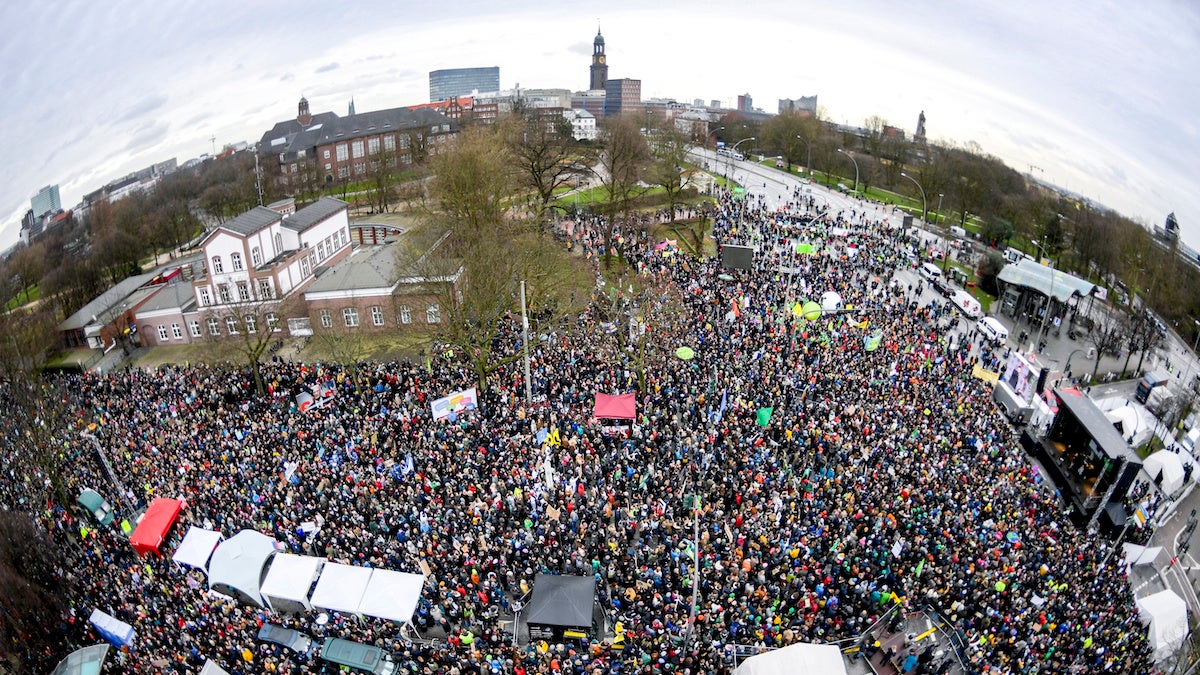 Among those taking part in the large Fridays for Future action in the northern German city was school strike for climate founder Greta Thunberg of Sweden.

Fridays for Future organizer Alexandria Villaseñor of New York City shared Thunberg’s tweet showing the massive crowd and asked, “Where are you USA?”

Where are you USA😭 https://t.co/TM54wYpZLc

“The United States needs these types of numbers on a regular basis,” said Jerome Foster II, a high school senior and Fridays for Future organizer in Washington, DC.

“What is it going to take for the U.S. to rise up like this?” wondered the Durham, N.C. branch of Extinction Rebellion. “We are in a climate catastrophe and people around the world, particularly in the global south are facing the brunt NOW! January 2020 was the warmest since we’ve recorded temperatures.”

Thunberg, who’s in her 79th week of Fridays for Future actions, noted in her remarks to the Hamburg crowd that the weekly actions have spread globally.

“For almost one and half years young people have been striking from school all over the world,” she said.

“The world is failing on ensuring us a future. And I honestly don’t understand how the people in power can continue like now. How they can look their children in the eyes while they are stealing their future?” she asked.

“We are facing an existential crisis,” said Thunberg, “but we must keep on pushing.”

While the Hamburg march drew attention for its size Friday, other youth-led climate actions took place in communities across the globe, which many documented on social media:

The youth of Kenema have joined us to fight for the climate. They are adding adding their voices in demand for urgent #ClimateAction Now. @GretaThunberg @IsataRoseline @Fridays4future pic.twitter.com/TGaQe8ShbG

Week 6 of the climate boycott! We sat through the blazing heat and the lightening today. But no big change happened without sacrifice.

Danish activists marching to the Ministry of Foreign Affairs to demand #ClimateAction now. Denmark needs to get a grip and contribute to #ClimateJustice worldwide #FridaysForFuture @GretaThunberg pic.twitter.com/2btnLYOcKv

Villaseñor, in a Friday tweet sharing the climate action she spearheaded in New York, underscored her steadfastness in her demand for urgent and bold action to tackle the ecological crisis.

“It’s cold, we’re tired, and we’re not stopping,” she wrote.

WEEK 63 #ClimateStrike at the @UN – and then at NYC City Hall! Today I was joined by @MarielS1115 from @Montessori_MUN and again by @JacobHB2005. Then we met up with @F4F_NYC. It's cold, we're tired, and we're not stopping. pic.twitter.com/keGD57RNxr