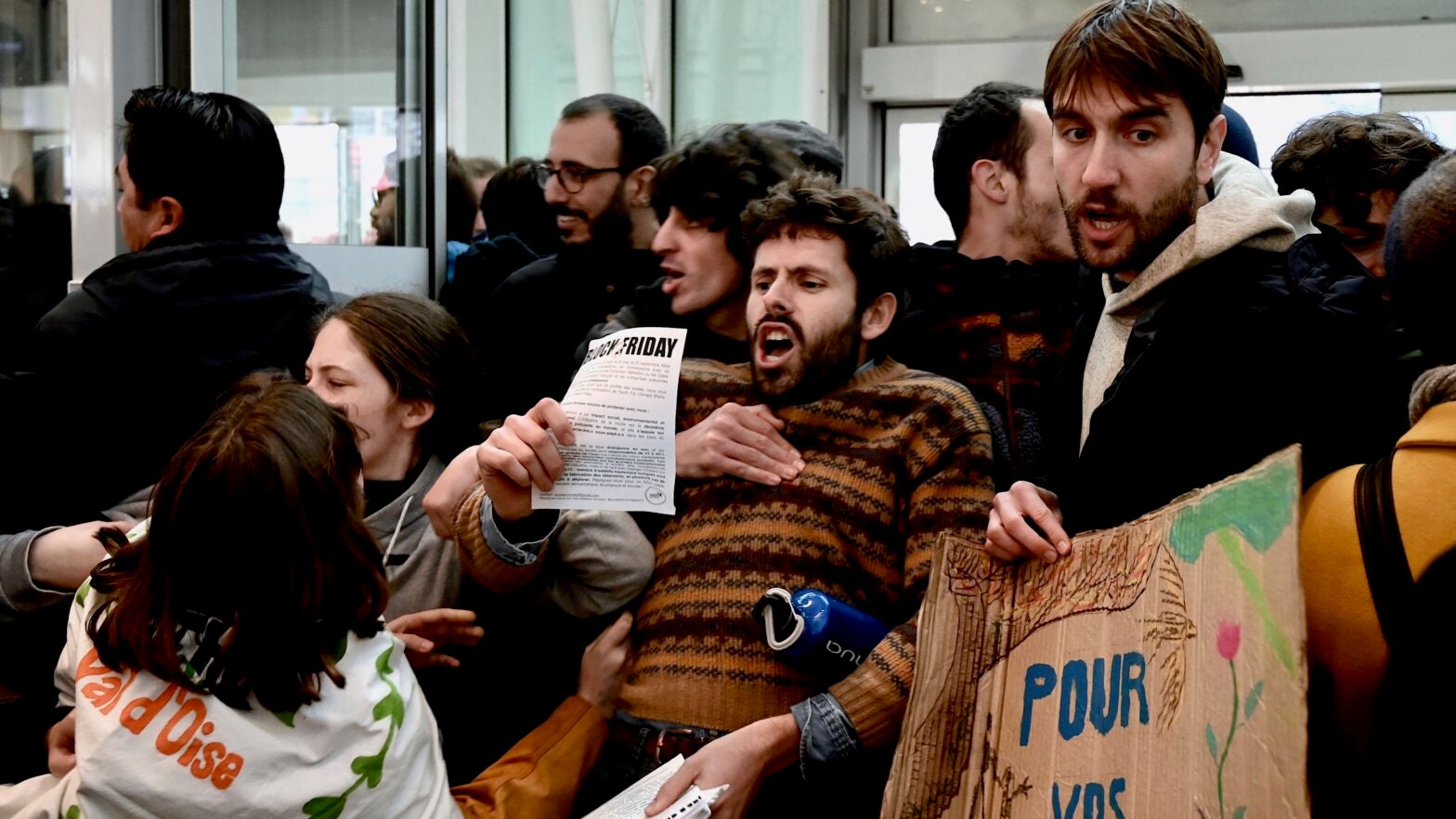 "Youth for climate" activists who are blocking the access doors to the Quatre Temps mall at La Defense business district, west of Paris on Nov. 29, are pushed by customers who are attempting to enter the mall as activists demonstrate against Black Friday. PHILIPPE LOPEZ / AFP / Getty Images

Despite its association with the U.S. holiday Thanksgiving, Black Friday has spread to shoppers and stores around the world. Now, some French lawmakers are trying to stop that.

A French legislative committee passed an amendment Monday that would ban the shopping day because it encourages “resource waste” and “overconsumption,” The Associated Press reported.

The amendment specifically targets Black Friday advertising campaigns and would be added to France’s “anti-waste law,” according to Euronews.

“‘Black Friday’ is a vast glory operation of consumerism imported from the United States in 2013,” the amendment summary begins. It goes on to condemn the day for its “disastrous environmental record,” according to Euronews.

The amendment was proposed by former French environment minister Delphine Batho and will be debated by France’s lower legislative house next month, The Independent reported.

Lawmakers aren’t the only ones in the country who oppose the day. Both government officials and concerned citizens have said that it contributes to the climate crisis.

Ecological transition minister Elisabeth Borne said on Thursday that the day caused “traffic jams, pollution, and gas emissions,” according to The Associated Press.

“We cannot both reduce greenhouse gas emissions and call for a consumer frenzy. Above all, we must consume better,” she told BFM Business, as The Independent reported.

Activists on the ground have also taken action against Black Friday. Members of the environmental group Amis de la Terre (Friends of the Earth) blocked the driveway of an Amazon warehouse south of Paris Thursday, The Associated Press reported. Demonstrators filled the driveway with hay and old refrigerators and microwaves and carried signs saying “Amazon: For the climate, for jobs, stop expansion, stop over-production!”

Additional protests are planned for the day itself under the banner of “Block Friday.”

France’s e-commerce union came out against the proposed ban, according to The Independent, but not all French businesses support Black Friday.

In fact, more than 300 mostly-French clothing companies actively called on their customers to boycott the day this year with a “Make Friday Green Again” campaign.

French lawmakers also argue that the day misleads customers into thinking that it offers greater discounts than the two sales periods mandated by French law, which take place for six weeks in winter and six weeks in summer, according to Euronews. In fact, the discounts offered on Black Friday are not comparable to those offered during the traditional sales periods.