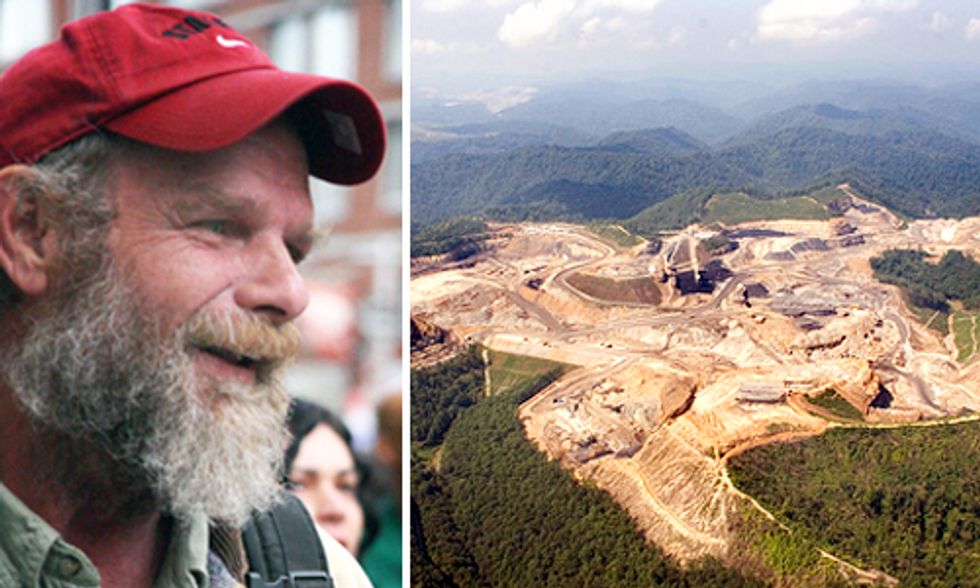 Nearly four years ago, long-time environmental activist and Kentucky-native Mike Roselle sat in the Southern Regional Jail in Beaver, West Virginia, with one simple message: Mountaintop removal mining, the most egregious human rights and environmental violation tolerated in our nation, must be abolished, not regulated.

A couple of days ago—four years after governmental inaction and continual mountaintop removal have left his adopted Appalachian region in ruin, blanketed ailing communities with toxic silica dust and sullied the headwaters of the eastern states' waterways, Roselle spent Thanksgiving in the Regional Jail in Charleston, West Virginia with a simple question: Why won't West Virginia Gov. Earl Tomblin simply have his state department's do their jobs and test the blasting dust for harmful toxins?

Roselle's arrest outside the governor's mansion is one of the most blatant attacks on freedom of speech and on our democracy—and a challenge to all citizens and environmental groups and the Obama administration to either have a Kennedy moment and intervene on behalf of the civil rights of citizens in a rogue state or allow the mounting death toll and health crisis from mountaintop removal to grow in the face of a silent tsunami.

His one-line statement at the governor's mansion is a powerful call to the nation: "I am not going to take that dust back to Rock Creek."

Will Gov. Tomblin be held accountable for this fiasco?

"Ask him why is it that he doesn't want to simply analyze this dust," said Goldman Prize winner and Ohio Valley Environmental Coalition community organizer Maria Gunnoe. "Why put a man in jail because he delivered the toxic dust and ask to have it analyzed?"

Or, have the rest of us abandoned Appalachia?

As I have written for years, Appalachia has not cornered the market on the ravages of the extraction industries: my own southern Illinois is currently besieged by one of the most devastating coal mining rushes and incoming fracking attacks in decades; the western ranges of the Dine (Navajo) and Montana and Wyoming communities continue to be plundered; frac sand mining is leveling the hills of Aldo Leopold's own "Sand County" in Wisconsin. Strip-mining takes place in nearly 25 states.

But the nearly half-century tragedy of mountaintop removal in Appalachia, sanctioned by a compromise in the 1970s, is so outrageously devastating and unnecessary that it presents an undeniable truth to anyone who is concerned about the fate of our planet today: If we can't stop mountaintop removal mining, which provides less than 4-6 percent of our national coal production, we will never be able to make the necessary steps to transition to clean energy and deal with the climate crisis.

Need evidence? There are more than 20-plus peer-reviewed studies on the health and environmental toll of mountaintop removal.

The first two steps are clear: We must pass the Appalachian Communities Health Emergency Act (ACHE), a federal bill that calls for a moratorium on mountaintop removal until proper health assessments are made; and secondly, we have a moral obligation to pass a Coalfields Regeneration Fund, to provide funds to jump start clean energy manufacturing and development for unemployed miners and ravaged communities that provided so much energy to our last century.

Appalachia, like the Mississippi River and the tars sands pipeline and so many other burning grounds, is truly climate ground zero.

Four years ago, after an extraordinary movement of local and national citizens groups took on the challenge of mountaintop removal, I asked the question:

Are we simply going to sit back in our offices and homes in acts of good behavior and allow the Obama administration to stammer in indecision, clearly without a roadmap to end mountaintop removal, as millions of pounds of ANFO explosives are detonated daily in Appalachia, including Coal River Mountain, while the largest forced removal of besieged American citizens takes place under violation-ridden acts of assault, thousands of acres of hardwood forests are wiped out, and American watersheds and waterways are jammed with toxic coal mining waste?

Where are the national environmental and climate organizations today?

Have we abandoned Appalachia?

Have we turned our backs on our promises and the inspiring legacies of American heroes like Judy Bonds and Larry Gibson?

Writing about a similar conflict between the plunder of outside corporations and the self-defense efforts of local communities in India, Arundhati Roy captured the essence of Roselle's protest—and the inspiring and courageous efforts of Idle No More, the Shawnee resistance movement in southern Illinois, and the growing ranks of community rights advocates:

If there is any hope for the world at all, it does not live in climate-change conference rooms or in cities with tall buildings. It lives low down on the ground, with its arms around the people who go to battle every day to protect their forests, their mountains and their rivers because they know that the forests, the mountains and the rivers protect them.

For more information on how to support Roselle, donate to his legal defense fund, check out his Climate Ground Zero website.

For more information on the ACHE Act, check out their website.