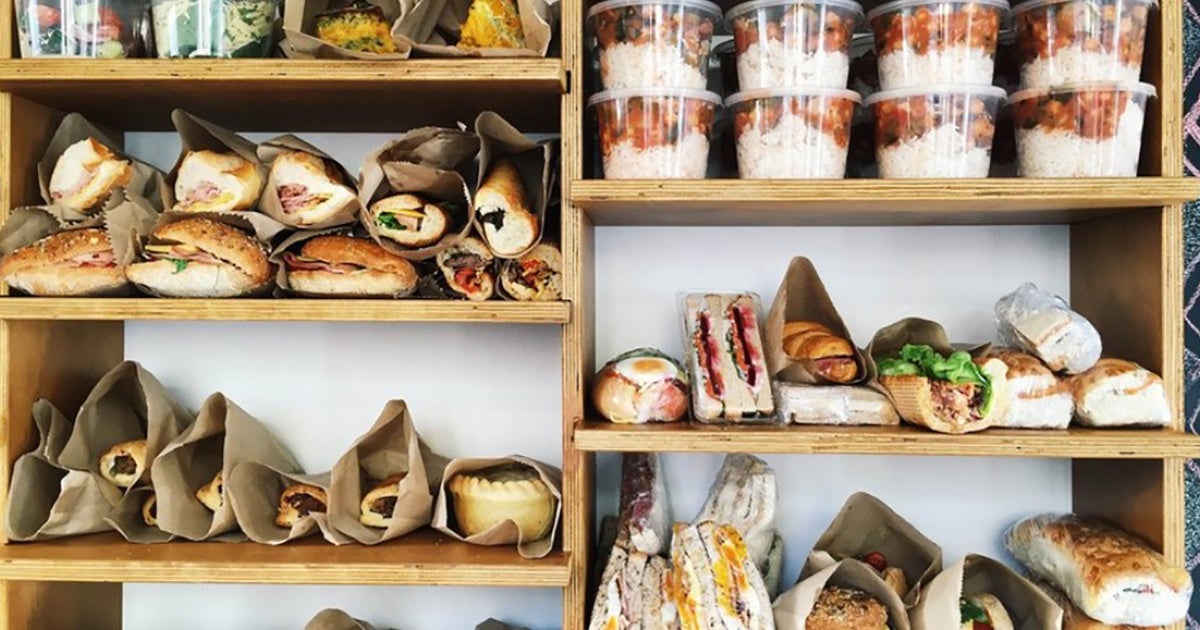 On a windy late afternoon, dozens of people have lined up in front of a 20-foot-long repurposed shipping container situated on a church parking lot. Inside, volunteers are unloading food items from custom-built shopping carts and stacking them onto rows of shelves. There are hearty rice meals and healthy salads, thick sandwiches, pies and other savory and sweet items. This is just another busy day for The Free Store.

The Free Store is a nonprofit organization that redistributes surplus food from local businesses in New Zealand’s capital city, Wellington, to those in need. It was inspired by a two-week art project in 2010 where artist Kim Paton filled a shop with surplus food items from bakeries and supermarkets. Anyone visiting the shop could take what they wanted free of charge.

“I heard that some of the food in the shop was from cafés,” said Benjamin Johnson, 28, co-founder and director of The Free Store. “It was food left over at the end of the day that was still in a good state. Imagine if there’s more food from cafés and restaurants in the city that is good to eat but is just being thrown away. We could do something about that.”

“We saw the potential in an untapped food supply. You had food that was perfectly good to eat, and then you had people that were hungry. We could facilitate a connection between the two,” Johnson said. Taking the art project as inspiration, Johnson and a group of friends decided in November 2010 to transform The Free Store model into a long-term sustainable community initiative.

People lining up for food at The Free Store.Benjamin Johnson

The Free Store currently has 65 suppliers around the city center—cafés, restaurants, bakeries and catering companies donating food they are unable to sell by the end of the day. The local Neo Café & Eatery has been donating scones, muffins and other unsold baked items to the store for more than three years. Before partnering with The Free Store, the café either gave its leftover food to staff members or threw it in the trash.

Johnson said that they are redistributing an estimated 800 to 1,500 food items each weeknight, averaging about 250,000 food items a year. He estimates that’s worth a retail value of $1.45 million New Zealand dollars ($1.04 million U.S.).

These food items are handed out from 6 to 7 p.m. every weeknight to around 100 people from diverse backgrounds, including the homeless, unemployed, those with long-term health issues, immigrant and refugee families, students, and those who were recently released from prison.

“There are no conditions on who can come to The Free Store,” Johnson explained. “There are no criteria. Anybody can come for whatever reason and take whatever they want.”

More than a solution just to curb waste, The Free Store has grown into a community food source.

Before volunteering for The Free Store, 53-year-old Vincent Tito was lining up for food. “I was in debt. I was not eating properly, and my body was getting weak,” he said. He regained strength through the greens and meat he got from The Free Store. But he didn’t want to keep receiving—he also wanted to give. He volunteered to make coffee for customers waiting for the store to open and has been The Free Store’s coffee manager for more than two years.

The Free Store has now spread to other regions within New Zealand. There are four stores across the country—all set in motion by the local communities themselves, adapting The Free Store model in their own ways. Operations rely on grants from foundations and trusts, donations, and volunteers. They also conduct fundraising events each year.

But the effort to reduce food wasteby redistributing surplus food is fast becoming a global movement. Similar initiatives are in place around the world: Food from the Heart in Singapore collects and redistributes unsold bread from bakeries; FoodBlessed in Lebanon turns unwanted food from supermarkets, farms, and food retailers into free meals; and in the U.S., Copia has created a mobile app to schedule pickups of surplus food, which is then delivered to local nonprofits.

Johnson believes that The Free Store concept can be replicated around the world. “All you need is a space to operate from, surplus food, people who need the food and will come and take it, volunteers, and a committed group of people who can actually do it,” he said. “There has to be local ownership. In every area where there’s a Free Store, there needs to be a deeply rooted community of people.”

What started as an art project has become a community lifeline.