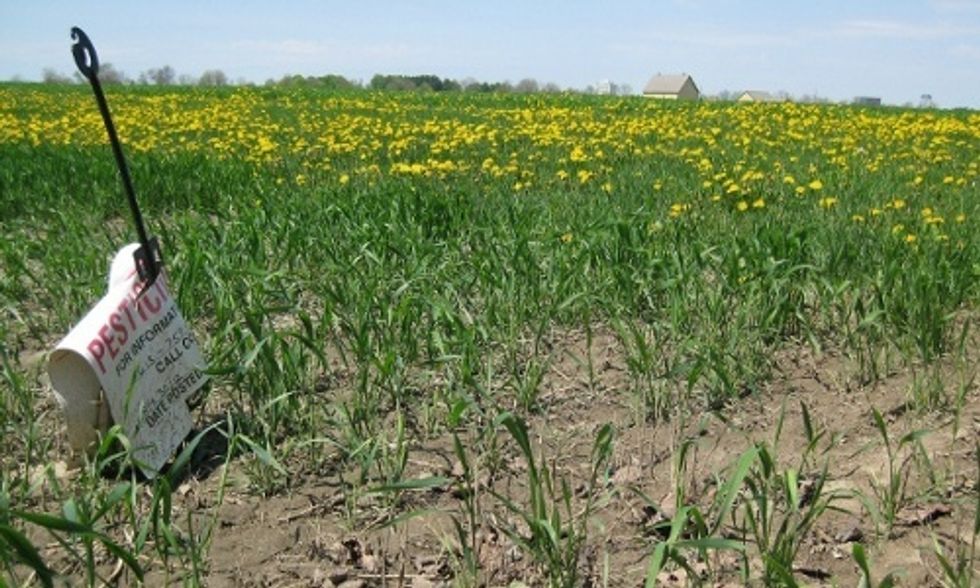 What's a GMO-promoting multinational chemical company to do? Word is getting out that, while the science isn't clear whether genetically modified crops (GMOs) themselves are harmful, the fact that they were created to be resistant to increasing amounts of pesticides such as glyphosate is a problem.

Monsanto, which manufactures the glyphosate weedkiller Roundup, reacted furiously to a report released earlier this year by the World Health Organization (WHO) that glyphosate likely causes cancer. The company demanded that WHO retract the report, repudiating the years of research by multiple scientists. With Roundup the most widely used and top-selling herbicide, Monsanto clearly has a bottom line to protect.

That bottom line has just taken another hit. In Europe, where people are far more suspicious of the extravagant claims and potential dangers of GMOs than in the U.S. and heavily regulates them, the French government has announced this week that it is restricting the sale of glyphosate weedkillers in garden centers.

"France must be on the offensive with regards to the banning of pesticides,” said ecology minister Ségolène Royal. “I have asked garden centers to stop putting Monsanto’s Roundup on sale."

Meanwhile, concern is growing in the U.S. about the use of glyphosate and the new Enlist Duo herbicide from Dow which combines glyphosate and 2,4-D to combat another problem stemming from glyphosate use: the rise of "superweeds" resistant to pesticides. "The U.S. Environmental Protection Agency (EPA) should heavily weigh the world’s leading cancer experts’ recent classification of glyphosate as the agency moves through its process to reregister this widely used herbicide," said Mary Ellen Kustin, senior analyst at the Environmental Working Group (EWG).

"In the U.S., most glyphosate is sprayed on farmland—roughly 280 million pounds annually. Blanketing genetically engineered crops with glyphosate accounts for the vast majority of the toxic herbicide’s agricultural use. But without requiring labels on GMO foods similar to labeling laws in France and 63 other countries around the world, the U.S. leaves its consumers confused as to whether or not they’re buying GMO foods," Kustin continued.

"The WHO is highly respected for protecting public health around the world, and it should move forward immediately to safeguard people from being harmed by glyphosate,” said Natural Resources Defense Council health program director Erik Olson. “At the same time, the WHO should make absolutely sure that its expert review panel is free of conflicts of interest so it can make science-based evaluations of herbicide and pesticide residues on food and advise what levels are safe for people to be exposed to.”

"Time and time again we have seen corporate interests influence major decisions affecting the health of consumers and the environment," said Food & Water Watch Executive Director Wenonah Hauter. "We will not stand by and watch WHO-IARC’s conclusion on glyphosate become watered down due to the presence of task force members tied to major biotech firms. Farmers, farmworkers and communities who live and work near farms sprayed with glyphosate are depending on a rigorous, independent review of this chemical and the WHO must provide it.”

Earlier this spring, a lobbyist had to eat his words (shall we say, drink his poison) on French television after claiming glyphosate was so safe, you could drink it. Watch what happens when he is offered the chance to drink some pesticides: