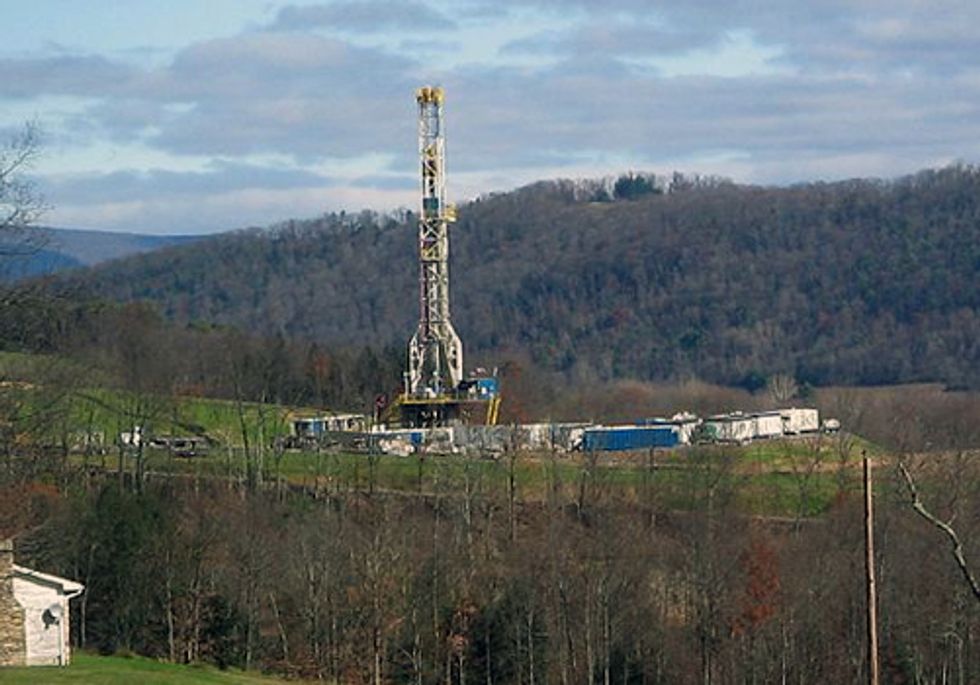 You know what natural gas smells like. Or do you? Natural gas is actually odorless. That rotten-egg smell is added for safety reasons. Otherwise, you might not notice a potentially deadly gas leak.

If only we could add a similar smell to the natural gas industry. Too many people—especially politicians—aren't paying attention to the dangers of the current "boom" in natural gas development. Here are three big reasons why we should stop new gas drilling before it starts and replace fossil fuels at every opportunity with clean, renewable energy.

It starts with how we get gas out of the ground. Hydraulic fracturing, or fracking, is problem number one. Frackers inject a toxic chemical cocktail underground under high pressure to fracture the rock and release the gas. A lot of that fluid comes back up the well as waste and, when it does, it's even more toxic than it started out.

People who live in areas where fracking is happening are outraged. They should be. What guarantee do they have that their drinking water won't be affected by fracking? None. How do they know that toxic wastewater from fracking will be disposed of in a way that ensures it won't contaminate aquifers ten, twenty or thirty years from now? They don't.

In fact, a ProPublica investigation has identified more than 1,000 cases of water contamination near drilling sites. The risks don't end when the drilling does, either. The question isn't whether abandoned wells and fracking-waste storage sites can leak, but how many will fail, and how soon it will happen. Yet, incredibly, fracking enjoys exemptions from parts of at least seven major national environmental statutes, including the Clean Air Act, the Clean Water Act and the Safe Drinking Water Act. The rush to frack for natural gas has occurred with maximum greed and minimum oversight.

The next time someone tries to tell you that fracking is safe, ask them why, then, the industry spends so much money getting exemptions to our nation's environmental laws. Ask why the gas industry won't fully disclose exactly what's in the billions of gallons of water they are pumping into wells across the country. Ask why the gas industry fights so hard to enforce gag rules on local hospitals so that doctors can't talk about what chemicals are poisoning gas-drilling communities.

The Sierra Club believes no community should be forced to accept the risks of fracking. That's why we're working with local activists to support moratoriums on fracking in New York, Illinois and eight other states, as well as the right of local communities, like Longmont and Fort Collins in Colorado, to declare fracking off-limits within their borders.

That work's paying off, too: The New York State Assembly just last week passed legislation that would extend the moratorium on high-volume hydraulic fracturing in the state until May 2015. That victory is a credit to the passionate advocacy of citizens throughout the state who refuse to accept the premise that New York's countryside must be sacrificed for the sake of dirty-fuel profits. Together, we've also won the first round of a legal challenge to Pennsylvania's ACT 13 legislation, which similarly gives communities control over their own fate.

Moratoriums are important because, as currently practiced, fracking simply can't be considered safe. Take what's happening in Illinois. The Sierra Club and many other grassroots groups are fighting hard to get a moratorium in place because the frackers have not proven the safety of their process. But because of massive gas-industry lobbying, we do not yet have sufficient political support. With no regulations in place, and the frackers lining up, our local chapter joined an effort to develop rules that would prevent the worst abuses of the gas industry. And at one level they were successful—the proposed Illinois rules tighten some of the loopholes found in other states. But here's the thing: Even these improvements do not fully protect the health and safety of the good people of Illinois. In fact, no proposed legislation in any state currently does.

Although problem number one is how we get gas out of the ground, problem number two happens far above ground—in our atmosphere. Natural gas boosters like to claim that it is a climate-friendly energy source, supposedly because it's not as dirty as other fossil fuels. That's like saying it's safer to be attacked with a knife than a gun. If you end up dead, it's a moot point.

It's true that gas doesn't directly create as much carbon pollution as coal when it's burned, but that reality hides a larger story. Natural gas is mostly methane, and methane is an extremely powerful climate-disrupting gas all on its own (more than twenty times more potent than carbon dioxide).

We know that during the drilling and transportation of natural gas, methane leaks, but nobody knows exactly how much, because no comprehensive studies have yet been conducted. The U.S. Environmental Protection Agency (EPA) has estimated that leakage rates are around 2.4 percent. However, a range of studies in recent years have called that figure into question. One of the most recent, from a National Oceanic and Atmospheric Administration research group, measured methane leakage from a Utah gas field (not even shale gas!) up to an astonishing nine percent, and that didn't even include leakage from distribution and transmission. Any leakage rate much greater than the EPA’s 2.4 percent would be enough to make gas worse than coal as a climate disruptor.

But even if drillers could magically eliminate all methane leakage, natural gas would still threaten our climate simply because there's so much of it. If we allow the industry to extract and burn all (or even most) of it, then we're looking at irreversible climate disruption. The International Energy Agency estimates that to have a shot at keeping global warming under 3.6°F (which is a risky target considering the damage we've already incurred with a little more than 1°F of warming), we need to keep two-thirds of our known oil, gas and coal reserves in the ground. That's all the reason we need to go "all-in" on clean energy.

And that points to one of the biggest secrets the gas industry is trying to keep—we don’t actually need all this fracked gas. Despite the industry's well-funded misinformation campaigns, the fact is that clean energy is already cheaper than dirty fuels in many places. At the retail level, installing solar on your home is cheaper than traditional utility power for many homes in 14 states. At the wholesale level, solar panel prices have dropped 80 percent in the past five years, and new solar projects are beating out new gas and coal in places like California and New Mexico. We installed more solar and wind energy last year in the U.S. than new gas, coal and nukes combined. Although clean energy is not yet cheaper than dirty fuels in every part of the country, solar and wind have a nice little side benefit: They don't destabilize our climate. Plus, the cost of clean power continues to drop, while the cost of fossil fuels goes up. We need to build on this progress, not undermine it.

That's going to be even tougher if we don't address problem number three—the burning desire of the industry to export U.S. natural gas to foreign markets in the form of liquefied natural gas (LNG). That would actually make both of the other two problems worse. Opening up more foreign markets to U.S. natural gas would lock us into long-term contracts that will require us to keep on fracking, regardless of how quickly we move to clean energy at home. And owing to the cooling and pressurizing that are required to make LNG, it would also compound the carbon pollution from natural gas.

Although LNG exports would boost the profits of natural gas producers, they would also mean higher energy prices for American consumers and industries and serious problems for our climate. That's why the Sierra Club Beyond Gas campaign is aggressively challenging permits for new LNG export facilities. Like coal-export terminals, these projects are long-term carbon-pollution disasters waiting to happen.

Fracking, climate and LNG exports are three reasons why we want to keep natural gas in the ground as much as possible, but it's important to note that the Sierra Club is as committed to developing long-term clean-energy solutions as it is to opposing dirty-fuel problems. Instead of replacing one dirty fossil fuel with another, we can move to clean, renewable energy sources like wind, solar and geothermal. Together with upgrading our energy efficiency, that's what can free us from fossil fuels. We've already seen tremendous progress in the past four years, thanks to renewable energy standards, falling prices for solar and wind, innovative financing and (early in its first term) critical clean energy support from the Obama administration.

We need to maintain this clean-energy momentum. It's the only way we'll ever achieve "escape velocity" from the fossil fuel planet we've been stuck on for two hundred years. But the "get richer quicker" mentality behind the natural gas boom is trying to slow us down and drag us back to a world that runs almost entirely on dirty fuels.

What's that smell? It's not natural gas—it's greed.