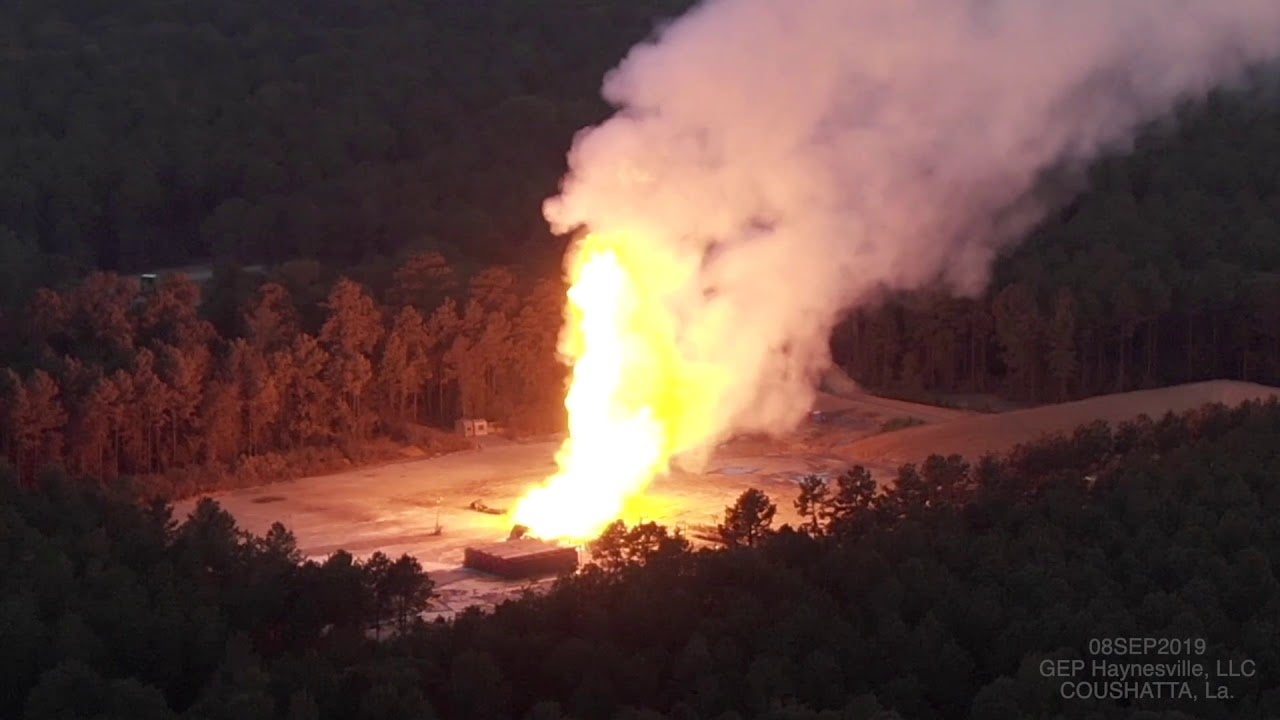 A fracked natural gas well in northwest Louisiana has been burning for two weeks after suffering a blowout. A state official said the fire will likely burn for the next month before the flames can be brought under control by drilling a relief well.

DeSmog obtained drone video footage shot 13 days after the blowout, which occurred early in the morning on August 30, the day after the well was hydraulically fractured. A tower of flames reportedly shot into the air that could be seen from more than 30 miles away. While the flames are no longer as intense, the fire is still visible from a distance of more than a mile. GEP Haynesville, LLC, the well’s operator, told local ABC affiliate KPVI that the fire started during flow-back operations, but the exact cause has not been determined yet.

Experts have voiced concerns over the pollution being released, especially given the length of time this fossil fuel well has been leaking and burning.

“Blowouts are (unintended) large, uncontrolled pollutant sources with potentially significant health and environmental consequences,” Gunnar W. Schade, an atmospheric scientist at Texas A&M University, told me via email after viewing the drone video obtained by DeSmog. “Blowouts need to be shut down as soon as possible.”

“The gas is under pressure so if they lose control, the gas, frack fluid, produced water, and oil/condensate all blast out of the hole,” Wilson said during a call after viewing the video. “They have to get specialized teams to come shut the well in.”

The Louisiana Department of Environmental Quality (LDEQ) has determined that the blowout and fire present no major air quality concerns. “LDEQ responders consider this a very low-impact event,” Greg Langley, LDEQ spokesperson, said via email. “The well is clean, it’s gas and what is being released is being consumed in the fire.”

“LDEQ is receiving daily air monitoring results from the environmental response contractor hired by the well owner,” Langley explained. “The company set up four air monitors to test for sulfur dioxide, hydrogen sulfide, volatile organic compounds, and lower explosive limit. LDEQ also does periodic air monitoring with our own equipment. All meter readings have been below detection limits.”

Most of the air monitoring is being done with a chemical detector called MultiRAEs, according to Langley. When asked which volatile organic compounds, a class of air pollutants that includes the carcinogen benzene, were present, Langley replied, “Nothing was detected.”

“It’s laughable that they say there are no air impacts from this event,” Wilson said. She frequently monitors oil and gas industry sites with an optical gas imaging camera that detects leaking methane and other pollutants invisible to the naked eye. Wilson’s videos have been instrumental in identifying numerous leaking wells in various shale regions across the United States, including Louisiana’s Haynesville Shale, where this blowout is burning. Wilson reports her findings to state regulatory agencies, which on occasion have fined operators for the leaks she flagged.

“Even without my optical gas imaging camera, I know there are air impacts because I can see them with my naked eyes. You can see that the gas coming up is not all being burned off and the plume of smoke and gases is traveling a very far distance,” Wilson said, based on the drone footage.

Wilson recommends placing air sampling equipment on a drone to survey the area above the fire and leaking well.

“The problem is the plume is up much higher than an LDEQ inspector standing on the ground holding a MultiRae meter,” she said.

Wilma Subra, a technical advisor for the Louisiana Environmental Action Network, agrees that using drones would be advisable and that air canister testing should be done too. This latter approach captures air samples over a period of days and measures how much of each compound is present. Subra thinks air canister testing is the best way to know if the emissions around the blowout are a threat to human health.

Like LDEQ, these two agencies concluded the accident did not warrant alerting nearby residents of potential health concerns. A few people live within a mile and a half of the site.

“Any time there is a loss of well control, there is a concern about environmental impacts,” Patrick Courreges, communications director for LDNR, told me. DNR’s “first concern is for the physical safety of the workers on site and for any people potentially affected in nearby homes and businesses,” but in this case the site is fairly remote and air monitoring, in place since the first day of the blowout, hasn’t indicated any potential immediate impacts of harmful gases, he explained.

“Currently, well control contractors are on site, under the supervision of the operator and State Police Incident Command to keep the impacts contained as much as possible, using water to help control the heat and potential spread of flame,” Courreges said. “While there is no good news in a blowout, the fire does actually help with lessening the impact of the escaping methane by burning much of it off, though obviously the goal is to get the flow of methane stopped and the fire out as soon as possible.”

“The longer-term solution is likely to be the drilling of wells to intercept the affected wellheads and stop the flow of gas in the damaged wellheads,” he told me. That might take a month. A design for a relief well has not been submitted yet to DNR, though one is being planned. Drilling a relief well was the same basic approach which ultimately stopped the flow of oil from BP’s Macondo well blowout deep under the Gulf of Mexico in 2010.

“Full-on blowouts in hydraulically fractured Haynesville Shale wells are rare,” Courreges said. “While there have been instances of valves or piping giving way over the years that required emergency response, I don’t recall any blowouts on this scale from those type of wells.”

Wilson is skeptical of that response. “We don’t know how common this is because the industry tries very hard to keep these events quiet,” Wilson said. “If they happen in a remote area, no one finds out. They are always downplayed and the regulators help with the deception.” She believes that “there has never been a system in place to adequately regulate this industry, so they are allowed to self-regulate by doing their own testing.”

“For decades we have endured these oil and gas disastrous accidents that have harmed health and pushed us into a climate crisis,” Wilson said, “but we don’t have to put up with this anymore because the technology to transition to clean renewable energy is available today and it’s cheaper. The only thing holding us back is the political will.”

Methane, the main component in natural gas, is a greenhouse gas that is up to 86 times more potent than carbon dioxide in the first 20 years after entering the atmosphere. A study organized by the Environmental Defense Fund (EDF) and published in June last year reports that the U.S. oil and gas supply chain is leaking roughly 60 percent more methane than previous Environmental Protection Agency (EPA) estimates, which largely relied on industry self-reports.

Wilson compared this blowout to the 2015 Aliso Canyon catastrophe in southern California and the 2018 XTO blowout in Ohio, which both gushed large amounts of methane. “This blowout is a huge deal,” Wilson said. “We are at the climate breaking point and no one can even say how much methane is blasting into the air.”

Schade told me that estimating the amount of pollutants released from the “flare” (the industry term for intentionally burning natural gas in oil fields) is possible by looking at data from the National Oceanic and Atmospheric Administration’s Visible Infrared Imaging Radiometer Suite (VIIRS). This source will show data about the flare detected by satellite, allowing the atmospheric scientist to calculate the estimated amount of heat and emissions.

After reviewing the satellite data available so far, Schade reported the heat generated from this burning Louisiana well is at least three times the magnitude of the largest flares in the Permian oil fields of neighboring Texas. According to his estimates, this burning well may be releasing approximately 8,700 pounds of nitrogen oxides, pollutants that lead to smog and acid rain, each day.

“The emissions from such a source can be enormous,” said Schade.