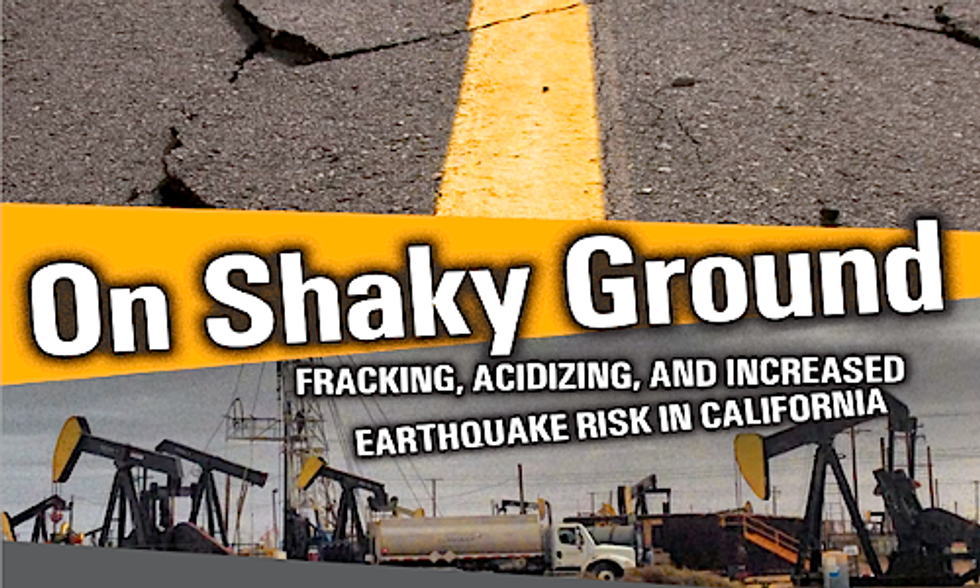 Oil companies are increasing California’s earthquake risk by injecting billions of gallons of oil and gas wastewater a year into hundreds of disposal wells near active faults around Los Angeles, Bakersfield and other major cities, according to a new report from Earthworks, the Center for Biological Diversity and Clean Water Action.

A boom in hydraulic fracturing—fracking—in California would worsen the danger of earthquakes, the report finds, by greatly increasing oil wastewater production and underground injection. Extracting the Monterey Shale’s oil could produce almost 9 trillion gallons of contaminated wastewater, the report estimates. That could expose California to a surge in damaging earthquakes like those seen in Oklahoma, Texas and other states experiencing rapidly increased fracking and wastewater production.

“This isn’t rocket science. We’ve known for decades that wastewater injection increases earthquake risk,” said report co-author Jhon Arbelaez of Earthworks’ Oil and Gas Accountability Project. “Since Gov. Brown resolutely refuses to learn from other communities’ experience with fracking across the country, our only option to protect California families is to prevent fracking altogether.”

State officials have not examined whether past earthquakes were triggered by fracking or disposal wells, and existing and proposed regulations do not adequately address the risk. Because of research and knowledge gaps and inadequate monitoring, state officials cannot protect Californians from induced quakes.

“An oil fracking boom in California could raise the risk of devastating earthquakes in some of our biggest cities,” said report coauthor Shaye Wolf, Ph.D., of the Center for Biological Diversity. “State officials are ignoring the problem, but as risky new oil production techniques spread, we could see trillions of gallons of wastewater shot into the ground near active faults. We need to nip this danger in the bud by halting fracking and acidizing.”

“The risk of seismic impacts is yet another illustration that the massive wastestream resulting from oil production threatens California's drinking water and public safety," said report coauthor Andrew Grinberg of Clean Water Action. "While threats to water, air and health have been well-documented, our emerging understanding of the risk of induced seismicity is yet another reason for a time-out on fracking. The findings in this report continue this troubling trend: the more we learn about California's oil industry, the more cause we find for alarm.”