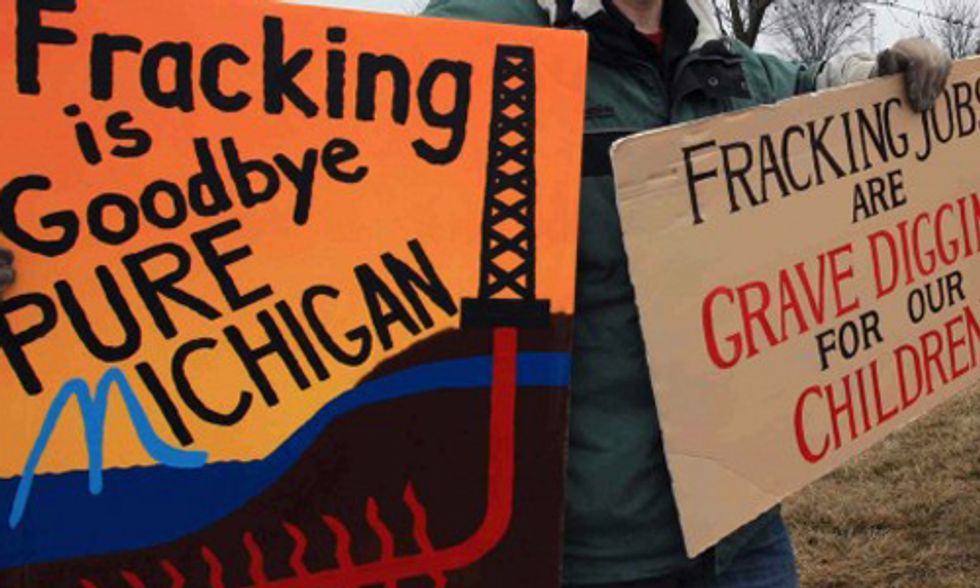 A poll taken by Public Policy Polling revealed this week that 65 percent of California residents oppose dumping fracking waste in the ocean. The actions of fracking companies in both the U.S. and England, the eagerness of many government bodies and officials to cater to them, and the obfuscation around the disposal of the waste show they have reason to be concerned.

12 tons of radioactive fracking waste is heading for a hazardous waste facility in the Detroit area from Pennsylvania. Photo credit: Ban Michigan Fracking

Ban Michigan Fracking reports that 12 tons of radioactive fracking waste is heading for a hazardous waste facility in the Detroit area from Pennsylvania. The facility, Wayne Disposal Inc., is one of only two in the country that accepts this waste (the other is in Idaho), which was already rejected by a West Virginia facility for its high level of radioactivity.

The lack of places to dump fracking waste is emerging as one of the industry's biggest problems. Recently, for the second time, the New Jersey legislature voted by an overwhelming bipartisan majority to prohibit the treatment, storing and disposal of fracking waste water in that state  And last week it was vetoed for the second time by Governor Chris Christie, angering environmentalists, as well as legislators.

One of the bill's sponsors, state senator Bob Gordon, released a statement that said, "The liquids used in fracking are toxic substances that are known to be hazardous to humans, and this legislation would have protected New Jersey residents from that danger. One of the main responsibilities of government is to protect its residents from harm, and today Gov. Chris Christie failed that test."

In England, where the government announced last month that half the country would be open to fracking, it's also approved the injection of a million and a half gallons of potentially radioactive water under the North Moors National Park, reports public interest investigative organization Spinwatch. Third Energy, which holds the rights to the oil field located under the park, is currently planning only conventional gas drilling. But the area is said to contain extensive stores of shale gas as well.

In England, the government approved the injection of a million and a half gallons of potentially radioactive water under the North Moors National Park. Photo credit: Spinwatch

The commercial success of the Ebberston Moor field depends on Third Energy being allowed to re-inject the potentially radioactive water that is produced with the gas back into what is known as the Sherwood Sandstone formation, which overlies the limestone where the gas will be extracted from. The sandstone lies 1400 metres below the ground. Notes of a meeting between Third Energy and the regulator involved, the Environment Agency, disclosed under the Freedom of Information Act (FOIA), reveals that "the success of the Ebberston Moor Field is dependent on the disposal of [produced] water to the Sherman Sandstone."

As in Michigan, there are unanswered questions surrounding the impact of fracking waste disposal. While Third Energy says the risk of contaminating drinking water is minimal, local anti-fracking activists have expressed concern about leakage, since the re-injection well would pass through aquifers that supply drinking water.

Activist Russell Scott points out at Frack Free Yorkshire that the proposed waste is equivalent to "a full sized Olympic swimming pool full of hazardous waste pumped down the well under high pressure every day for over nine years. " He says, "Third Energy’s suggestions that this process will not have any negative impacts on the integrity of the well casing protecting our drinking water from the injected waste is simply ridiculous."

With so much unclear about the safety of fracking waste and where it is ending up, citizen protests are becoming increasingly common. Illinois People's Action reports that 100 protestors from its organization and others showed up at an appearance by Governor Pat Quinn at the Illinois State Fair.

100 protestors showed up at an appearance by Governor Pat Quinn at the Illinois State Fair. Photo credit: Illinois People's Action

"The real tragedy here is that corporate greed could win out over the welfare of the people of Illinois," said IPA spokesman Bill Rau. "This is not about jobs for Illinoisians. This is about profit for oil and gas companies. The choice our elected officials are facing is whether they are going to stand with families and our environment as our Illinois Constitution says, or blindly support what oil and gas wants to do for its own profits. We're asking Governor Quinn, Whose side are you on?"

It's a question being asked in Michigan and New Jersey and England—and many other places—as well.