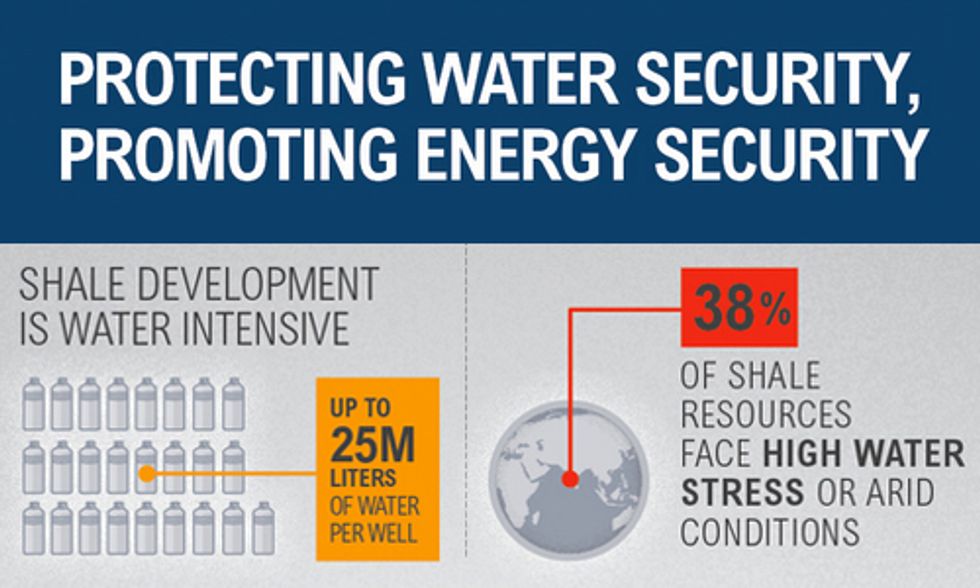 The vast quantities of water needed to release oil and gas by fracturing rock formations are not available in large areas with the richest deposits—posing major challenges to the future viability of fracking.

According to a report by the World Resources Institute (WRI), 38 percent of the areas where shale gas and oil is most abundant is arid or already under severe water stress—and the 386 million people living in these areas need all the spare water they can get.

Among the countries that have areas with potentially large quantities of shale underground, but which have limited water supplies, are China, India, Pakistan, South Africa, Mexico, U.S. and the UK.

The report says that estimates of shale gas reserves add 47 percent to the global, technically-recoverable natural gas reserves and 11 percent to the oil reserves. But it points out that that “as countries escalate their shale exploration, limited availability of fresh water could become a stumbling block.”

The method of releasing the trapped gas and oil in the process known as fracking is controversial because it involves injecting large quantities of water and chemicals underground to fracture the rock and release the oil and gas.

In some areas of the U.S., where fracking has been pioneered and has enabled large new supplies of oil and gas to be produced to the benefit of the economy, there has been trouble with the release of methane into the atmosphere and contamination of water supplies.

In many areas that have potential for fracking, this had led to a public backlash − even where there is plenty of potential water for use in the process.

An example is the Canadian province of Nova Scotia, where the Environment Minister, Andrew Younger, has imposed an indefinite ban on fracking onshore and plans to bring forward legislation to ban the practice.

“Nova Scotians have clearly indicated they are not yet ready for the use of hydraulic fracturing in the development of shale reserves,” Younger said. “We will respect their views.”

The WRI has produced a detailed map of shale oil and gas reserves, overlaid with colours indicating of areas high water stress. It illustrates where most conflict over the use of resources is likely to be.

The report comments on the problems facing companies and governments in persuading their citizens to sacrifice limited water supplies so that oil and gas can be extracted.

“The findings indicate that companies developing shale resources internationally are likely to face serious challenges to accessing fresh water in many parts of the world,” the report says.

“These challenges highlight a strong business case for strategic company engagement in sustainable water management at local and regional levels.

“They also point to a need for companies to work with governments and other sectors to minimise environmental impacts and water resources depletion.”