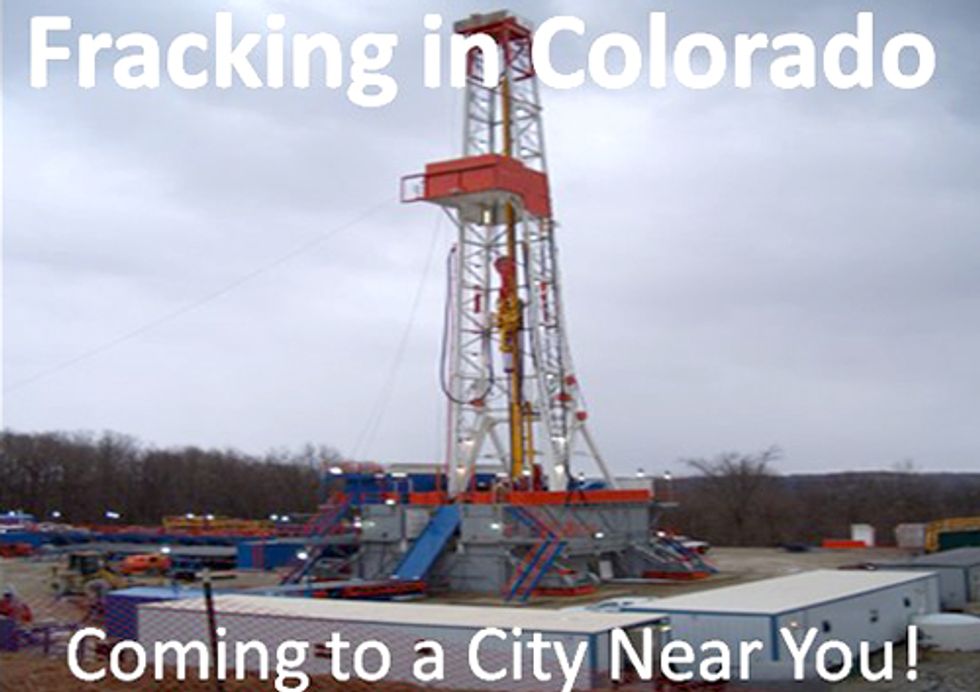 Remember the government's War On Drugs? Welcome now to the State of Colorado's War For Fracking.

A rational person would think that mainstream Coloradans—who make up the vast majority of our purple state—would prefer to keep cancer-healing activities nearby while keeping cancer-causing activities as far away as possible.

Not so much. In fact, the exact opposite is true.

Case in point is the town I live in, Fort Collins, which passed a ballot initiative to ban medical marijuana dispensaries in last fall's election. Quixotically, just a few weeks ago, Republican anti-environmentalists on the City Council successfully killed a short-term moratorium on fracking, even when a driller told the Council and the local newspaper he was ready to increase the number of wells on his oil field smack-dab in the middle of a residential neighborhood in the north end of town.

Let's look at the science.

One click on Google and you can find dozens of peer reviewed articles in medical and scientific journals about the use of marijuana in treating a variety of ills, including cancer. Those articles and ills are too numerous to list—many involving using marijuana to fight off cancer as a painkiller and appetite stimulant when combined with chemotherapy drugs. You can go directly to the American Cancer Society's website (cancer.org), which lists 32 peer-reviewed scientific articles about the use of marijuana in treating cancer.

And the same is true for fracking: One click on Google and you can find peer-reviewed articles in medical and scientific journals linking the chemicals used in fracking—Naphthalene, Formaldehyde, Thiourea, Benzyl chloride, Benzene, Acetaldehyde and the list goes on and on—to cancer. These chemicals are transported on fracking tanker trucks through residential neighborhoods, spilled near drill sites, injected into the ground and come back to the surface during and after the drilling and fracking process. Further, the drilling and fracking process releases those cancer-chemicals into the air—a now famous Colorado School of Public Health study indicated cancer causing chemicals can travel up to a ½ mile in the air to nearby homes and neighborhoods.

This war is being played out at the local government level across Colorado through zoning laws. The State of Colorado has given City Councils and County Commissioners the legal right to shut down every cancer-healing medical marijuana dispensary in their jurisdiction, while at the same time prohibiting local governments from shutting down (and shutting out) cancer-causing oil and gas drilling and fracking operations.

In fact, every time a local government tries to use its "home rule" authority to restrict fracking, the State of Colorado—under direct orders from Gov. Hickenlooper and his Department of Natural Resources (DNR) and attorney general officeholders—fires off a letter threatening to sue that local government. Stated differently, if your town or county tries to protect you from cancer-causing chemicals in drilling and fracking, Gov. Hickenlooper threatens to sue your town to make sure you are exposed to those cancer-causing chemicals.

In Fort Collins and across suburban Colorado, the oil and gas industry can drill and frack a new well just 350 feet from schools—that's roughly the length of a football field. If there's an existing or abandoned well that has had homes encroach around it, there are no setback requirements at all—that's right, zero feet. In fact, there could be an abandoned well on or near your property and you wouldn't even know it—the state does not even require that homebuyers get notified about the location of abandoned wells even though hundreds of abandoned wells are now being redrilled and fracked each year.

The prohibition against medical marijuana dispensaries in Fort Collins was led by local Republican activists who argued that school children were more likely to buy pot and get stoned as medical marijuana proliferated in store-front establishments. The concern is that kids on drugs make bad decisions that impact their health and society's welfare.

But I'm also really worried about our elected leaders making incredibly bad decisions that impact all of the public's health and society's welfare. Gov. Hickenlooper, his state regulators and his friends who run the oil and gas industry (who are helping to pay for his re-election, $83,191, so far...) are forcing Colorado's Front Range families, schools, neighborhoods and kids to get fracked.

So, who's getting high and making bad decisions?

It's common knowledge that the War On Drugs didn't work. But, Colorado's War For Fracking is working, unless Coloradans stand up, speak out and do something about it.