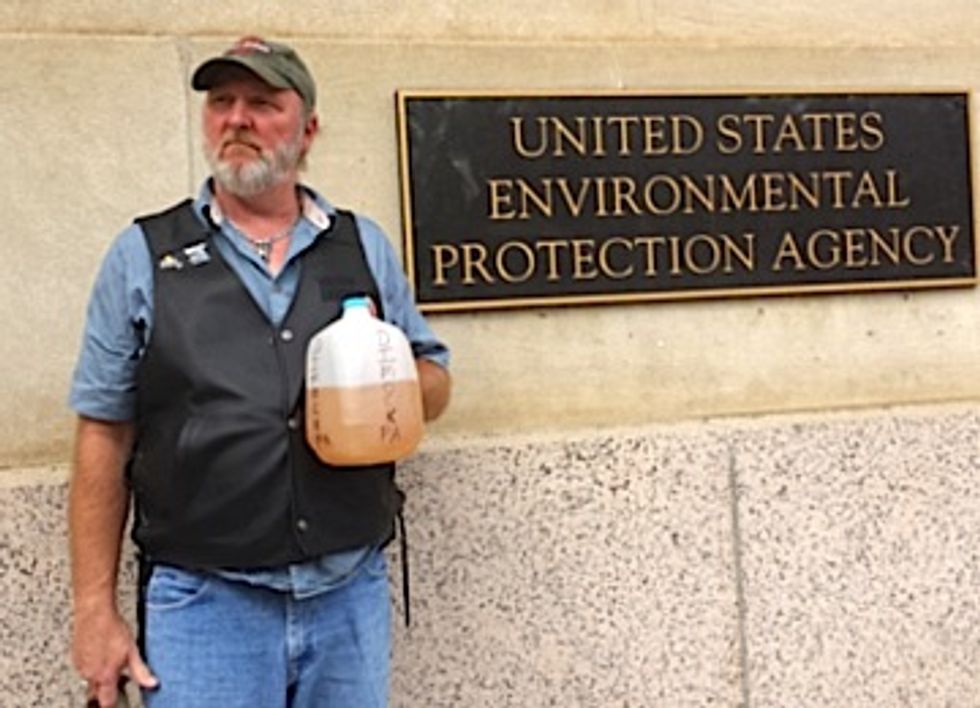 Residents personally harmed by gas drilling and fracking held a press conference in front of the White House yesterday and delivered 250,000 petition signatures from concerned citizens across the U.S. to Environmental Protection Agency (EPA) Administrator Gina McCarthy at EPA headquarters. The residents—including Ray Kemble from Pennsylvania, Steve Lipsky and Shelly Perdue from Texas and John Fenton from Wyoming—were all part of the EPA fracking investigations in their respective states that the EPA abandoned despite evidence of water contamination.

The petitions were collected by Stop the Frack Attack and Americans Against Fracking and its advisory committee member, actor Mark Ruffalo. The petitions demand that the U.S. EPA reopen investigations into fracking-related drinking water contamination in Pennsylvania, Texas and Wyoming and provide residents with safe drinking water in the interim.

"Today, I stand with affected community members from Dimock, PA, Pavilion, WY, and Parker County, TX, to call on President Obama and the EPA to re-open the investigations on the link between fracking and drinking water contamination,” said actor and advocate Mark Ruffalo. “The American people expect and deserve a transparent EPA that makes science-based decisions, free from political interference."

This event comes a month after Dimock, Pennsylvania resident Ray Kemble and Susquehanna County resident Craig Stevens delivered more than 50,000 petitions to the EPA asking it to reopen its investigation into the possible connection between gas drilling and water contamination in Dimock.

“Last month, we told EPA officials that we would be back in a month with more petitions,” said Craig Stevens. “Today, we are here to deliver five times our original number of petitions, and we stand here with affected community members from Pavilion,WY, and Parker County, TX, who have been through the same nightmare we have in Pennsylvania.”

“For years now, I have had to live with toxic, poisoned fracked water in my home,” added Ray Kemble, a former gas industry employee and an affected Dimock area resident, who was part of the EPA investigation. “When the EPA finally stepped in and tested my water, I thought ‘Thank God. Someone is finally here to help us.’ But then it became apparent to those of us on the ground that they were playing politics. EPA officials officially told us that our water was safe to drink but then told us off-the-record not to drink it. Now the truth is out and we want justice.”

In late 2010 in Parker County, TX, the EPA’s investigations led it to issue a rare emergency order because at least two homeowners were in immediate danger from a well saturated with flammable methane. More than a year later, the agency rescinded its mandate without explaining why. A subsequent Associated Press story reported that although the EPA had scientific evidence connecting the driller, Range Resources, with drinking water contamination, they changed course after political pressure from the company and its lobbyists.

“President Obama told us that we would only extract natural gas if it didn’t pollute our water,” said Steve Lipsky of Parker County, TX. “The EPA knows my water was polluted by fracking, their own investigator told them so. Now I have to truck in my drinking water. President Obama, you need to tell the EPA to reopen its investigations.”

“The purpose of the EPA is to protect us all from these types of health and safety hazards,” said Shelly Perdue, of Parker County, TX, whose water and air have also been contaminated with methane. “The methane at my house is 18 times the explosive level. It’s time for President Obama and Gina McCarthy to stand up for our communities.”

More recently, the EPA abandoned its fracking study  in Pavillion, WY, which found benzene, a known carcinogen, at 50 times the level that is considered safe. However, even with this evidence, the EPA handed its investigation over to the state of Wyoming, whose lead politicians have vocally supported fracking. Moreover, this research will be funded by EnCana, the very company whose drilling and fracking operations may have caused the groundwater contamination in question.

“The EPA conducted an investigation into the contamination of our aquifer, and discovered that drilling was responsible,” said John Fenton a rancher from Pavillion. “But rather than finish, they knuckled under to political pressure and turned the investigation over to the very state and company that denied there was a problem in the first place. President Obama needs to tell the EPA to reopen its investigations.”