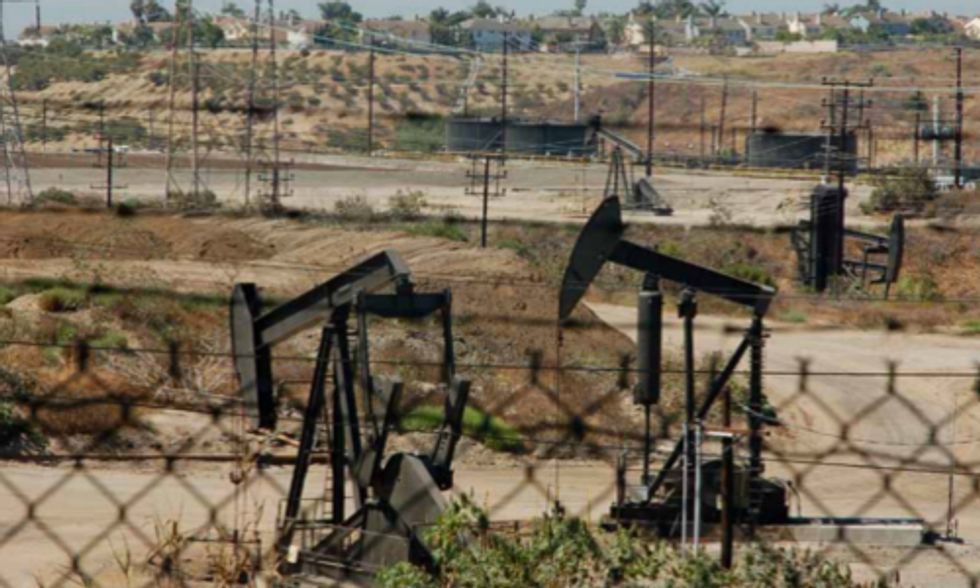 A new report shows that 5.4 million Californians—more than 14 percent of its 38.3 million population—live within a mile of an oil or gas well, and almost four million of those, or nearly 70 percent, are Hispanic, Asian or African-American, according to a new Natural Resources Defense Council (NRDC) report Drilling in California: Who's at Risk? Non-whites make up slightly more than 40 percent of California's total population.

“California’s communities of color have long been dumping grounds for industrial pollution—and our analysis shows that fracking is poised to pile on more if the oil and gas industry has its way,” said NRDC senior scientist Miriam Rotkin-Ellman and one of the report's authors. "From polluted skies to contaminated drinking water and hazardous waste, communities of color in California get way more than their fair share. If the oil and gas industry gets their way, drilling—and the environmental and health threats from fracking, acidizing and other technologies—will be piled onto communities already staggering under smoggy skies and unsafe water. From Los Angeles to the state’s farms and ranches, this industry must not be allowed to poison our people’s health.”

Unfortunately, it already is. Nearly two million of those people close to the wells already live in a community with a disproportionate amount of air, water and soil pollution, due to nearby industrial plants, hazardous waste facilities and toxic clean-up sites as well as transportation corridors. Nearly 92 percent of those residents are non-white, a group at outsized risk for respiratory conditions like asthma.

And the problem will likely grow worse, giving the growth of fracking in those areas, the NRDC report says. A majority of the expansion is in Los Angeles County, the nation's most populous county with more than ten million residents, and Kern County, immediately to the north, with nearly 900,000 million people. And with untapped reserves in the Monterey Shale Formation, there's concern in other counties, such as nearby Santa Barbara, where a November ballot initiative to ban fracking has attracted more than $5 million in opposition from oil companies.

The report takes a closer look at what's going on in Los Angeles and Kern counties. It finds that one in three Los Angeles County residents live within a mile of one of the county's more than 6,ooo oil and gas wells and that more than 75 percent of those people were non-white. White people tend to live in communities both farther from oil and gas wells and with lower levels of pollution. Los Angeles County has an ordinance being drafted to place a moratorium on fracking and other risky extraction methods that is set to go to city council for a vote soon.

Kern County, which sits on a large portion of the Monterey Shale Formation, is ground zero for oil and gas production, with 75 percent of the state's 85,000 active and new wells. There, 35 percent of the county's residents live within a mile of at least one well and 58 percent of those are non-white. And half of the county's residents—75 percent of those people of color—already live in one of the state's most polluted communities. Again, white people, the largest group of Kern County residents, live farther from wells and in communities that already have lower levels of pollution.

"This underscores the need for California to place an immediate moratorium on expanded fracking and other controversial extraction techniques, to give the state time to fully analyze the risks and how to protect against them," said Rotkin-Ellman. "Without careful evaluation of health threats before fracking is allowed to continue in California, these communities could pay a high price for California’s oil boom—the health and safety of their families."