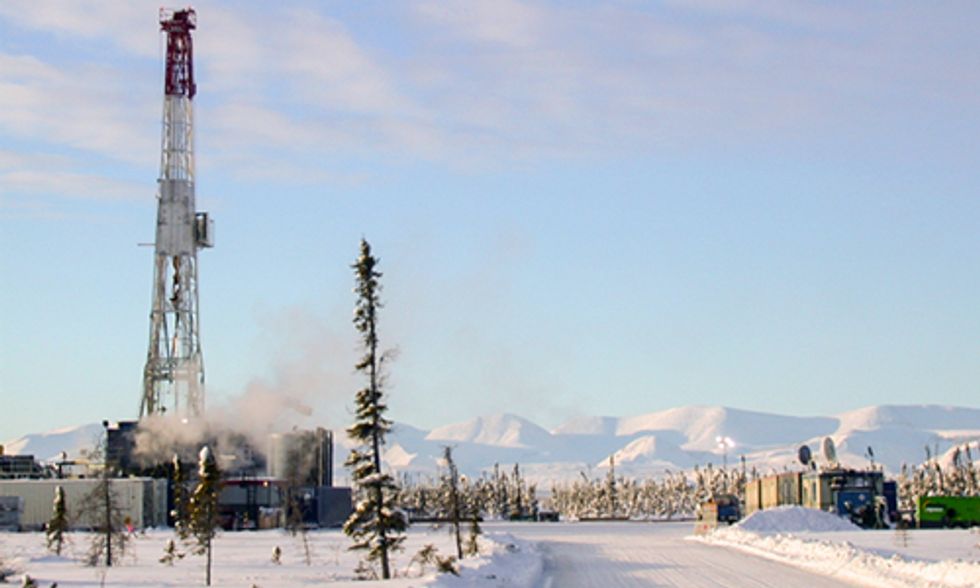 Among the dozens of rivers that flow unfettered through the Canadian North, the Natla and the Keele may be the most picturesque and culturally important. They are especially significant to the Dene people of the Sahtu region, which straddles the Arctic Circle in the Northwest Territories. Both of the rivers flow crystal clear out of the Mackenzie Mountains along the Yukon/Northwest Territories border before coming together in their final course to the Mackenzie River.

For hundreds—if not thousands—of years, the Mountain Dene people have been traveling upstream to salt licks that draw caribou, moose and mountain sheep down from the high country in the early fall. For the Dene, it's the best opportunity to stock up on wild game, fish and berries for the long winter.

Many Dene people living in Sahtu and in other parts of the Canadian North are concerned that this way of life may be at risk now that two energy companies have been given the go-ahead to begin horizontal fracking in a region just south of the Arctic Circle. Conoco-Phillips has already fracked two test wells in the Sahtu, and the company has plans to frack several more in the future.

With several other companies ready with plans of their own, the stakes are high. No one knows yet exactly how much shale oil and gas there is in the Yukon, Northwest Territories and territory of Nunavut. But the government of the Northwest Territories estimates that the Canol Shale underground deposit, which extends from the mountains along the Yukon border several hundred miles east towards Colville and Great Bear lakes, contains 2 to 3 billion barrels of recoverable oil, as much or more than in the highly productive Bakken formation in North Dakota.

Such potential reserves have drawn significant interest and mark the first time that hydraulic fracturing, or fracking, for oil and gas has moved this close to the Arctic Circle in Canada.

Critics fear that fracking could pollute groundwater and trigger gas releases and seismic activity. Scientists say that many sensitive ecosystems of northern Canada—which include tundra, peat bogs, fens and permafrost zones—may be especially vulnerable to the large-scale disturbances that occur in areas of high fracking activity. Deborah Simmons, executive director of the Sahtu Renewable Resource Board, has expressed concerns about cleaning up oil and chemical spills in the region’s many wetlands.

Some also worry about the so-called “boomtown effect” that comes with rapid development in remote and unpopulated areas—a phenomenon that is swiftly changing parts of North Dakota, Pennsylvania and other U.S. states affected by so-called “unconventional” drilling for oil and gas.

And residents of the Yukon and Northwest Territories residents fear, as a recent study has suggested, that these remote and sparsely populated territories have neither the governmental expertise nor the infrastructure to evaluate fracking initiatives or deal with the consequences. The Sahtu region has fewer than 1,500 people.

The rich Canol shale deposit lies in the heart of the Northwest Territories. Map credit: AANDC

Jim Tredger, a former high school principal who represents the largely aboriginal community of Mayo-Tatchun in the Yukon legislature, describes the future of fracking as a “defining moment in our history.” He and others successfully called for a moratorium on shallow fracking in the Yukon so that a full public review could assess the health and environmental risks. But the Northwest Territories is moving more swiftly to embrace fracking.

Conventional drilling for oil in the Sahtu region is nothing new; Imperial Oil, the Canadian subsidiary of ExxonMobil, has been extracting oil from the Mackenzie River for nearly 70 years.

But energy exploration has accelerated dramatically in recent years, in part because fracking has made it easier for companies to tap into reserves that were previously too difficult to exploit. To date, active licenses in the Canol shale region cover 1.35 million hectares of wilderness.

John Hogg, vice-president of exploration and operations at Calgary-based MGM Energy Corp, recently told the Financial Post newspaper in Canada that this shale oil play is as big as any in Canada. In testimony before a Yukon select committee on fracking, Hogg said that shale resources can be exploited in a responsible manner provided environmental regulations are in place. Shale oil and gas, he suggested, may be the key to the Yukon attaining energy self-sufficiency.

An oil pipeline corridor that is already along the Mackenzie River could theoretically send this newfound energy south in the future. The National Energy Board, the chief regulator in Canada, has also approved plans by Trans Canada—the company behind the controversial Keystone XL pipeline in the U.S.—to build a $16 billion natural gas pipeline from the Arctic coast to Alberta. Low natural gas prices and increased U.S. production have put that project on hold.

Husky Energy Inc., MGM Energy and Shell Canada are also in the Sahtu region, building roads and conducting vertical tests in the oil-rich area. In June 2013, the Sahtu Land and Water Board reversed previous decisions that required a full environmental impact assessment for exploratory wells.

One of the latest studies on hydraulic fracturing, published in the journal Science last year suggests that the environmental risks associated with fracking can be managed, but only if understanding of the fate and transport of contaminants is improved and if long-term monitoring and data dissemination is increased. For both the Northwest Territories and the Yukon this would be difficult to do. Unlike many regions in the south, groundwater aquifers have not been mapped.

Opposition in northern Canada—which comes from aboriginal groups, environmental organizations, and a Parliament of Elders in the Northwest Territories—has recently called for a moratorium on fracking in the Northwest Territories. These actions come on the heels of a Council of Canadian Academies expert panel report that points to unassessed risks and unknown impacts stemming from this controversial form of drilling.

The Council of Yukon First Nations has also vowed that they will not allow fracking on lands they control. In the face of this opposition, Conoco-Phillips and Husky have taken a pause for a year to address the concerns and questions that have been put forward.

“Fracking has the potential to affect everyone across the North,” says Doug Yallee, a Sahtu trapper, and former councilor for the local government in the Sahtu town of Tulita. “It is a new technique in the Northwest Territories and we do not have enough information about it. We know it is banned in many places around the world because of concerns similar to ours.”

Hydraulic fracturing has proven to be more controversial in Canada than in the U.S., which has undergone a fracking boom in recent years. The government of Quebec has already banned fracking because of concerns about groundwater. The government of New Brunswick recently introduced regulations that put limits on the kind of water that fracking operations can use.

Hydraulic fracturing involves the injection of sand, water and chemicals at high pressure into shale formations deep underground, shattering the rock and allowing small pockets of natural gas or oil to escape from the shale. Depending on geology and how deep a frack must be, several million gallons of water can be used to frack a single well. In many cases, energy companies inject the wastewater back into aquifers.

Scientists such as the University of Alberta’s Karlis Muehlenbachs, a geochemist, have pointed out that boreholes can and do leak when industry doesn’t follow the best practices or when cement casings fail. A 2011 study in the Proceedings of the National Academy of Sciences showed “systematic evidence” of methane contamination of drinking water in aquifers in northeastern Pennsylvania and upstate New York associated with shale-gas extraction.

Fears that groundwater and rivers like the Natla and the Keele may be polluted have been reinforced by fracking efforts that recently went wrong in Alberta. It took Canadian Natural Resources $50 million and more than nine months to cap a continuing series of spills that were caused by a form of fracking—steam injection in this case—at one of its wells last year. More than 12,000 barrels of bitumen seeped through to the surface in what has turned out to be the fourth largest spill in Alberta history.

Bob Bromley, who represents a district from Yellowknife in the government of the Northwest Territories, is calling for a transparent public review on fracking like the one currently underway in the Yukon. He and others have pointed out that the government may have violated its own legislation by failing to call for an environmental assessment before approvals were given to Conoco-Phillips and Husky.

“People from all across the Northwest Territories have contacted me expressing their concerns about what’s going on,” he said. “There’s a real fear for groundwater, for the health and safety of people who live in the region, and for how this will contribute to global greenhouse gas emissions.”

The government of the Northwest Territories has made it clear that it intends to stay the course on fracking. “[Fracking] is not without risk,” concedes Michael Miltenberger, the Northwest Territories’ Minister of Finance, Environment, and Natural Resources, who has championed water issues for more than a decade. “That’s absolutely clear. The issue is whether we can manage this … I think we can protect the environment while expanding our economic base.”

Mark Jaccard, an environmental economist at Simon Fraser University, says that the local economic benefits of fracking in the Yukon could outweigh the environmental risks. But that can only happen, he says, if the government establishes tough environmental regulations from the start, which has yet to be done.

"Better that industry not get started rather than make a mess," he told the Yukon select committee on fracking. He said what most concerns him is that Canadian energy developments, including Alberta’s tar sands, are proceeding rapidly without consideration for how emissions from these new fuel sources will affect the global climate.