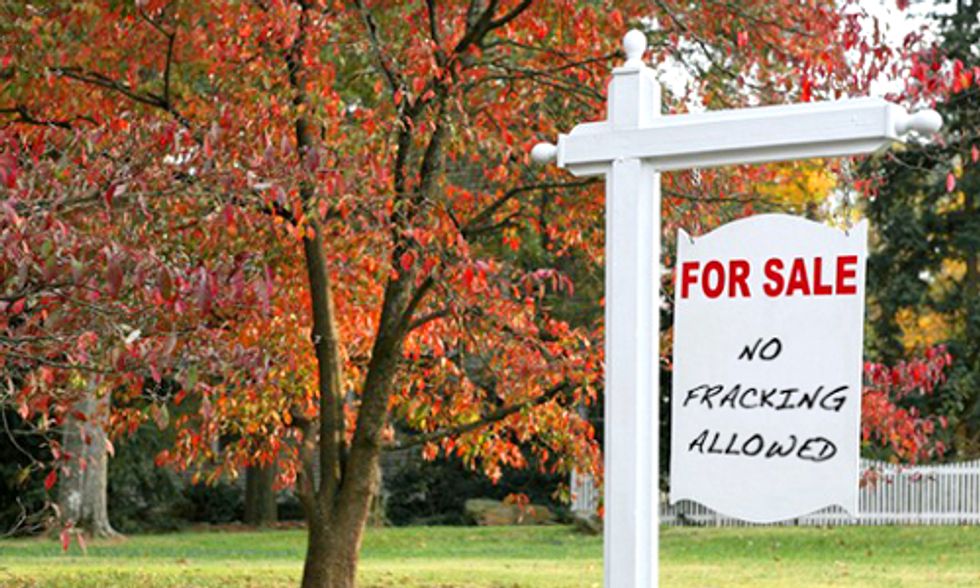 Drilling conflicts are almost always described in the context of their impacts on air, water and health. But increasingly, as the drilling boom sweeps the country, another part of the drilling story is starting to bubble up in drilling hotspots like Colorado, Pennsylvania, New York, Wyoming and Texas.

Increasingly, oil and gas development is butting up against, and often trampling, the bedrock American principles of property rights and the value of one’s home. The map below shows all the shale gas in play in North America.

Industry estimates peg the number new wells that will be drilled across the U.S. over the next decade at more than 200,000. In this rush to tap once unreachable deposits, oil and gas development is pushing the boundaries of drilling. Innovations like fracking and horizontal drilling mean nothing is out of reach. Once the province of wide open spaces, drilling rigs now regularly inch up and even into communities that never anticipated having to address problems like round-the-clock noise, storage tanks, drums of toxic chemicals, noxious fumes, and pipelines near homes, schools, playgrounds and parks.

This clash of large-scale industrial activity and communities has surfaced a deep rift in the American landscape, where the legal doctrine of split estates allows one party to own mineral rights and someone else to hold the rights to soil and surface. With the oil and gas industry showing little self-restraint in where drilling happens, and almost no regulatory or legal precedents to protect them from having industrial activity in their back yards, communities are fighting back. Increased truck traffic, chemicals, lights, noise, heavy equipment, noxious air emissions and water contamination are liabilities for landowners, to the point that communities in Colorado, New York and other states have taken matters into their own hands.

Feeling unprotected by weak state and oil and gas regulations—most of which were developed never contemplating drilling in urban and suburban landscapes—towns, cities and counties are instituting moratoria and bans on drilling within their borders. There are fracking-related ballot measures in at least four Colorado communities this year.

But it’s not just "not-in-my-back-yard"-ism driving this reactive opposition. The financial risks posed by drilling are real and substantial enough, for example, that banks and insurers are adopting guidelines that forbid mortgage loans or insurance coverage on properties affected by drilling. It’s a battle between oil and gas and the nest egg of countless Americans.

The following examples begin to piece together the ways in which the threats posed by drilling and the deep pockets of the oil and gas industry quite literally hit home. Taken together, they are a call for decision-makers to start quantifying data and asking tough questions about drilling vs. the American Dream.

In the Catskills, fracking fears have already impacted the real estate market even though the state has yet to make a determination on whether to allow drilling. The prospect that the state will open the region to drilling, as the New York Times reported, “has spooked potential buyers” in upstate New York. The Times story also quoted a realtor who shut down her business In Wayne County, Penn. Agents there, the woman said, are having trouble selling rural properties “because people don’t want to be anywhere near the drilling.”

A study conducted by researchers at Duke University found that the risks and potential liabilities of drilling outweigh economic benefits like lease payments and potential economic development in Washington County, PA. Even though lease payments can add overall value to homes with wells drilled on them, the possibility of contaminated water decreases property value by an average of 24 percent. The boost that comes from signing a lease offsets the increases, leaving a net decrease in value of 13 percent.

A 2010 study of the Texas real estate market in the heavily drilled suburban-Dallas area near Flower Mound concluded that homes valued at more than $250,000 and within 1,000 feet of a drilling pad or well site saw values decrease by three to 14 percent.

Faced with a boom in coal-bed methane development in the early 2000s, officials in La Plata County, CO studied the impacts of oil and gas development and found that properties with a well drilled on them saw their value decrease by 22 percent.

In a 2005 peer-reviewed study, researchers found that oil and gas production “significantly affect the sale price for rural properties.” The study determined that the presence of oil and gas facilities within 2.5 miles of rural residential properties in Alberta, Canada reduced property values between four and eight percent, with the potential for doubling the decrease, depending on the level of industrial activity.

In Pavilion, WY, where the EPA has linked groundwater contamination with fracking, Louis Meeks saw the value of his 40-acre alfalfa farm all but disappear completely. In 2006, his land and home were appraised at $239,000. Two years later, as ProPublica reported, “a local realtor sent Meeks a coldly worded letter saying his place was essentially worthless and she could not list his property. ‘Since the problem was well documented … and since no generally-accepted reason for the blowout has been agreed upon,’ she wrote, ‘buyers may feel reluctant to purchase a property with this stigma.’ ”

Similar nightmares have befallen residents of Dimock, PA, where fracking problems decimated home values, and the drilling company responsible, Cabot Resources, was ordered to pay impacted fam­i­lies' set­tle­ments  worth twice their property values, a total of more than $4 mil­lion.

The threats posed by oil and gas drilling and the deep pockets of the industry quite literally hit home, decreasing property values and seizing land rights.

In North Texas, the Wise County Central Appraisal District Appraisal Review Board knocked down the appraised value of one family’s home and 10-acre ranchette from $257,000 to $75,000—a decrease of more than 70 percent. The board agreed to the extraordinary reduction as a result of numerous environmental problems related to fracking—just one year after the first drilling rig when up on the property.

Boulder, CO, real estate agent Nanner Fisher, who has lived in the area since 1983, told the Boulder iJournal that selling properties near drilling operations is difficult. “For the most part, if there is a well that’s visible when you show a property, [the prospective buyer] will ask to look for something else. A lot of it is the visual effect of the well site,” she said. “And, they think if you can see it, it’s gotta be close enough that it’s not healthy. It’s the same thing that’s been going on with electrical lines for years. People don’t want to live under power lines, either.”

Potential buyers, another Colorado real estate agent wrote recently in a column, “balk at buying a home near a drilling or fracking site … The flip side of that same coin is that there are homeowners struggling to sell their home near these sites because of low buyer interest. They often have to sell at significantly lower prices than when originally purchased due to the oil and gas industry neighbors.”

In at least 39 states, there are laws that compel “holdout landowners” to join gas-leasing agreements with their neighbors, allowing oil and gas companies to drill horizontally to tap into oil and gas reserves that cross property lines—whether the owner of a property wants to allow the drilling or not. Called “mandatory pooling” or “compulsory integration,” these laws basically create eminent domain by private enterprise.

Pooling gives the owner an interest in the well, including royalty payments, but as in Colorado, where forced pooling orders were issued by the state’s Oil and Gas Conservation Commission 48 times in 2010, the law also makes the unwilling owner “liable for the further costs of the operation, as if he had participated in the initial drilling operation.”

The intent of forced pooling is to create more orderliness in drilling underground oil and gas reserves, which rarely adhere to the patchwork of surface ownership. Forcing holdout landowners into leasing agreements is supposed to lead to fewer wells drilled and more efficiency in the ones that are. But it’s also frequently used as a threat by landmen looking to cash in on leases.

Recognizing the numerous ways that drilling and fracking could damage value, the mortgage industry is starting to refuse to take on the financial liabilities and is tightening policies that prohibit lending on properties with wells on them or that are subject to leasing.

According to a white paper prepared for the New York State Bar Association, Wells Fargo, one of the largest home mortgage lender in the U.S. is cautiously refusing to make home loans for properties that have gas drilling leases attached to them.

The backgrounder prepared by the NYSBA about gas leasing impacts on homeowners also includes a section on residential mortgages and says the combination of home-ownership and drilling, “creates a perfect storm begging for immediate attention.” Risks include:

A Pennsylvania couple was recently denied a new mortgage on their farm by Quicken Loans because of a drilling site across the street. According to the lender, “gas wells and other structures in nearby lots…can significantly degrade a property’s value” and do not meet underwriting guidelines. Two other lenders also denied the family mortgages.

Federal lending and mortgage institutions (FHA, Fannie Mae, Freddie Mac) all have prohibitions against lending on properties where drilling is taking place or where hazardous materials are stored. A drilling lease on a property financed through one of these agencies would result in a ”technical default.” FHA’s guidelines also don’t allow it to finance mortgages where homes are within 300 feet of an active or planned drilling site.

Homeowners who think damage to property incurred by drilling accidents is covered by insurance need to think again. Such damages are typically not covered.

Last July, Nationwide Insurance spelled out specifically that it would not provide coverage for damage related to fracking. According to an internal memo outlining the company’s policy, “After months of research and discussion, we have determined that the exposures presented by hydraulic fracturing are too great to ignore. Risks involved with hydraulic fracturing are now prohibited for General Liability, Commercial Auto, Motor Truck Cargo, Auto Physical Damage and Public Auto (insurance) coverage.”

Often, a driller or well operator’s insurance won’t cover damages, according to the NYSBA summary. Homeowners may have to sue for damages and, even if they win, may not get paid for all damages since drillers admit in their regulatory filings that they may not carry enough insurance.