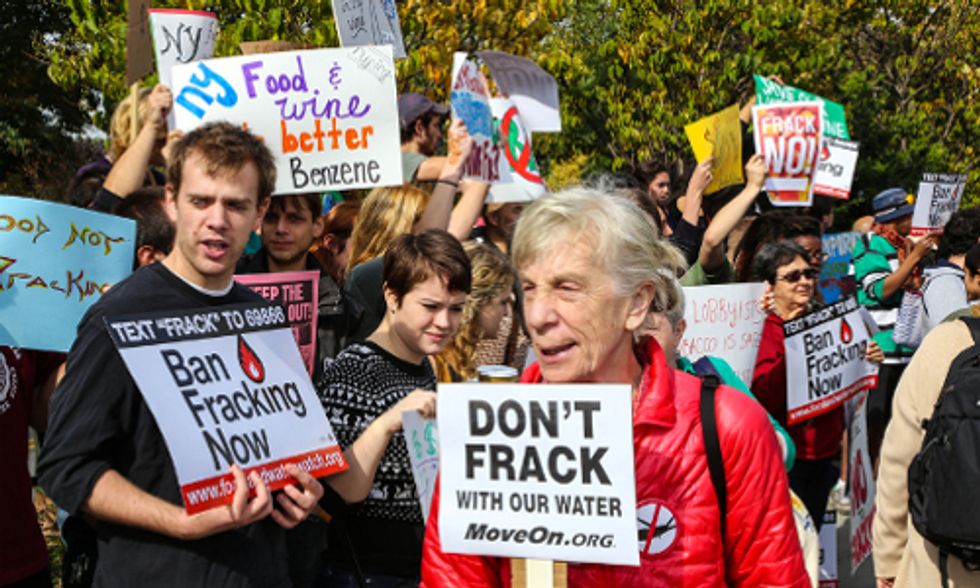 While opinion has shifted against fracking in all age groups, younger adults now overwhelmingly oppose it.
Photo credit: Shutterstock

As more stories emerge about the dangers posed by the toxic fallout from the aggressive drilling process to communities near the operations, support for fracking tilts negative for the first time, with 41 percent favoring increased use of fracking and 47 percent opposing it. That's a huge swing from 20 months ago. In Pew's March 2013 poll 48 percent supported more fracking while only 38 percent opposed it.

Support for fracking has dropped most steeply among women and people under 50, whose opinions turned against it by 10 points, while shifting slightly against it among those over 50 by two points. Fifty-four percent of women now oppose fracking, with only 31 percent supporting it. Among men, 52 percent support it with 40 percent opposed, representing a three-point drop from March 2013. People 18-29 moved from 49/41 in support to 53/39 against, while those 30-49 who formerly favored it 48/41 now oppose it 50/38.

Pew notes, "There has been a particularly dramatic change in views of fracking among those in the Midwest. In March 2013, 55 percent of Midwesterners favored expanded fracking while 32 percent were opposed. Today, 47 percent oppose more fracking while 39 percent support it." Support remains strongest in the south where it's still favored 45/42. But even that represents a seven-point shift toward opposition, from 52/34 just 20 months ago.

Unsurprising, there's a huge partisan divide. Among Republicans, 62 percent support fracking, while only 29 percent of Democrats do. Independents showed one of the biggest shifts of any group, moving from 51/36 percent in favor to 53/37 percent against, a swing of 14 points.

The Pew Poll also showed a move toward more environmentally friendly policies in other areas. By a 64/31 majority, Americans support strongly limits on greenhouse gas emissions from power plants to address climate change. Republicans are split 47/47, while Democrats and independents favor emissions limits such as those President Obama announced last June, showing that the aggressive drive by congressional Republicans to block such limits is way out of touch with their constituents.

And while Americans still overwhelmingly support building the Keystone XL pipeline by 59 percent to 31 percent, even that support is diminishing, although less rapidly. In March 2013, 66 percent favored the project. Then, 54 percent of Democrats supported it; now only 43 percent do. Support has plunged among independents from 70 percent to 58 percent, while holding steady among Republicans at 83 percent.