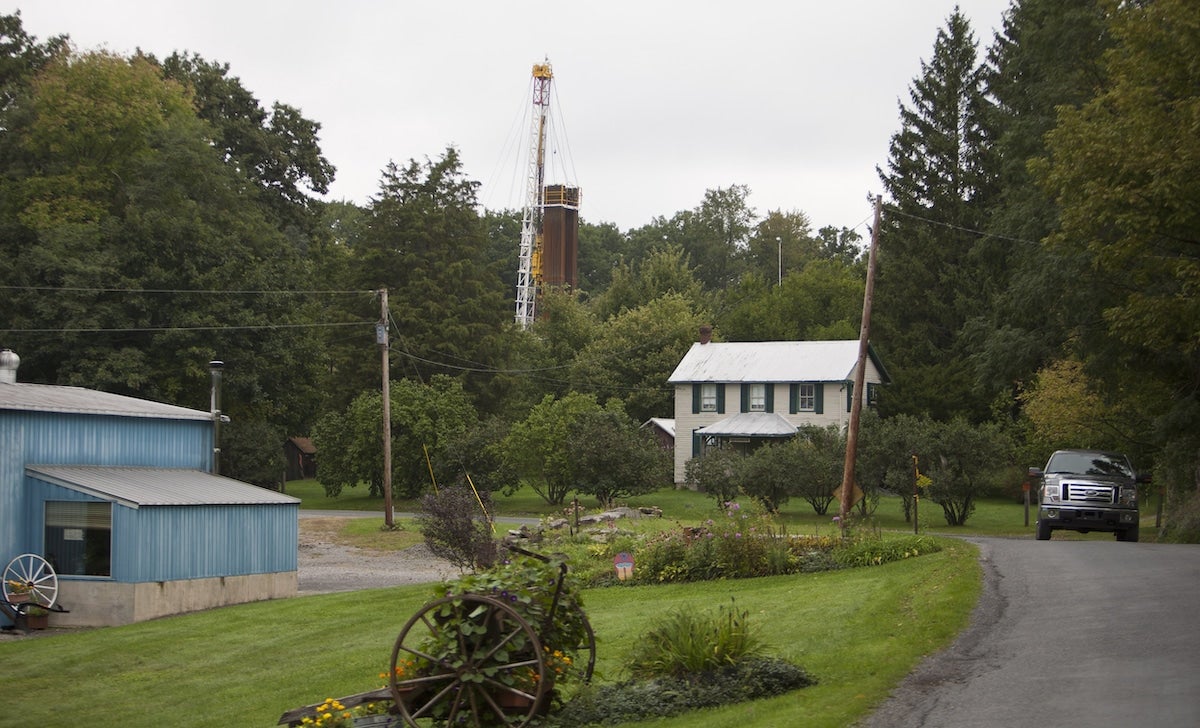 A home near a rig for drilling and fracking for natural gas near Calvert, Pennsylvania. Robert Nickelsberg / Getty Images

Pennsylvania children who grew up near oil and gas fracking sites are at higher risk for leukemia, a study published Wednesday in Environmental Health Perspectives finds.

The study’s findings are consistent with a plethora of research on health risks associated with fracking. Yale researchers using Pennsylvania cancer registry data, found children between the ages of 2–7 years-old who lived near (within 2km, or 1.25 miles of) a fracking site were more than twice as likely to be diagnosed with acute lymphoblastic leukemia. Children born to pregnant people who lived near fracking sites are at triple the risk.

Acute lymphoblastic leukemia, though it has a relatively high survival rate, frequently leads to additional problems later in life, including cognitive disabilities and heart disease. Two kilometers is just over 6,500 feet, but Pennsylvania law only requires a 500-foot setback between fracking wells and homes. Colorado only requires 150 feet.

As reported by DeSmog:

“This new study connects a lot of dots,” biologist Sandra Steingraber, co-founder Concerned Health Professionals of New York, who was not involved in the study, told DeSmog. “As such, this study is a kind of terrifying voila,” Steingraber said, adding that the methodology in the study is “really robust.”

For years, the Concerned Health Professionals of New York has compiled and published a compendium of scientific and medical findings of the human health impacts from fracking.

“These findings from this case-control study both corroborate and extend a rapidly growing body of evidence — now documented in more than 100 studies — showing that fracking is a public health crisis,” Steingraber said. “All together, these studies, new and old, show us that fracking in Pennsylvania is not safe for Pennsylvanians — even those living a mile or more away. In fact, it’s a moral obscenity.”

The Guardian, Inside Climate News, NPR State Impact, DeSmog, The Independent, The Hill

Environmental Toxins 101: Everything You Need to Know
When it comes to environmental toxins, many of us conjure
By Libby Leonard
Wildfire Smoke Is Reversing U.S. Air Pollution Gains, Study Finds
If you live in the Western U.S., you’ve probably woken
By Olivia Rosane
Umbilical Cord Blood Tests Reveal Widespread PFAS Contamination
Five years of research, more than 40 studies, and over
By Paige Bennett