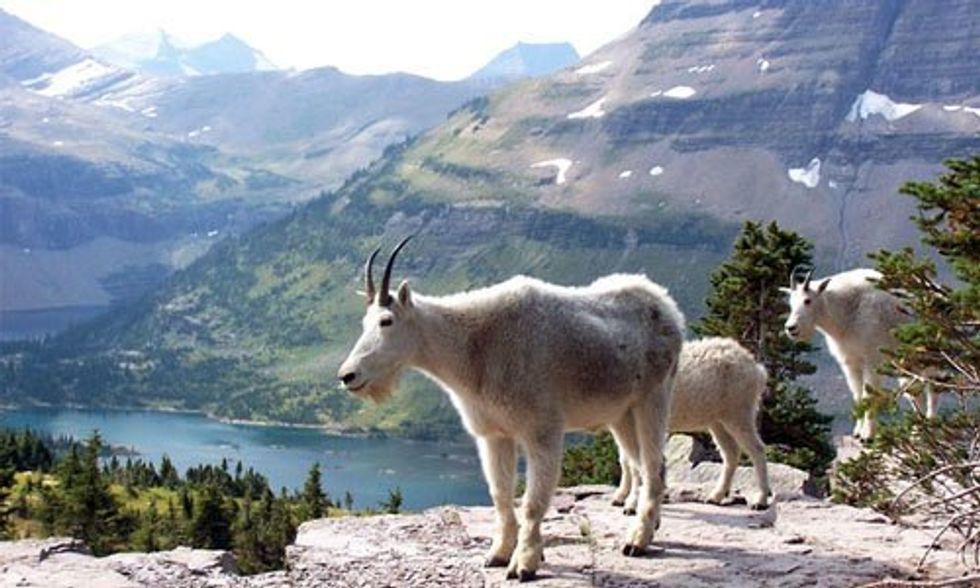 America’s national parks cover nearly 52 million acres—an area roughly the size of Kansas—and contain some of the most incredible natural landscapes in the country. Sweeping valleys, frosted mountain peaks and immaculate waterways host a range of incredible wildlife, many of which are threatened or endangered.

National parks are also public lands, maintained by the federal government with taxpayer money. They are, quite literally, our land. But while national parks are highly protected, the land surrounding them—as well as other public land like national forests and state parks—are much more vulnerable to exploitation under U.S. law. Now, frackers want to take advantage of that. That's bad news for the wildlife and waterways that cross park boundaries.

Oil and gas companies already have the rights to frack on some 30 million acres of public land in the U.S., but they want more. In fact, they’re targeting more than 200 million additional acres of public lands for fracking, much of it in national forests, state parks and the areas surrounding national parks.

Here are just a few places at risk:

National parks like Glacier are technically protected from extractive industries like fracking within their bounds. But the land surrounding them? Frackers say that’s fair game.

Already, the National Parks Conservation Association states that visitors to Glacier's eastern boundary can “throw a stone and hit any of 16 exploratory wells and their associated holding tanks, pump jacks and machinery.”

White River National Forest, in central Colorado, is the country's most visited national forest. It’s home to incredible wildlife—deer, elk, bears, mountain lions and more. None of this has stopped fossil fuel companies from pursuing the rights to frack on roughly 250,000 acres of the forest.

And earlier this year, fracking lobbyists fought back against an administrator’s attempt to restrict drilling on forest land.

The largest national forest in the U.S., Virginia’s George Washington National Forest has been at the center of a heated discussion about fracking’s future in the southeast. Last November, Forest Service officials approved fracking on 177,000 acres, roughly 17 percent of the forest’s land.

Fracking isn’t only an issue on federally managed land. Some states have been quick to let oil and gas companies enter their state parks and Pennsylvania is one of them. Most of the state sits on top of the Marcellus Shale, a hotbed of fracking activity in the U.S.

Pennsylvania has already opened 700,000 acres of state land to industry, with much of the activity located in Sproul State Forest.

Western North Dakota already hosts 45,000 operational drilling wells, with more to come. Noise from truck traffic can already be heard within the park and signs on the park’s southern border warn visitors of the hydrogen sulfide gas that pollutes the air surrounding wells. This is especially detrimental to wildlife that come and go through the park's borders into land now leased to frackers.

The Dangers of Fracking

Fracking is more expensive, more polluting and more dangerous than renewable energy. It releases methane, a greenhouse gas at least 85 times as powerful as carbon dioxide at disrupting the climate.

Fracking has also been linked to major air pollution and water contamination. Communities near some fracking sites have even reported being able to light the water coming out of their kitchen sinks on fire due to gas contamination.

Industry lobbyists have succeeded in delaying federal regulations on fracking, meaning the majority of fracking activity continues to take place unseen and unchecked. Even with proper oversight, there is no such thing as safe fracking—spills, leaks and other "fraccidents" are bound to occur.

In a world where we can have clean, affordable energy from the wind and the sun, why should we pursue fracking in the first place?

Fracking is diverting money and attention from the long-term solutions we need for a sustainable energy system, while contributing to global warming and environmental degradation. For the sake of our health, our climate and our public lands, it’s time to ditch fracking and start focusing on the clean energy future we need.

Chile to Create One of World’s Largest Marine Parks