14 Pipeline Projects in 24 States … Which Will Be the Next Battleground? 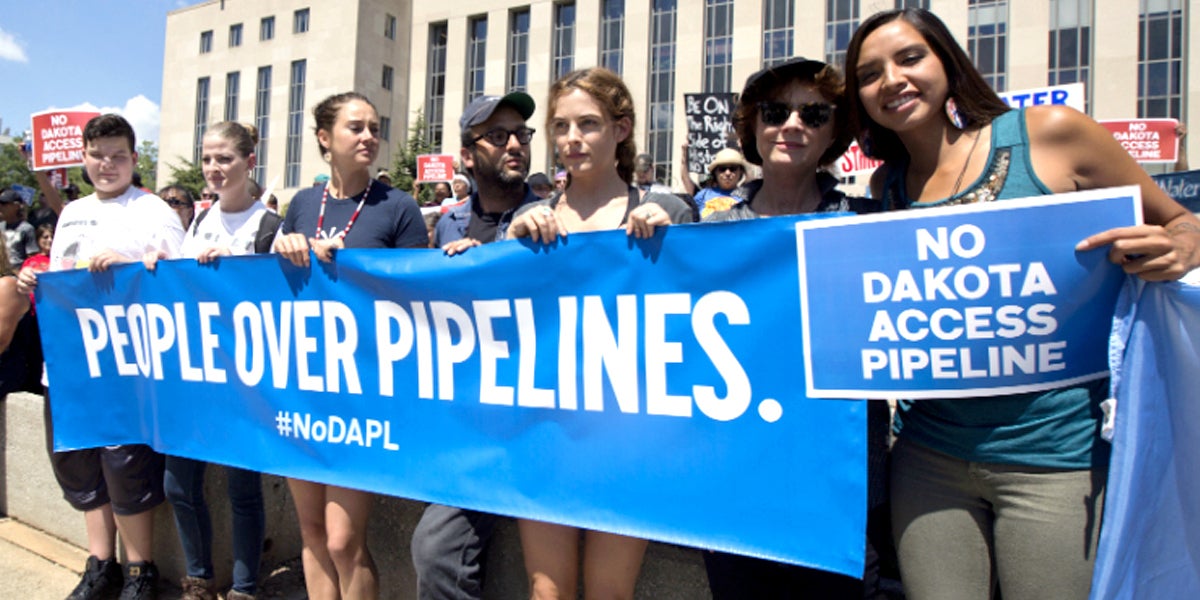 Encouraged by the Obama administration’s shelving of the Keystone XL pipeline and its revoked authorization for construction of the Dakota Access Pipeline on federal lands, activists are now eyeing new battles.

At least 14 new pipeline projects are in the works, carrying both oil and natural gas. These projects involve at least 24 states, adding to the existing 2.5 million miles of energy pipelines in the U.S.—the largest network in the world. Driven by low natural gas prices and the fracking boom, these new pipelines will cross major urban areas as well as important watersheds. 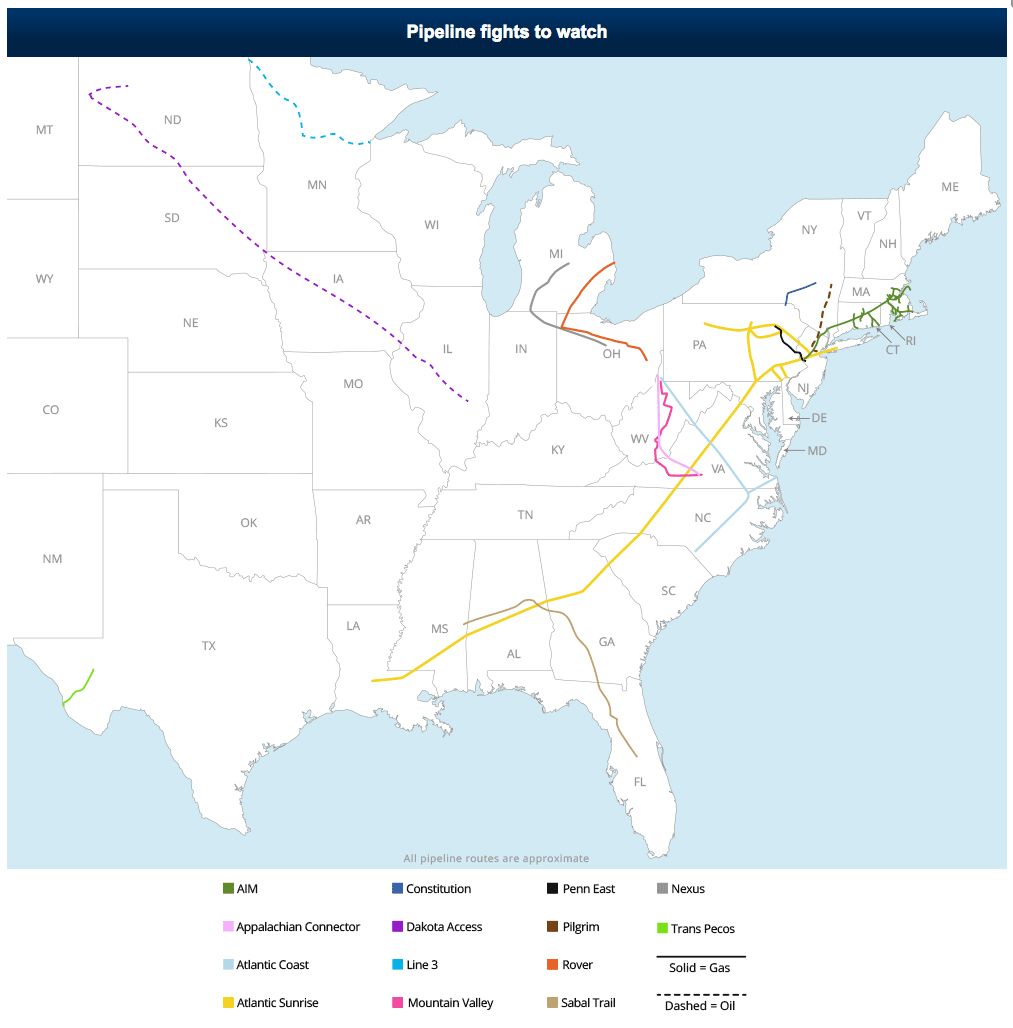 Some of the proposed pipelines being monitored by activists.Oil Change International/E&E Publishing

Supporters say that they supply energy needs for many communities, provide jobs and are safer for oil transport than truck or rail. Take the case of the Atlantic Sunrise pipeline expansion. Running from Louisiana through the Southeast all the way to Long Island, New York, the project is an expansion of an existing Transco pipeline operated by Tulsa, Oklahoma-based Williams Companies.

Counting branch pipelines, Transco is a 10,200-mile system that can move 10.9 billion cubic feet of natural gas per day. The company transports 10 percent of the natural gas consumed in the U.S., but it was built to move gas mainly from the Gulf of Mexico to the Northeast.

Now, the Marcellus Shale in Pennsylvania provides lower-cost gas and the Atlantic Sunrise will be reconfigured to move product south. In 2014, 1,370 wells were being drilled in the Marcellus, with high-yield wells using hydraulic fracturing, or fracking. The Marcellus provides more than 36 percent of the shale gas produced in the U.S.

Williams Companies said that construction of the pipeline expansion in Pennsylvania will create 2,300 jobs for one year, with 15 permanent full-time jobs after that for operation and maintenance. Citing U.S. Department of Transportation (DOT) statistics, the company’s website states that “pipelines are the safest method for transporting energy.” They add that their safety practices include 24/7 monitoring of the pipeline.

But critics aren’t convinced. While pipelines are, statistically, far safer than trucks or trains, “When a pipeline does fail, the consequences can be catastrophic,” ProPublica said.

On a quiet Thursday evening, six years ago this month, a massive blast shattered the peace of San Bruno, California, as a tower of fire erupted from a natural gas pipeline under the city of 41,000. Whipped by fierce winds, the blaze killed eight people and severely injured 58. It destroyed or damaged 55 homes.

Last month, a federal jury convicted Pacific Gas & Electric of obstructing the investigation and violating pipeline safety laws both before and after the explosion.

From October 2015 to February 2016, the largest methane leak in U.S. history spewed out of a natural gas storage field near Porter Ranch, California, releasing 94,500 tons of the powerful greenhouse gas. The leak sickened thousands and forced the temporary relocation of more than 5,000 households. Methane absorbs heat more effectively than carbon dioxide.

NASA: Porter Ranch Gas Leak Was So Big It Could Be Seen From Space https://t.co/AToTYowaYC @energyaction @tcktcktck

“In the first two decades after its release, methane is 84 times more potent than carbon dioxide,” according to the Environmental Defense Fund.

Southern California agreed to pay $4 million to settle criminal charges but still faces civil actions. In March, the Los Angeles Times found leaks in 229 natural gas storage fields in California, and said that they “are often left untreated for months.”

Oil-carrying pipelines may leak or rupture, creating dangerous spills. In 2010, an Enbridge Energy pipeline released 840,000 gallons of heavy tar sands oil into the Kalamazoo River in Michigan. Oil flowed for 17 hours before the pipeline was shut down. Cleanup costs reached $1.2 billion, making this the most expensive on-shore oil spill in U.S. history.

Enbridge, the company responsible for the Kalamazoo River spill, is now seeking to pump 800,000 barrels of tar sands crude per day through North Dakota, Minnesota and Wisconsin by expanding its Alberta Clipper pipeline. This facility crosses the Great Lakes and Mississippi River, along with tribal lands including Fond du Lac, Red Lake Nation and Leech Lake Indian Reservation. Enbridge is also behind the proposed Northern Gateway pipeline, which threatens the Great Bear Rainforest in British Columbia.

While the Obama administration has put a stop to the Dakota Access Pipeline, it has permitted two pipelines linking the Permian Basin in Texas with customers in Mexico. Despite the administration’s legacy of conservation actions and its role in the historic Paris climate agreement, fossil fuel development continues unabated. The U.S. Energy Information Administration’s Annual Energy Outlook 2016 projects a 55 percent increase in natural gas production by 2040.

Which brings us back to the Marcellus Shale in Pennsylvania. The state is enjoying a boom to the tune of more than $10 billion in pipeline projects. Production from the Marcellus gas wells is outpacing the capacity to bring it to market. That’s why the Atlantic Sunrise project is seen as key to the state’s economy. But the U.S. Environmental Protection Agency (EPA) has voiced concerns about the pipeline.

The rush to build pipelines may soon result in overcapacity. Referring to two competing projects in the Mid-Atlantic, the Atlantic Coast pipeline and the Mountain Valley pipeline, the Southern Environmental Law Center said in a report published last week that they would be unnecessary if the Atlantic Sunrise project is completed and a proposed upgrade to an existing Columbia Gas pipeline goes through. 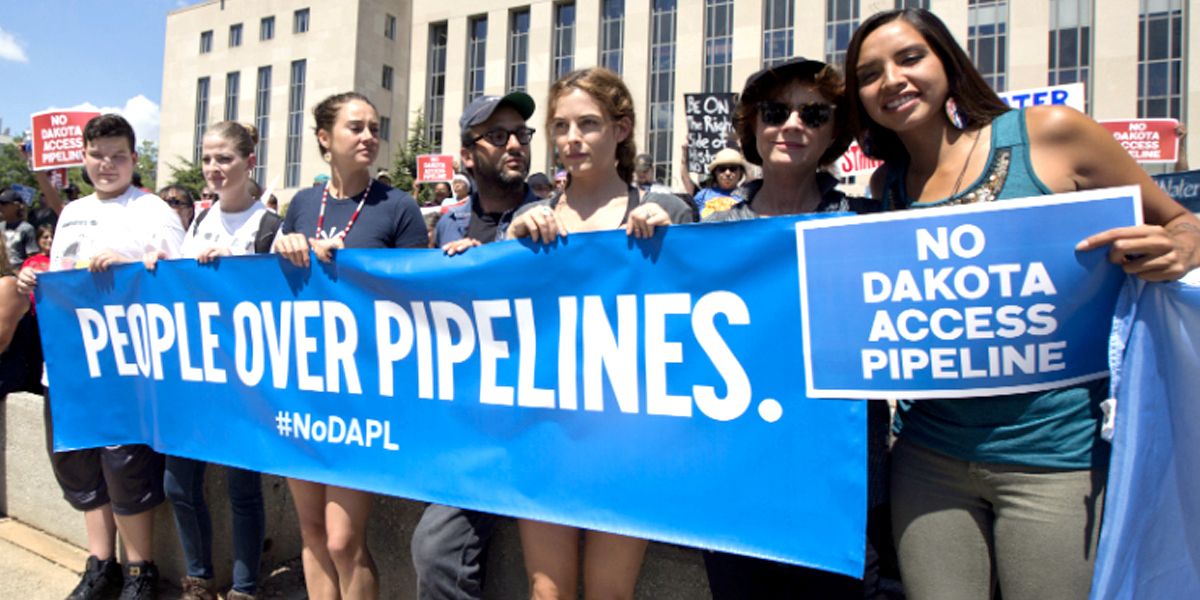 Hundreds of activists, joined by high-profile allies including Susan Sarandon, Shailene Woodley and Josh Fox, rallied outside the U.S. District Court in support of the Standing Rock Sioux Tribe on Aug. 24.

Against this background, activists look askance at every new pipeline proposal. Protests have taken place against the Atlantic Sunrise pipeline in both Pennsylvania and at FERC’s office in Washington. The Sierra Club in Pennsylvania is working to stop the pipeline. Elsewhere in the state, both the EPA and National Park Service have condemned FERC’s DEIS for the Penn East pipeline, which would connect the Marcellus Shale to markets in Pennsylvania and New Jersey. The proposed Pilgrim Pipeline is under attack in New York and New Jersey by residents and numerous conservation groups. More than 60 towns and cities in the two states have passed resolutions opposing the pipeline, which would carry oil across major groundwater aquifers and two aqueducts feeding New York City’s public water supply.

https://twitter.com/climatehawk1/statuses/776224281789210624 are cued up to be the next hot spots. They have river crossings, and there are such historic grounds of American history—literally land given by George Washington to families during the wars,” Bold Alliance President Jane Fleming Kleeb said. As pipeline builders take private property, desecrate sacred Native American land and attack protesters with dogs and mace, angry citizens prepare for future battles.